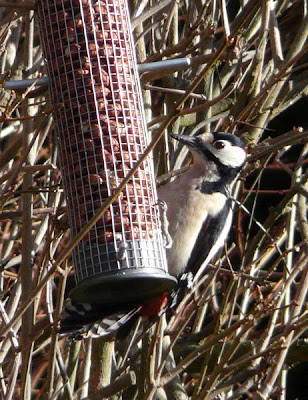 Today was generally bright and breezy. All day at the house, where the best sighting was of this male Great spotted Woodpecker on the peanuts. A Skylark was in full song out the back too but thats about it really. Jane tells me that the Treecreeper was on the nuts back at home. I had an email from Roger Forster who tells me that up to 5 Treecreepers come to feeders where he lives and have done since one started the ball rolling in 2006. Could they be the new Siskin?

Steve Gale of 'North Downs' blog has responded to my moth cry for help. He thinks that the moth I had is most probably a Dark Chestnut and goes on to say 'The forewing tip may be a little rounded, but not obviously so. The forewing shape otherwise looks good for Dark Chestnut, as does the colour. Status wise the species is recorded further north than where you are (ie local in southern Scotland, and commoner further south) although it may still be notable in your area.' So at least I get some support for my theory...

Some suggested that I take it as a specimen and get it disected to clinch the id, but I have thought about it, and have decided not to go down that road. It will just have to remain 'either/ or'...

Thanks again to everyone with their constructive comments, I am learning every day.
Posted by Stewart at 7:03 pm

Thanks for the advice on the ducks and books, a definate mothers day present I think. I will certainly check it out. I really enjoy your blog and your super photo's, I saw my first Dunnock the other day and found the whole bird watching and identification business really enjoyable.
Thanks again
Michelle
(birding about northumberland)

Great GSW picture Stewart and how lovely to hear a Skylark; always makes me think of summer!

Michelle - Go for the Lars Jonsson, you won't regret it...

Tricia - Skylarks start to sing here any tim after the last week in January and continue until late July or August when all of a sudden they go quiet and moult. Places that were ringing with them and Meadow Pipit song go eerily silent...Its nice when they start up again...