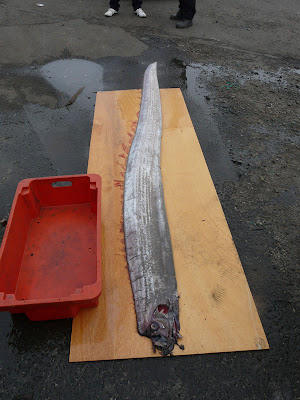 Remember the Oarfish found at Hadston on Boxing Day that may have been a first for Northumberland? Well now there's a second and a third!

This email was sent to me by its finder, an Amble fisherman called Michael Bould -

Just to let you know that my friends wife found another Oarfish - seemingly still alive - on Turnaway Sand, Amble Monday night. She photo'd it and with her son pushed it back into the water. When I came ashore from fishing on Tuesday lunchtime I took the dog for a walk with the outside chance of getting a glimpse. After walking to tide edge for about 1.5 miles south of the find site, and about to give up I saw a flash of silver half way up the beach and unfortunately the fish was there having died and washed up overnight. I will attach a photo but not too nice as they seem to deteriorate rapidly once dead. The Boxing day fish in your site was a sorry sight only 4 hours later when we took some shots.

One man that is happy at these strandings is David Whittaker from Scarborough. He has been desperate to get one for analysis and I have the latest one preserved in my freezer for him to pick up at weekend - Just heard another one came ashore at Tynemouth yesterday so he may get 2 for 1 special. The fish was 10'6" long and full of krill so has not starved to death.

Michael has done well to recover the fish so far from its original sighting. Its interesting to see that it was full of krill too. This might be a discovery in itself as so little is known about the biology of these fish.

Its great to get emails like this, cheers Michael, now if anyone out there gets a photo of a wild Northumberland Pine Marten or Polecat let me in on it too...

I have just 'borrowed this from the BBC News ... 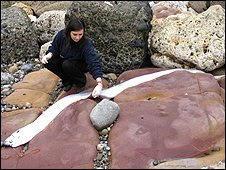 An unusual deep sea fish has been washed up on a beach in North Tyneside.

The 3m (9ft 8ins) long oarfish was found by a member of the public near cliffs at Tynemouth Pier on Tuesday.

They normally live at depths of up to 3,000ft (1,000m) in the Mediteranean or eastern Atlantic. Since 1981 only four findings have been recorded in the UK.

The specimen, which was in a good condition, has been taken to nearby Blue Reef Aquarium where experts will try to determine how it died.

Oarfish are the world's longest species of bony fish, and can grow to up to 24ft (8m) long, although there have been reports of individuals more than double that length.

Their great size, bizarre appearance and strange undulating way of swimming is believed to have given rise to many "sea monster" sightings over the centuries.

Earlier in February, a decayed specimen was found near Amble in Northumberland.[ This is the Boxing Day fish..]

Blue Reef curator Zahra d'Aronville, said: "Very little is known about the life cycle of these truly magnificent creatures and it's a mystery why two of them should have washed up on our coastlines so close together.

"This particular individual is in really good condition and there are no obvious reasons why it should have died.

"At this stage it's impossible to tell whether it was alive when it stranded or whether the currents simply washed it ashore."

I'm glad this interested the Tynemouth Aquarium, because they didn't reply to my email about the one on Boxing Day. So only 4 UK records and now three in Northumberland in 2 months...
Posted by Stewart at 7:41 pm

Photograph of the second one at Blue Reef in today's Journal.

Fascinating stuff. I'll have to do some more beachcombing.

Brian R said...
This comment has been removed by the author.
8:37 pm

God job its not in Ashington, it'd be a turtle disaster.

Mossy - Yes I think that about blogs too. As for Northumberland Bird Club, well, thats what people mean don't they. God's own country, Northumberland is a county, North Tyneside is a local authority :)
BB - Like it. It like the Ashington bloke who failed his driving test when he clipped a curb. Thats not bad you may say, but it was berb a jerb week!