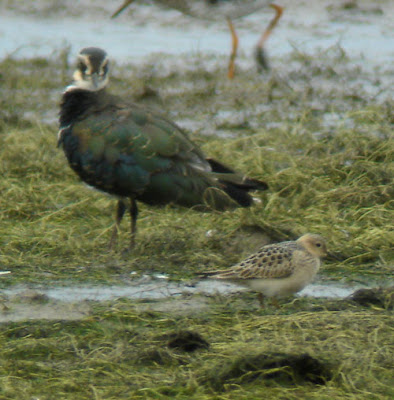 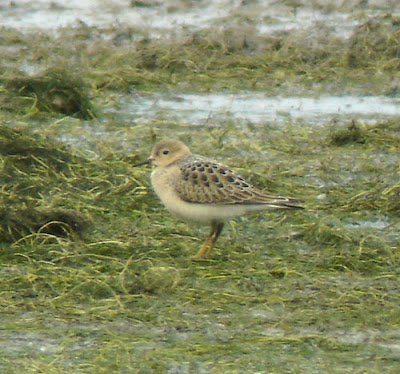 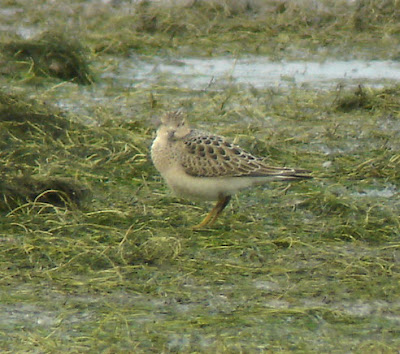 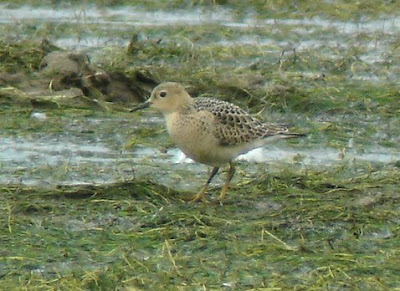 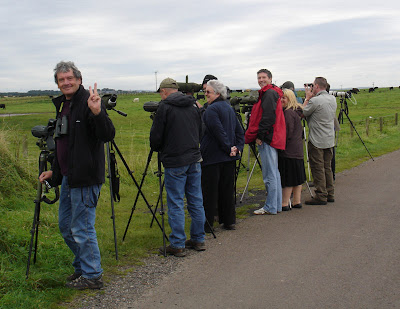 Above - from the left, amongst others, Tim Cleeves, Andy McLevy, Joe Dobinson and his lass, Alan Hall...


A text message from Andy Cowell had me off down to Cresswell Pond at lunchtime to see the Buff breasted Sandpiper he had found earlier.

These are grand little waders, striding about next to giant lapwings and huge lanky Ruffs. We used to get them more often, but this is the first I've seen for a good few years, the last one being at East Chevington with two Pectoral Sandpipers for company. We were all suprised at how small this one appeared. It was scarcely bigger than a Ringed Plover.

They are always smart looking in their honey coloured and black speckled plumage. The crown was very distinct giving it a capped appearance, and the large black beady eye was offset by a faint pale eye ring. In flight it appeared quite portly and on occasion the black 'comma' under the carpal joint could be seen.

Buff breasts breed in northern Canada and winter on the plains of South America. They usually migrate down central North America, making them scarce migrants on both American coasts. Apparently they used to be easier to see in the UK than on migration in the States!

Another good bird for the week.

About time you bu***rs got a proper job.

Is Tim saying 'Peace' or 'Peace Off with that camera?'

wondered where you were yesterday?...thought you wouldve there early, we were there just before lunch. Lot smaller bird than i expected...but lovely

Nice photos BB. Autumnn is with us, colleague had a Hudsonian Whimbrel on the Scillys this week.