On a flexi day today so I popped out for a couple of hours this morning.
The weather started off quite mild and pleasant with a light S2 and mist. The afternoon is a different story, the wind has increased to a SE6 with more rain.

At Boulmer this morning I checked the north end towards Longhoughton Steel. A few straggly brambles by the stone wall held 3 Redstarts, 1 Sedge Warbler and a Lesser Whitethroat, while further along 10 Wheatears and 2 Whinchats were perched up. A Weasel ran along the stone wall and had a jump at a Wheatear, but the bird was prepared and flew off.

34 Canada Geese flew S, my first here for 2 years, 7 Bar tailed Godwits and a Grey Wagtail were on the beach. The mere had the Black tailed Godwit and 2 Ruff.

Back in Boulmer village a lot of the migrants seem to have moved on but there were still 3 Spotted Flycatchers, 1+ Redstart, 3 Willow Warblers and a Goldcrest.

From here I ventured all of 4 miles to Craster to check the woods for the reported Red breasted Flycatcher and an Icterine Warbler.

Birds were feeding in sheltered elders in the wood and I soon located 2 Blackcaps and a Garden Warbler, with 1 Chiffchaff, 4 Willow Warblers and 2 Pied Flycatchers. Then, a movement up in a hawthorn overhanging the path proved to be this nice lemony Icterine Warbler ( below). It showed well for a few minutes before flitting across the path into cover as the rain started. 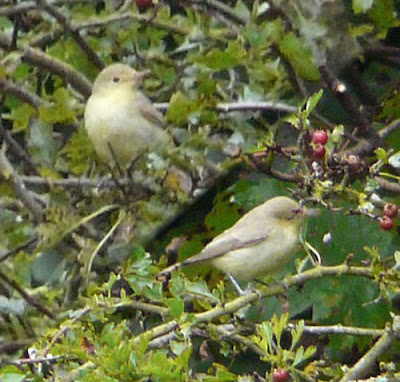 Above - Icterine Warbler, Craster. This was a typically lethargic bird, clambering around the twigs. Although the pics are poor you can see the overall lemony colour, the open, bland faced appearance, long peach coloured bill, long primaries and you can just make out the flash on the secondaries. The stout steel grey legs are obvious. Nice birds, Ickies...

No sign of the RB Flycatcher though...
Posted by Stewart at 4:22 pm

The green-eyed monster rears its ugly head once again. Some great updates there, Stewart.

Cheers both. There's a tale behind the geese. Locals saw 100 in the village a few weeks ago but I dipped so I was quite pleased with them today. I've only ever had one fly by Canada here in the past, though I did dip a fly by Richardsons Canada with Barnacles that later spent some time near Newbiggin in 2006...thats local patches for you...