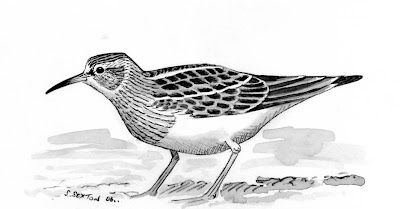 Above - A Pectoral Sandpiper from 2006...forgot to take my camera today.

Quicksilver says on his blog that Hanna was knocking at his window, well, at Cressswell Pond, hurricane Hanna left us a present, or two to be precise.

To go with the Buff breasted Sandpiper delivery from yesterday, today's offering was a pair of juvenile Pectoral Sandpipers, poddling about on the same weedy edge as the Buffy! On my post yesterday I mentioned that my last Buff breast was accomanied by two Pecs and today had a certain de'ja vue as I watched them together.

Both Pecs could be told apart as one was a much more rufous bird than the other and both were a size bigger than the Buff breasted Sandpiper. After checking some literature last night I think this bird is a juvenile female. According to Witherby et al male Buff breasts are bigger than females.

The pond held a great supporting cast of waders too, all feeding around the causeway area were -

plus loads of Lapwing, Golden Plover and Redshank.

A Sparrowhawk caused some consternation for a while, one of 6 seen today on my travels, and 3 Wheatears were flitting around.

Up at Boulmer tonight, 4 Whinchats, 2 Bar tailed Godwits and 2 Grey Plover were on Seaton Point and the mere held 4 Ruff and the Black tailed Godwit.
Posted by Stewart at 7:39 pm

"Witherby et al" Not heard that phrase for some time The Bible of it's day, Cresswell just gets better and better.
Brian

Wind direction interesting for the weekend BB - Northerly, Eastery, Westerly & Southerly depending on what website you look at.

Think I'll stick to the tried & tested 'stick my head out the window and find out for myself' approach to weather forecasting.

Brian - Yes I know its usually BWP these days. I still like the old books...

BB - Use the Met Office site and check the 'surface pressure charts' its the definitive forecast.