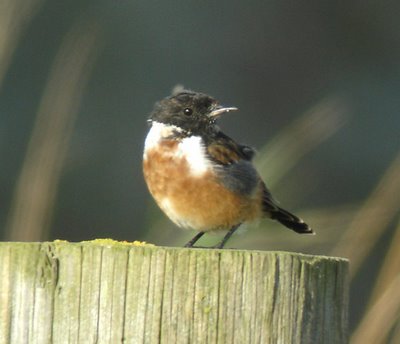 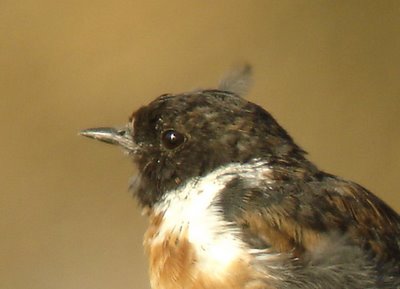 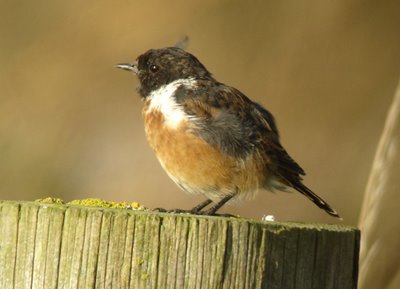 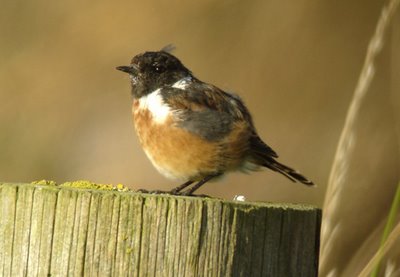 I tried a seawatch at 6.30am but the rain was too heavy even to view from the car window until 8.00am. The wind had swung around and was genarally variable from the SE-SW.
Of note were 3 Sooty Shearwaters distantly, 3 Manx Shearwaters, 3 Arctic Skuas, 1 Bonxie and 1 fw Mediterranean Gull all north. The Med Gull was different to yesterdays bird in that it had the usual ear covert type mask. At the Low Steads a good flock of Goldfinches numbered about 80 birds.

At 5.30pm I took another look towards Seaton Point. This Stonechat showed well on the main track and was a fully moulted bird of the year. There was little else of note other than 2 Whitethroats at the top of the golf course.

At 9.30am I took a trip to East Chevington to meet Nigel,Andy and everyone to see what was about. It was quite good here even though I dipped out on the two Spotted Redshanks on the south pool, I had 2 Greenshanks, 1 Wood Sandpiper, 7+ Ruff, 3 Black tailed Godwits, 1 Garganey, 7 Pintail and an immature male Marsh Harrier. The White Pelican made an appearance by flying NW over the south pool towards Felton, about 3 miles away, then back towards Cresswell.

This evening at 8pm a Barn Owl flew over the road at the south end of Longhoughton.
Posted by Stewart at 8:07 pm