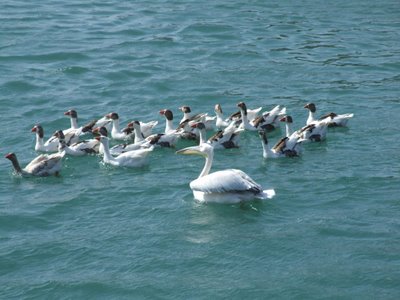 This picture was taken by a friend of Jimmy Steele in Turkey this year. Pelicans are tame over there too apparently. Still no answer from anyone as to why the bird that has toured Europe and is now in Northumberland is not a wild individual.

The weather today was very poor. It started raining at 10.15am and stopped at 6.30pm. The wind was calm early on then light NW in the evening.

On two walks around Boulmer ( North end and Seaton Point) with Bunty today I had - 1 fw Mediterranean Gull in quite unusual plumage. It had a fully white head and an almost black bill except from the tiniest pale patch at the base of the lower mandible. 16 Grey Plovers, 10 Bar tailed Godwits, 1 Bonxie N, 1 Arctic Skua N, 3 Yellow Wagtails, 1 Wheatear, 1 Willow Warbler and 40 Goldfinches feeding on seeding ragwort.

It may be worth a seawatch early tomorrow as there were loads of Kittiwakes and Gannets moving but the passage soon dried up after about 6.45pm. It may start again in the morning.