Seems a bit frivolous in light of the state of the world right now, but it's good to get out into the fresh air to clear an anxious mind.

For a change the wind had dropped right off giving us a lovely spring-like day. John wanted to check out new bins at 'In-Focus' who had an open day at Hauxley reserve so this seemed as good an opportunity as any to try for an elusive, but now resident, county tick.

The ever skulking, impossible Cetti's Warbler has been a reasonably new resident in Northumberland with records dotted all along the coast over the past decade, but the stronghold for them here are the large reedbeds of East Chevington. I have heard singing birds there several times over the years but none have shown. We even twitched one that had been at Low Newton for a period recently to no avail. In addition they can be found at Big Waters and occasionally in other spots too so it was always going to be a list addition, one to keep in the back pocket, so to speak.

A lot of people are happy with adding a bird to a list on call alone, something that I do for the local patch year list, but whenever its a county or UK first, I like to have a sight record, just for completeness.

The weather and timing were good for a chance of seeing these ginger, swamp dwellers and we had planned an early spring visit for a few years but just hadn't gotten around to it. There is always something else happening. Having seen Cetti's in various places further south and abroad, there was never any great push to get one up here, but is was always in the back of my mind.

We parked up at the south end of the North Pool and headed up to the South East corner hide, a good place for them. As we arrived at the track to the hide, the machine gun rattle of a male Cetti's could be heard in the tall reeds about 100 mtrs away. The sun shone and it was calm on this side of the reeds so hopefully one might appear.

After about 15 mins the song came again, much closer this time, in a wedge shaped island of reeds between two cut channels. Surely we had this one in the bag now, its right outside the hide and it has to venture into the open to move around. Then after a few minutes, a small brown bird flew like a bullet out of the reed base across the water and it was gone. Seen, but not quite what we had in mind.

As we waited, a Water Rail flew across the same channel, squealing as it did so. It then landed, did a funny jig around before vanishing into cover.

Then, Cetti's song came from behind the hide at our backs in some hawthorns.

We left the hide and moved along the track. Here some sparse small bushes grow from the long grass, and there at the far left was a movement. Through the bins it was calling, tail swinging Cettis Warbler. It looked a bit agitated, then it was soon joined by a second bird just as jittery as the first. They chased around tails waving and calling as they went. Then a third bird appeared that we took to be a female, as it remained quite calm and quiet as the other two ran around the bush for a while before breaking away into thicker cover.

Not bad, 4 sightings of at least 3 birds far exceeded our expectations, leaving my Northumberland List on a nice rounded 360 sp. 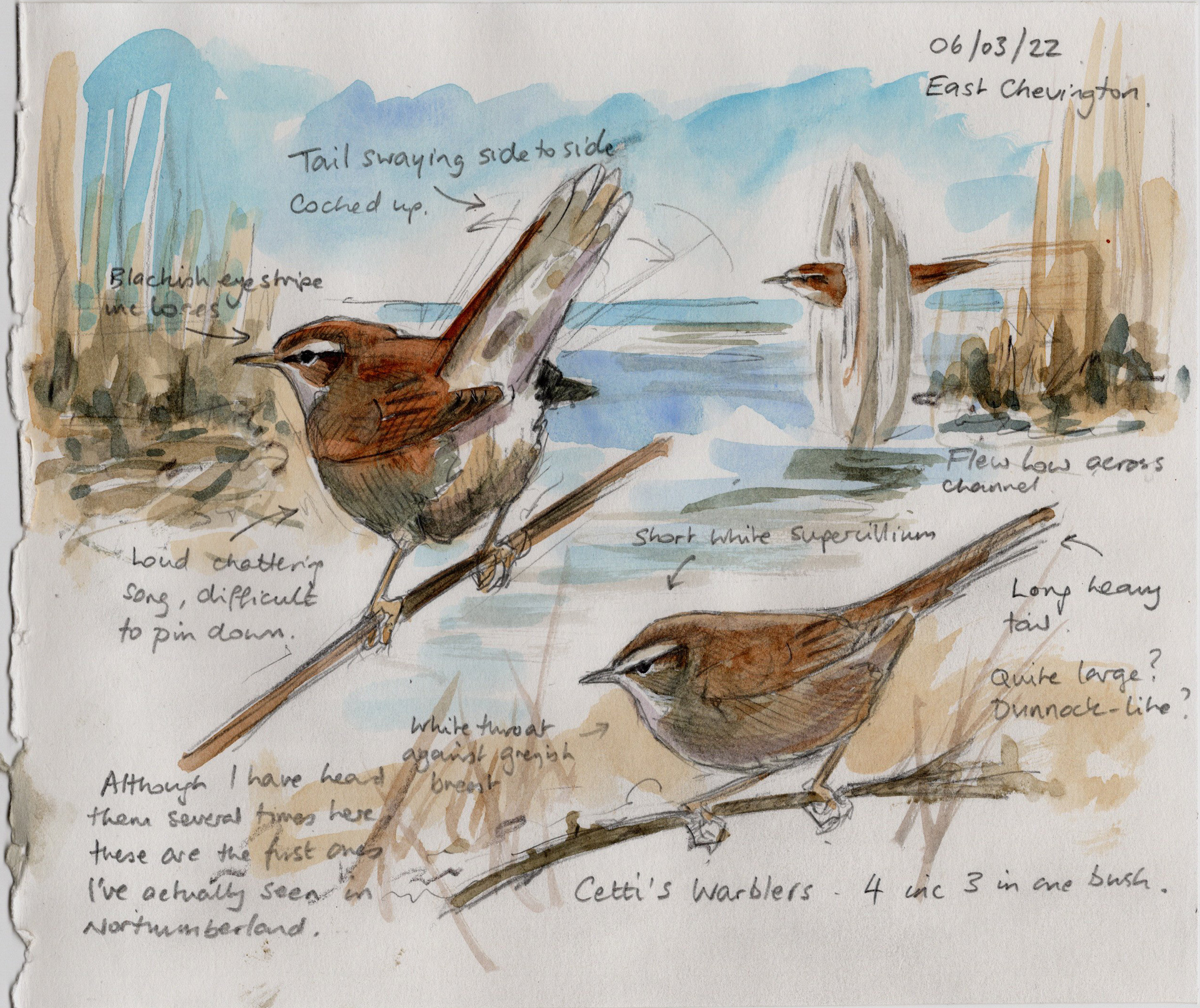 After that we headed up to Hauxley where Willow Tit and a few hundred Pink feet were the highlight ( after the superb Swarovski NL Pures of course).

Back home this afternoon in the warming sun, my fist Bumblebee and Peacock Butterfly of the year were both on the wing.

Well done. In all the years I've heard cetti's I've only seen maybe 2 or 3 briefly. Every time I'm on the Somerset Levels (and every month of the year) they're heard multiple times but they don't half keep out of the way. I once had one call only a few feet from me, I looked but never saw it. Seeing 3-4 marvellous.