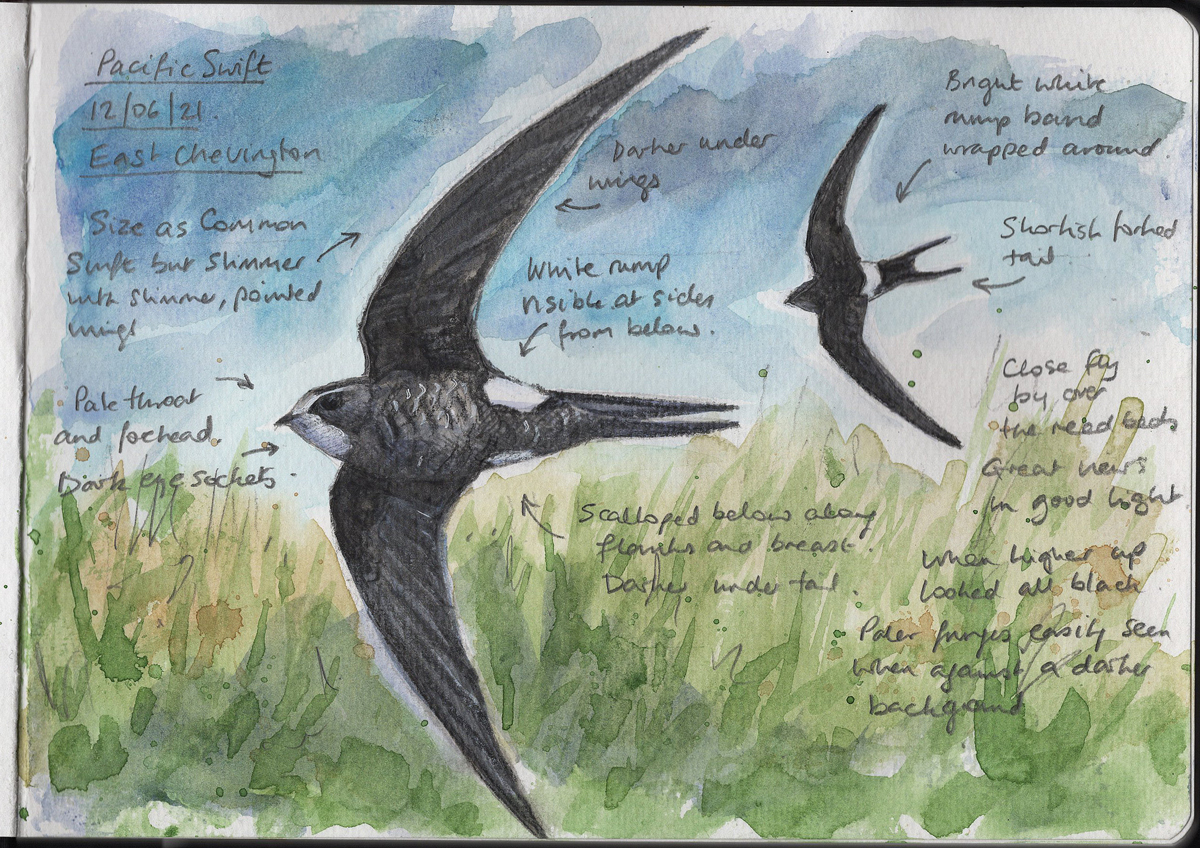 For some reason I couldn't sleep on Saturday so got up early to do the moth trap. Numbers still aren't up to usual standards but 97 moths of 36 species is enough to keep the interest going. After the catch was processed and photographs taken, it was time to up date our local moth page on FB.

It was while sat at the desk editing images that the Northumberland WhatsApp Rare Birds group came to life. A photo was uploaded, taken by Dave Elliott showing the departure of a Swift with a white rump low over water at East Chevington reserve. Even the rear-on image looked to me that it was not an abberant Common Swift. The bird was banking over showing a very slim pointed wing vertical to the water. Knowing the extreme transient nature of 'Apus' the image was taken at 7.30am and there was no further news by 9am. As the day warms, insects would rise on thermals and so will the swifts. It was currently cool and cloudy.

Then at around 9.30 information was released saying that the bird was still present, with no identification as yet.

With fixed plans for the afternoon, if I was going to have a look I better go now, so thats what happened. Arriving at a queue of cars parked along the lane side at Chev, the news was that it had not been seen for 20 minutes, however when I saw Tom Cadwallender he told me the bird was still here but away up at the far north of the reserve near Druridge Bay Country Park.

The car was given a 10 point turn and I headed up to the park, parking the car right beside the north entrance to the reserve coast track. As I made my way south, three birders were stopped on the track around 100 mtrs away looking towards the lake. I assumed they were watching the bird, but no sooner had I built my hopes up, they all just carried on wandering down to the west facing hide.

By now I was almost at their spot. Looking toward the hide, a birder was watching through his bins but he was facing directly north, an area above some trees to my right, so I stopped and scanned. With the naked eye, nothing. The bird could be more distant so a scan with the bins was similarly empty, then all of a sudden one bird came into my field of view and it had a huge wrap around white rump! It came very close giving excellent views against the trees. Immediately it could be seen not to be a Common Swift, its shape was all wrong with a narrow waist and slim more pointed wings it scythed around with Common Swifts  and to me, was all day long a Pacific Swift!

After a couple of minutes it flew back down to the water so I headed to the hide where around 20 birders stood around outside. Someone asked 'Well, what is it?'  'Its a Pacific isnt it!' was my excited response only to be doused by a 'Is it though?' by very experienced birders. White-rumped Swift was not eliminated. This was a bird I have no experience of but I have seen Pacific Swift in China. If only we had a field guide because given these brilliant views, there isn't really a danger of confusion. We commented on the slimmer structural build, the pale scalloped under parts and the size. Some felt it should be bigger than Common Swift, but guide measurements show them to be the same.

By now it was a big twitch with lots of people taking photographs so no doubt its identification would be confirmed soon.

I left after an hour, not believing what had just happened. After last weeks stint, now this! Northumberland is getting some great birds again this year.

By the time I was home, the information services were posting images of the now identified Pacific Swift and everyone was getting good views. I could get on with today's plans quite happy...

well done! youve had some great birds up there recently, which all seemed to turn up after i left....... went for the swift left fairburn ings at 10 it had gone by the time i was crossing the tyne,but carried on hoping nothing
so basically i went birding and did a big shop in morpeth then went home for a bbq with my friends

but you make your own choices still good day

Seth - Don't need the parakeet but the others will do. Of the more regular rare species a Marsh Sand, any Sandplover, Alpine Swift! I could do with for the county.

Darrell - Unlucky Darrell, it was worth a shot...

Andrew - Cheers, I did enjoy it. Shame about the River Warbler, the pictures Ive seen seem to show the bird performing well...