Tuesday I came back with the dog from her lunchtime walk to find that the latest British Birds 'journal' was lying in the porch. We all get a bit of a buzz when some reading material arrives I'm sure, so with a little pick-me-up in the mid day, I eagerly opened it to see what lay instore.

Before I go on, you might have a look at Gavin Haig's take on it here , and I will say that this is my own, self indulgent view on things, mainly because it is my money that gets it delivered to the door.

I opened the packet keen to see what had been going on in the world of UK birds over the past month but only 10 minutes later, Vol 114 June 2021 was resigned to the book shelf where it will just gather dust. 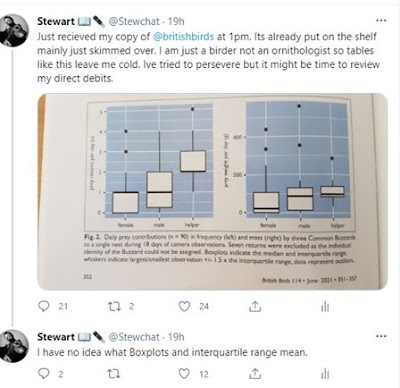 By close of play I had received a wide range of feedback, but a lot seemed to miss my point, such is the nature of Twitter. Whilst I did throw out a Boxplot graph as the catalyst for my whinge, my disappointment in BB stretches beyond that. Several well educated academics gave me advice on what this image of jargon means, and yes I could have read the whole article in detail and probably understood the results. I might live like a yokel, but I'm not quite Worzel Gummidge yet. The thing is, I don't want to read it. It is visually and mentally mind numbing. To me.  The article was about 3 Buzzards attending a nest with young, a pair and a helper. Now I am interested in that, but I could have been told that in a sentence or a paragraph without the use of phrases like 'Boxplots indicate the median and interquartile....zzzz' sorry I nodded off there.

For non subscribers, the rest of the journal discusses Nesting Spoonbills in Norfolk (15 pages, 8 tables and graphs with hatching and fledging times, incubation periods etc), Breeding Range Expansion of Caspian Gulls (10 pages), Recovering the Eurasian Curlew in the UK and Ireland since 2015 (10 pages), The Value of Webcams in Monitoring nesting Peregrines ( 4 pages). All very laudable and important documentation I agree, but I'm no ecologist or ornithologist. I'm just a birder.

I should probably add now what I would like to see in BB?

Despite what I have just written, I think those articles should have a place. This is as well as, rather than instead of, except with more balance. BB is becoming 'high brow' for no good reason.

There should be a lot more about what today's birders are discussing in the field, in the obs common room, in the hide, at the bird club meeting and less of what passes as a post grad thesis .

Gossip. What do you talk about with other birders? Covid not withstanding, a lot of hide gossip is great. It can be hilarious, enlightening, irreverent. It covers everything from the local cafe on the coast, to stringers, to remember when he did that and on and on. Boxplots have NEVER been discussed by birders in the field.

Frontiers. Now we have lost Martin Garner who will pick up his baton.

I don't want to see another Green, Wood and Common Sand separation article, but maybe if a new field character or idea is considered we could be updated.

It should bring back birding and reduce things like -

'Decadal means (with standard error bars)for a) the number of sites and b) the minimum number of confirmed breeding pairs and c) the maximum number of breeding pairs in six regions of Britain ( excluding Worcestershire) from the 1970s to the 2010s. The mean is calculated based on the number of years that data were collected within each decade; for example, in decades where three years lacked data, the mean was calculated for the seven years with data.'

...until the next time you hear some one discussing 'decadals' in a hide at Cley or East Chevington.

After all that, its probably not what British Birds is for, but I wish we had a magazine or journal if you like for birders rather than ornithologists. Not the level of 'Bird Watching' that gives woodpecker id articles and places to find bluebells, but a more mature, experienced take on things.

On that note, it shows that its not me who doesn't want British Birds.

Its seems that British Birds doesn't want me.

I gave up BB some time ago Stewart. It does, at times, appear more like the BTO journals, where this scientific in-depth study is what is to be expected. The particular BB issue you have highlighted does seem - to me at least - exceedingly dry.

Interesting thoughts. Agree with some of your suggestions on topics for a future BB, though finding some of their longer articles quite interesting e.g. breeding spoonbills, marsh warblers etc & relevant to birding, methinks. Wasn't as interested in the Buzzard article you refer to. Lots of birders go out and collect data or take part in surveys, and submit their data, so seeing some results and articles about that is good. Personally I'd switch off if there were lots of photography or (most) 'gossip' articles. Each to their own!

Comparing decades (decadals)? We do that - often reminded how much better it used to be...

Have you tried British Wildlife?

Since your tweet the other day, what has surprised me most is the number of birders who've commented that they no longer take BB. And I suspect that many who still do, do so grudgingly. What a crying shame...

I've given it another crack after an 8-year lay-off. Digital only. I'll try it for a year, and hopefully remember to report back in 12 months time.

Well said Stewart. I agree whole heartedly with your views. After all it’s primarily borders that buy the thing. I haven’t subscribed for years.

I stopped subscribing to all bird magazines quite a while back. For one thing, most of what I was reading was copied from other magazines/books; a lot of stuff was printing 'news' that had been on the internet for days if not weeks. A lot of the ID articles were on species that were far too difficult for me to ID, even if I saw them, which in many cases was unlikely. Nowadays most of my birding is done locally; and I've found that my interests have gradually expanded beyond birds to butterflies, moths, Odonata, hoverflies etc. In short, I don't miss the mags.

Hi all,
Steve -Yes exactly, the BTO jouranls are for science BB is for Birders. Or should be.

Amy - Yes I get British Wildlife, it is more readable with more in it of varied nature than BB I find. But it is still very dry in its approach. Its like you cant enjoy yourself, this is science! Decadals? Why use that phrase if it means decades? Is it just to be clever or to totally alienate the proletariat?

Ric - It is a shame that the resource cant be more inclusive and readable.

Anon - That is always going to be a problem with news. It can never keep up with online constant streaming 24/7. I dont hold that against them, as it cant be helped.

Thanks for all the points of view folks... Stewart