Met up with John on a fine, bright evening at Boulmer.

The car par was three quarters full and many visitors were still on the shore. The tide was high, leaving little room for waders so we sat on the bench and pointed our scopes seaward just to see what was passing.

First of all a nice close fly by from 8 Common Scoter heading North followed by an Arctic Tern. The local breeders were out in force with many Auks, Terns and Kittiwakes feeding further out. The tide was just about to turn...

As we chatted and drank tea, I glanced north towards the village and saw that all the gulls were up over the beach as a couple walked along the strand line. Just over their head was a large dark bird hanging in the breeze. At first I thought is that an Arctic Skua, then it banked around to reveal that it was much bigger, a huge Bonxie , right over the beach! As if that isnt unusual enough, as soon as the people passed by, it dropped out of the sky to land in the washed up kelp right up against the marram grass.

We had great scope views, but hadn't I forgotten to bring my camera. Typical. So I watched the gear at the seat while John stalked down the beach, like a ninja Navajo, melting into the shadows until he was close enough for a shot. Unfortunately another couple and their dachshund had other ideas and marched right up to the bird. They were almost standing on it before it flew, off and away around the corner never to be seen again. 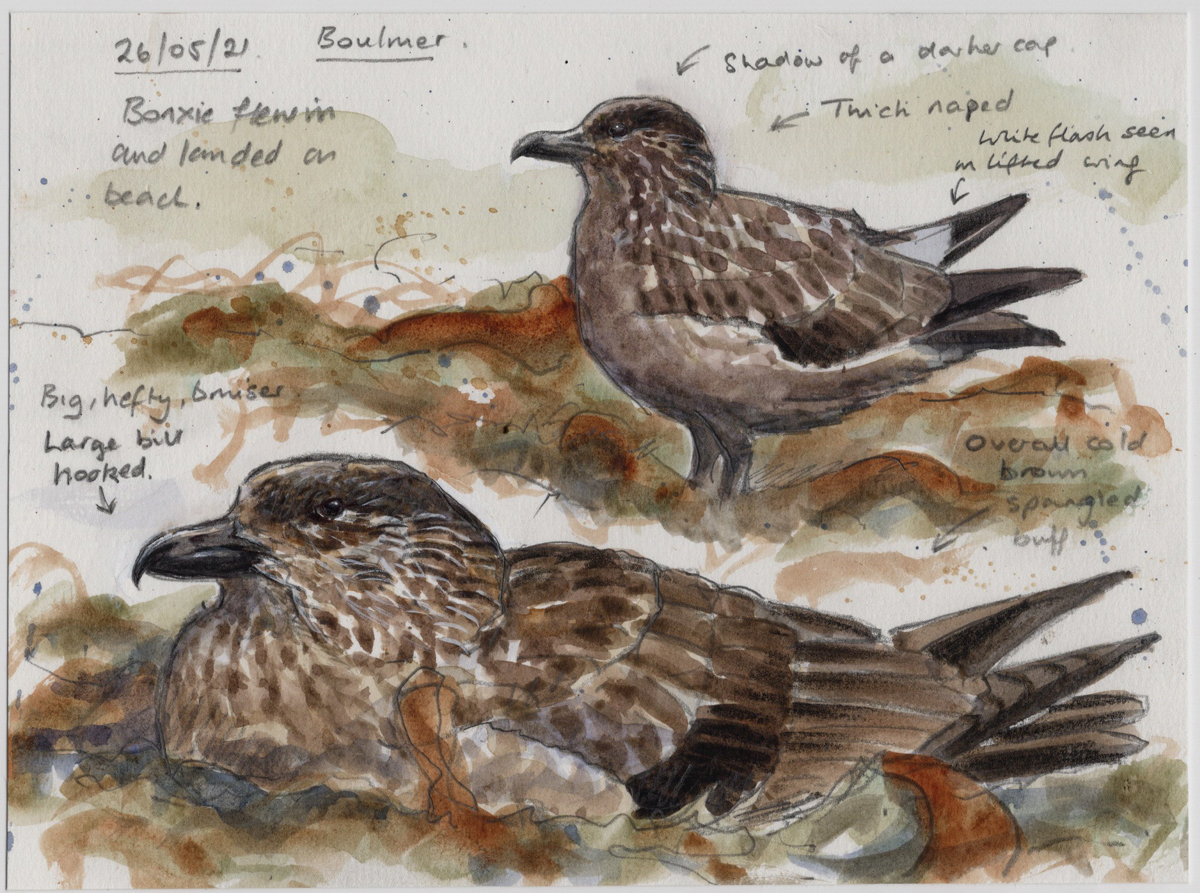 After the skua had cleared off so did most of the public, thank goodness, and the tide was on its way out. Waders were flighting in to feed with 70+ Ringed Plover, 70+ Sanderling, 20+ Dunlin, 20+ Turnstone, ( no Redshanks always seems odd) and a single summer plumaged Knot. While 8 Shelducks rested on newly exposed rocks, the village pair were out with 11 ducklings, just Bonxie fun sized.
Further along, a pair of Stonechats with 2 juvs and the male Greenland Wheatear was still on the beach.
Not a bad couple of hours on an evening...