Cast your mind back all of three weeks to the 1st of November, Here, and that odd looking Wagtail on the beach at Boulmer. Today the sighting has really taken off.

Mark Eaton posted some images from yesterday that Ross Ahmed picked up on and contacted Per Alstrom ( stay with me, I'm almost there) who replied back to say the bird looked very like a Masked Wagtail x White Wagtail Hybrid. Masked is from Iran and Kazakhstan and such places.

Needing no further encouragement, I went back on the internet trawling all over for information and images that might confirm our bird. The more I looked the more I sank in a mire of confusion and unknown info.

Some images on a Kazakh website looked promising and one from Dubai posted by Ross looked even better, but none were exactly like our bird. Just similar.

Then I came across a lengthy but readable Dutch paper on the seperation and identification of Pied Wagtail and White Wagtail. It contained some encouraging comments - 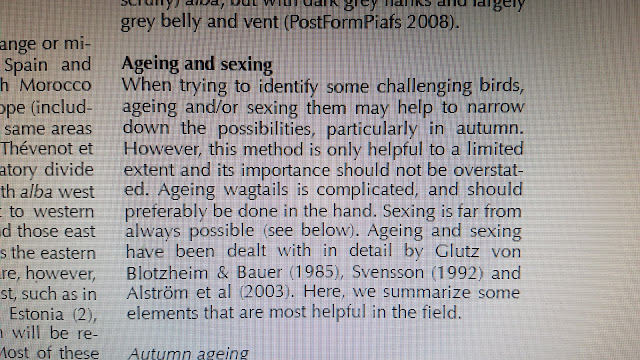 Wow. If we cant separate European birds that arrive here in good numbers what chance a Middle Eastern vagrant unless it was a field guide example. 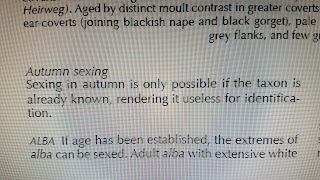 And on it goes... these birds are really difficult.

Looking at this image above our bird is score 2. 60% chance it is a Pied Wagtail.Even giving it the benefit and scoring 1, It doesn't look like its come from very far really.

Then we get to upper tail colour. In my previous blog post at the time the dark upper tail made it a Pied Wagtail to me, then I was advised that Masked Wagtail also have dark uppertail coverts. Returning to the paper, there are so many shades of grey rump a kodak grey colour gradation is required to log them all.

The Dutch paper goes on -

For some intermediate birds, we do not really know what such birds are; they were collected far outside the normal range of yarrellii. They might be the result of interbreeding between alba and another taxon; in Asia, interbreeding has been recorded with personata, ocularis and baicalensis (Alström et al 2003) (Per Alstrom again) However, these three taxa show grey upperparts and rump (without black) in all plumages. In addition, these skins showed white neck sides like alba, while the combination alba x personata (the most likely type to occur in Iran, and sometimes referred to as ‘persica’) could perhaps be expected to show traces of the dark neck-sides of the latter taxon. Cramp (1988) also reports occasional black suffusion on mantle, scapulars and sides of breast in male ‘alba-like birds’, not only from western but also central Europe far from the breeding range of yarrellii.

So, here we are back to Masked x White Hybrids again, but no one knows what they really are.

When things get this complicated I wonder about making it simpler. If these birds readily hybridise, what would a Pied x White look like? Its infinitely more likely a proposition.

Until I found a page from our now gone great birder, Martin Garner -

Have a look. He and many others watched a bird on Helgoland in 2007 that looks like ours. Like me he considered subpersonata. After some thinking and discussion with top birders like Martin Cade and Gary Woodburn  et al they also provided images like the Boulmer bird, all taken in the UK.

What do these observers think?

They think its a PIED WAGTAIL! Back to my original result.

Oh dear, I think there are some individual creatures out there that will always have us flummoxed and you know, not all oddities are rare birds. Probably best to leave it as 'alba' wagtail sp... or even sub sp... 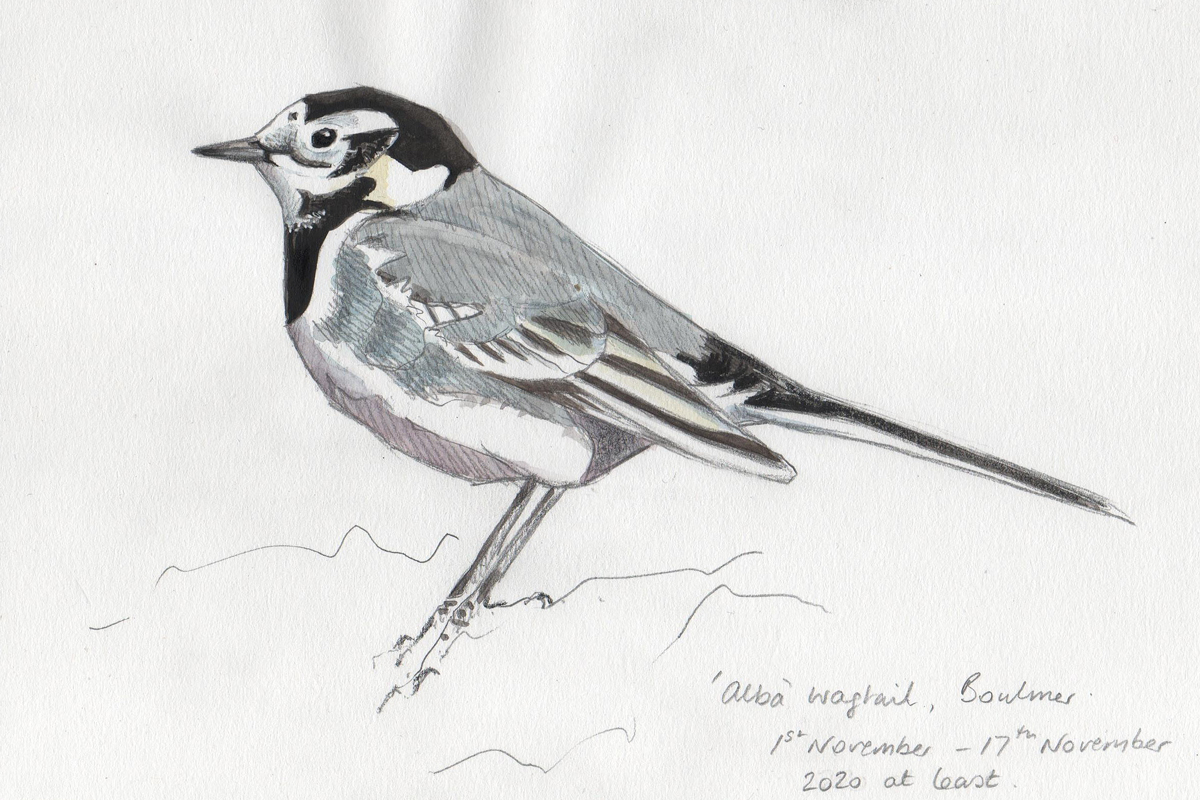