The Autumn that keeps giving...

I ended last Monday's post wondering if this week with its associated weather forecast would bring anything of interest. Well it did, and here is a longer than usual post covering my three days leave and this weekend. Please bear with me...

All over social media birders hopes were high that this week would bring an avalanche of good birds to the East coast. To me, the surface pressure charts didn't seem quite the classic being mooted but it still held promise. The wind has been largely in the North and East, but there was no long corridor of isobars across to the orient.

Today was breezy with a NE3-4 and quite mild. This changed at around mid afternoon when it became cold and grey with some heavy rain squalls moving through. To keep an eye on the prospects, I spent the day seawatching. Two sessions from 08.45 - 11.00 and 2pm - 4pm. It was slow but steady.

Little Auk 1 N First of the autumn, typically very close in just over the breakers.

Later in the afternoon, news came out from Holy Island of lots of migrants, including several rare and scarce birds. Red flanked Bluetail, Dusky Warbler, Barred Warbler and Little Bunting highlighted the finds until a distantly observed small 'red-backed' type Shrike was found near the Chare Ends. It had my alarm bells ringing straight away with its dark chestnut upper parts and disproportionately long, stuck-on, tail.

After yesterdays poor weather today was fine and clear with a light N3 Breeze.

A promising sign when I had Peggy out for her early walk, when we flushed 2 Woodcock of the coast path.

I met John up on Holy Island at 0830 to check out the shrike. It was now being put out as a first winter Brown Shrike, a first for Northumberland and a UK lifer for me and John. Before we got across the causeway, the bird had flown off high west and was missing, being looked for.

We joined in the hunt wandering over the the Excavations but birds were thin on the ground. There were no or very few common visitors such as thrushes etc. A Snow Bunting called as it circled around over head and a nicely marked Merlin watched us from the top of a hawthorn in the dunes. We were about to give up, when the message came through, Brown Shrike, back on hawthorns near its original spot. Within 10 minutes were were on the bird. We kept our distance, from it and each other but viewing through the scope was excellent in good early light. I have seen many Brown Shrikes in China and this bird gave no cause for concern to me, a classic mahogany coloured, bull headed Brown Shrike with a tail like a Long-tailed Tit!

Unfortunately I needed off the island before the tide for dog duties, leaving no time to catch up with a Bluetail or Dusky Warbler. 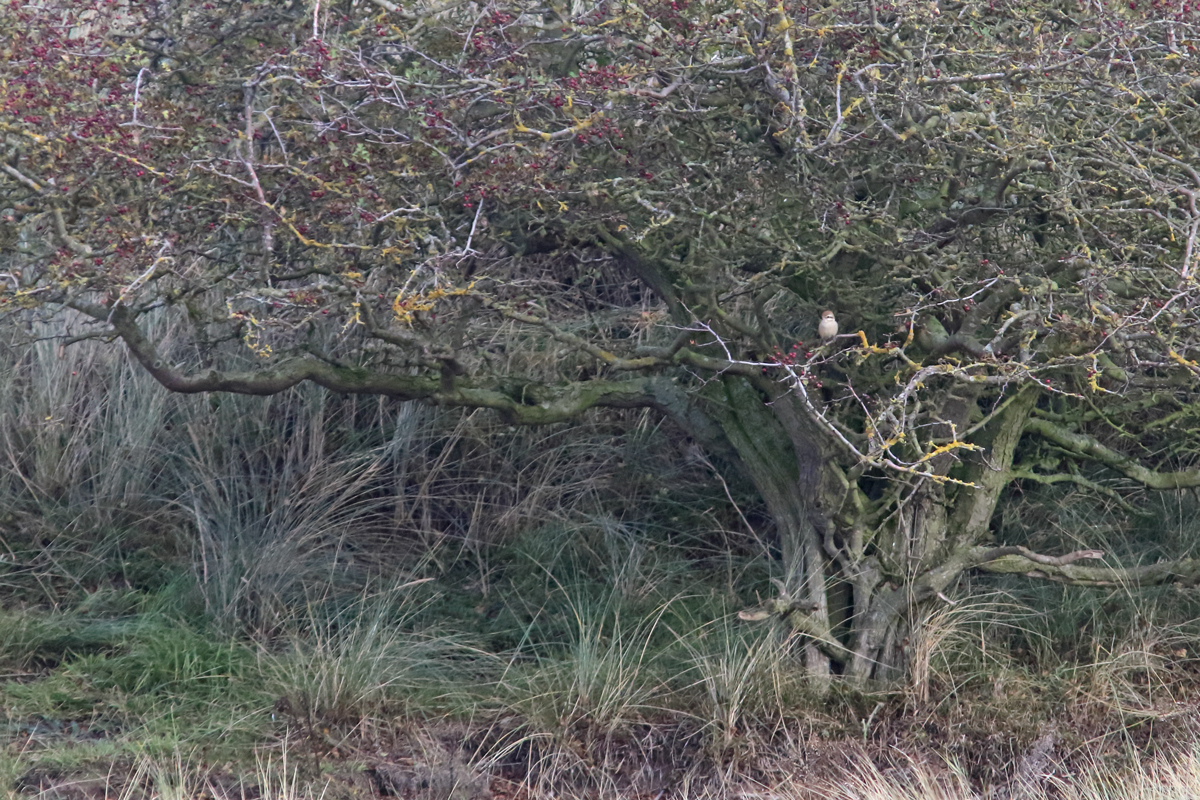 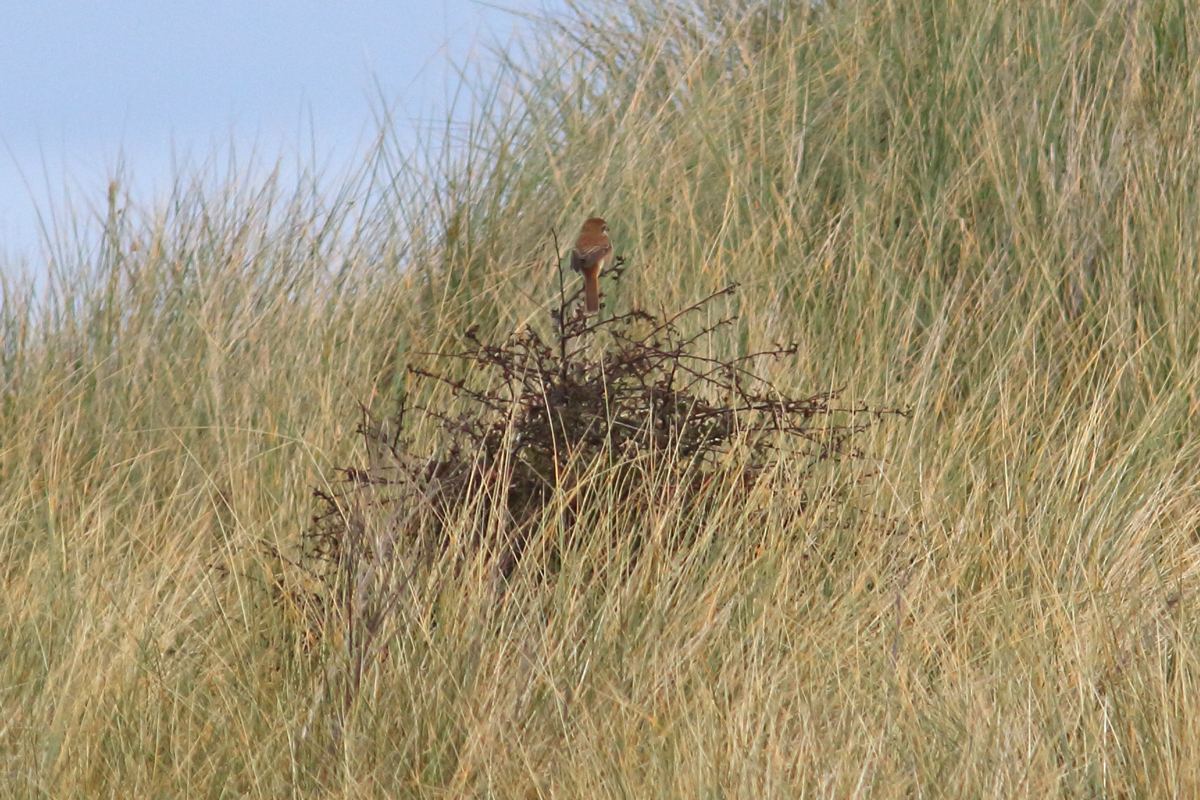 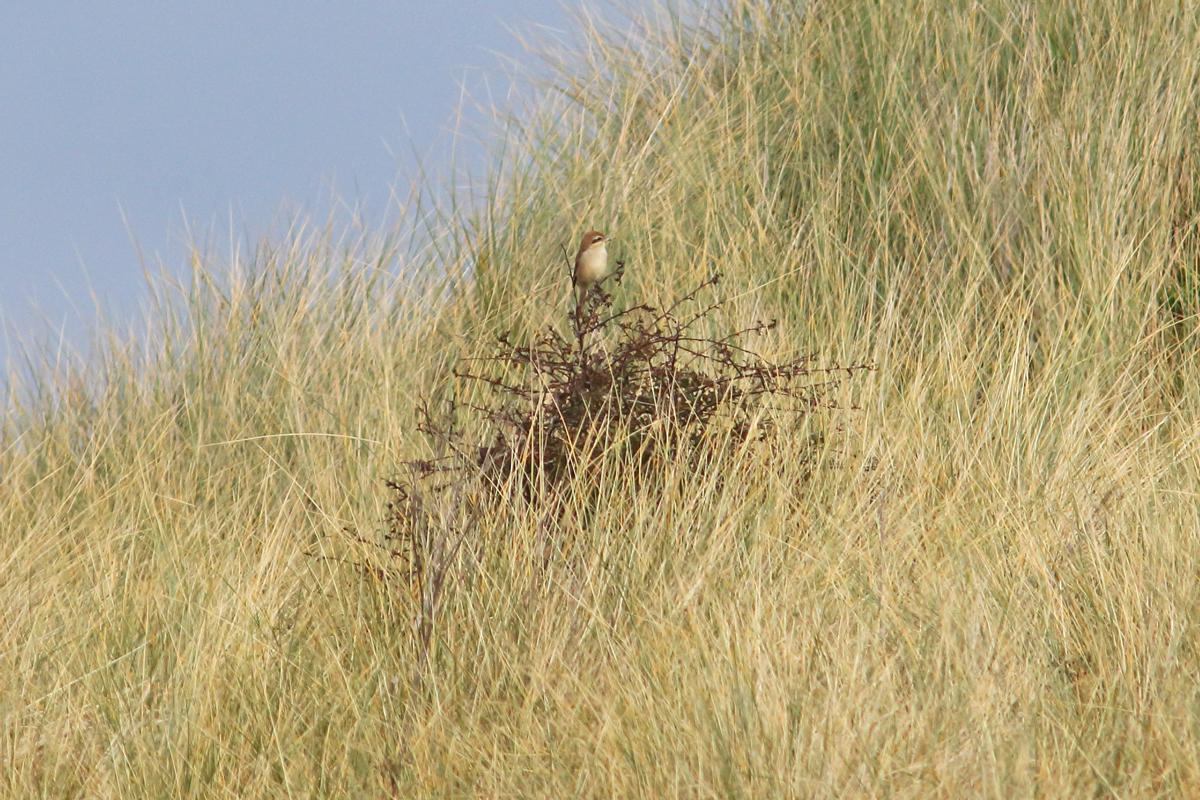 Met up with John and Boulmer to see if we could get in on the rarity action closer to home. We spent the morning covering the north part of the headland on a calm cool morning not seeing very much.

1 Chiffchaff, 9+ Crossbills N, 6+ Twite with 100+ Linnets, 10 Whooper Swans S, 2000 Pinkfeet S, 1000+ Golden Plover, 1 Peregrine, 2 Grey Partridge and the usual common species. All to be enjoyed but with this weather hype, a bit disappointing. Still, we worked for the birds we had and after all, time in the field equals good birds found. Eventually...

Last night I messaged John saying we should really go back to Holy Island as we must be the only Northumberland birders who haven't seen a Red flanked Bluetail this week. Somewhere between 2 and 5 individuals have been on the island along with the shrike and many lesser rarities, it would make for a good morning out. After an hour thinking, I sent him another message saying I think we should just go to Boulmer to find our own Bluetail...you never know. Its always a gamble to risk missing some excellent birding for little reward.

We were on site for first light and it was very quickly apparent that today was quiet. Still, there had to be a good bird somewhere around, it was finding it that was the problem. Along the shore were 2 Red throated Divers, 1 Red breasted Merganser, 12+ Sanderling, 8+ Bar tailed Godwit and 1 Purple Sandpiper with hundreds of mixed gulls and smaller waders such as Dunlin and Turnstone.

Up at the caravan site we had Blackbirds dropping in with 30+ birds and a scattering of Song Thrush and Redwing. Skylarks were moving south, we had over a hundred in the morning, plus 7+ Siskin and several very high Redpolls.

It was time for our breakfast back at the car along at the south end layby, near the top of the golfcourse.

We had scoffed a box of veggie sausage rolls, a scone each and a chocolate brownie and were contemplating what to do next over a second cup of tea when John commented, whats that?

He was looking up at the sycamore beside the car. I raised the bins and could see it was a Wheatear. It seemed quite small and it was very late now but being back lit against the sky wasn't going to solve it.

I walked back along the road to get a better light on the bird. Luckily it stayed put. On looking at it, on the top of the tall tree, I could see it looked pale and asked John to bring his camera along. He took some record shots. The bird still didn't move so I went back along the verge to get my own camera.

By the time I got it out and turned on, I pointed up at the branches and locked on to a ... male Stonechat? Looking back at John, he was now facing away from me bent,  stalking along the fence with his camera. The bird had flown along and on to the fence line where it looked much better at eye level. We were over the moon to realise it was a female Desert Wheatear!  The increasing traffic along the road flushed the wheatear and we lost it. For the next hour we hunted along the shore and across field but it seemed to have moved on. Luckily reinforcements arrived and Mark Eaton picked the bird up half way over the ploughed filed on the opposite side of the road.

While we discussed it, a nice Siberian Chiffchaff called its light piping noe in the bushes, eventually showing quite well.

Desert Wheatear. What a bird to find on a quiet morning on the patch. A first for Boulmer too. I am pleased we didn't follow the masses to Holy Island after all because finding your own rare bird can't be beaten. I've just remembered too, there is a super hyperzonky mega rarity 300 miles away in Norfolk. What's it called again? 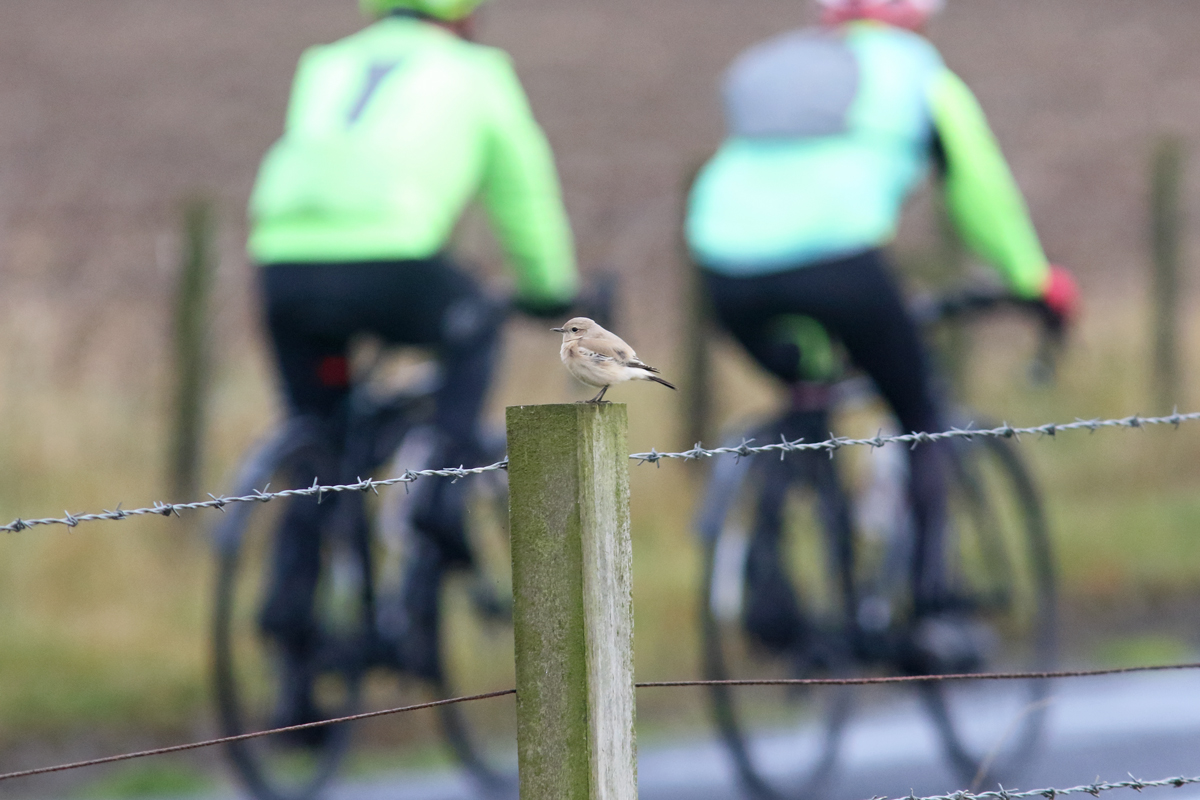 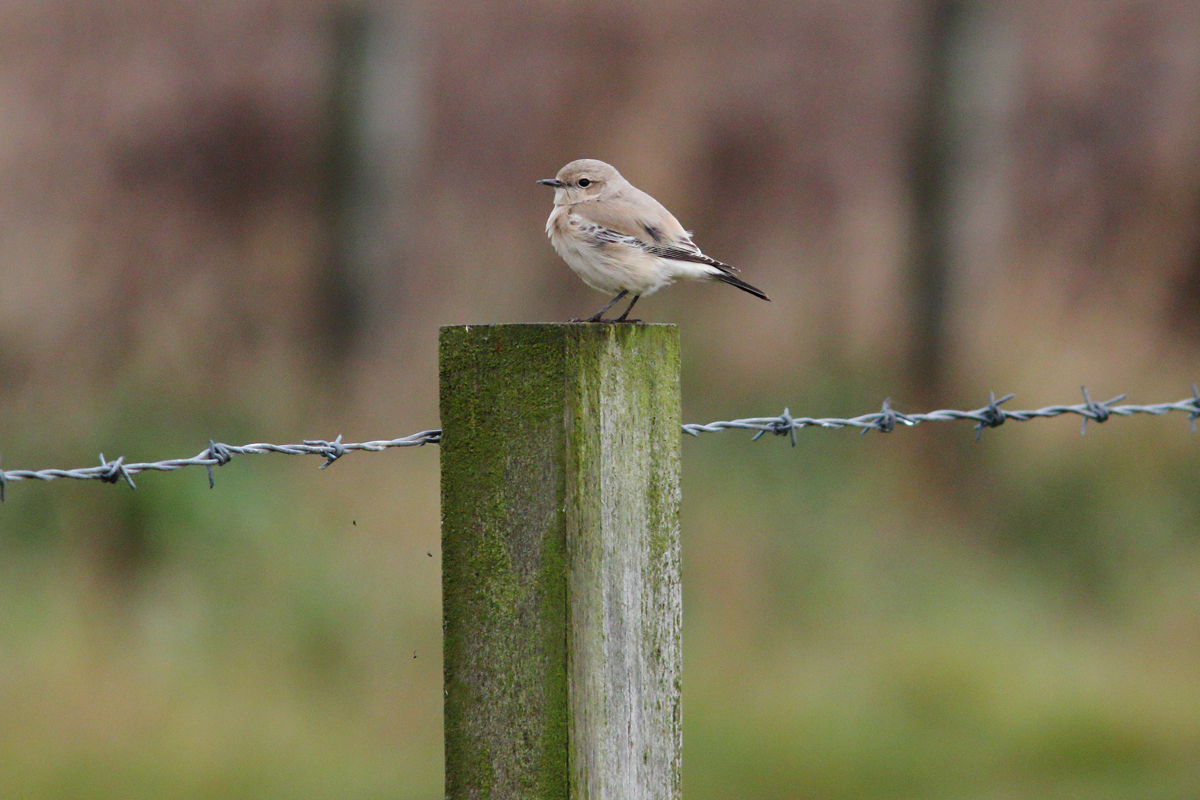 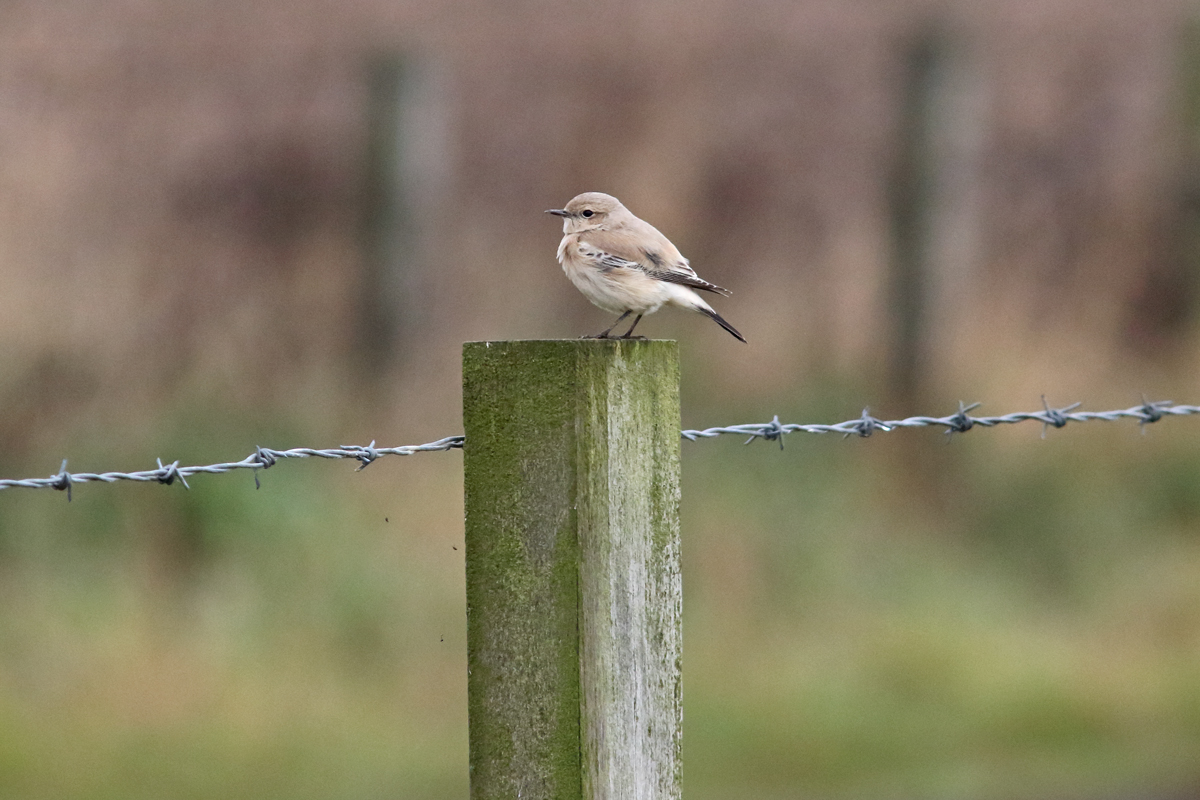 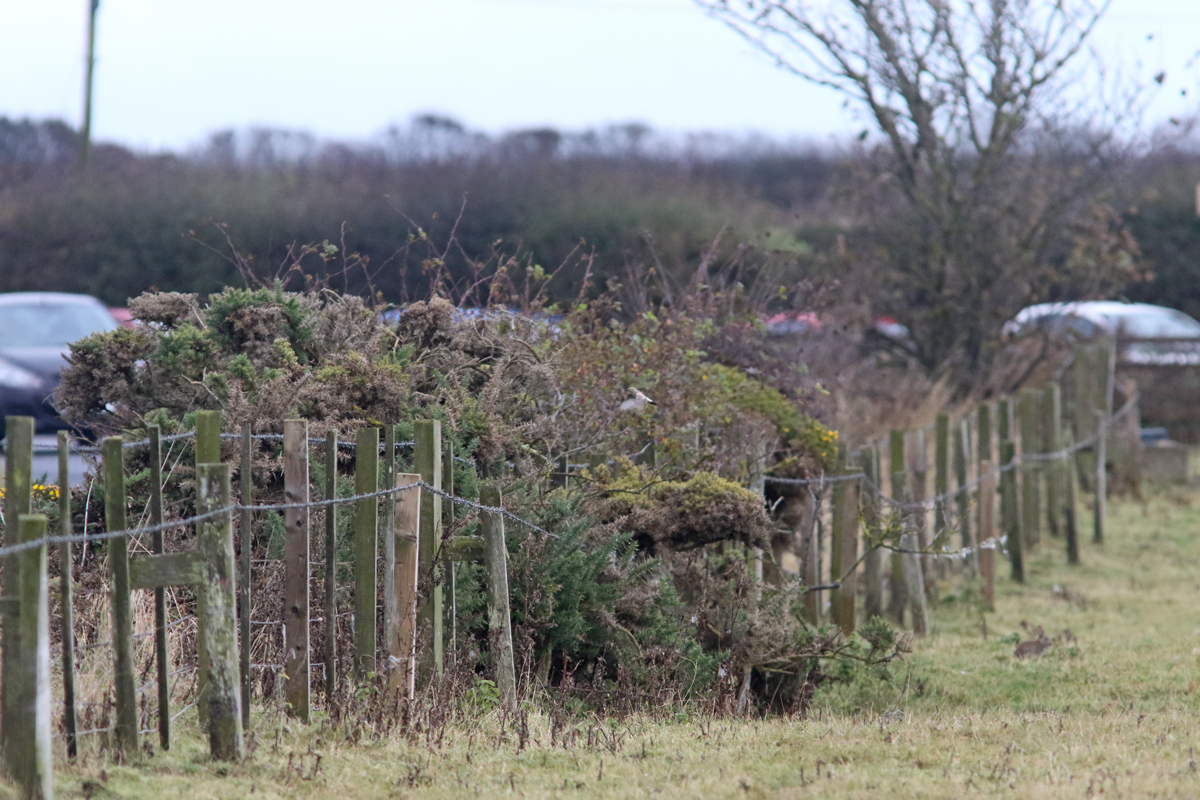 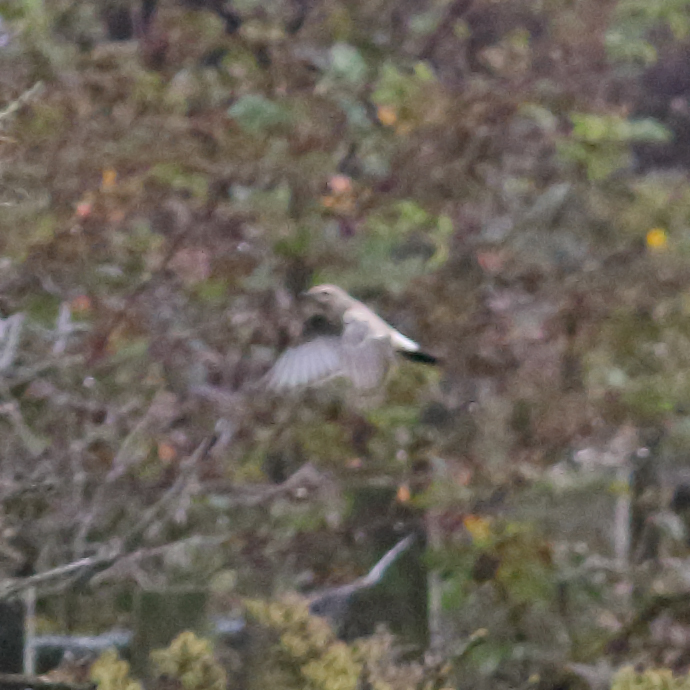 Not envious at all!!!

Always nice to find your own rarity!

Gav - yes, I wouldnt swap the wheatear for it...

I really must plan to come to Northumberland next autumn! Little auk would be top of the list anything else would be a bonus!!

Derek - Little Auk is regular here from late October through til late November, peak time being around mid November but they are totally weather related. A good fast moving storm from the Atlantic over the top of Scotland giving us northerlies and you wont be able to count quick enough...