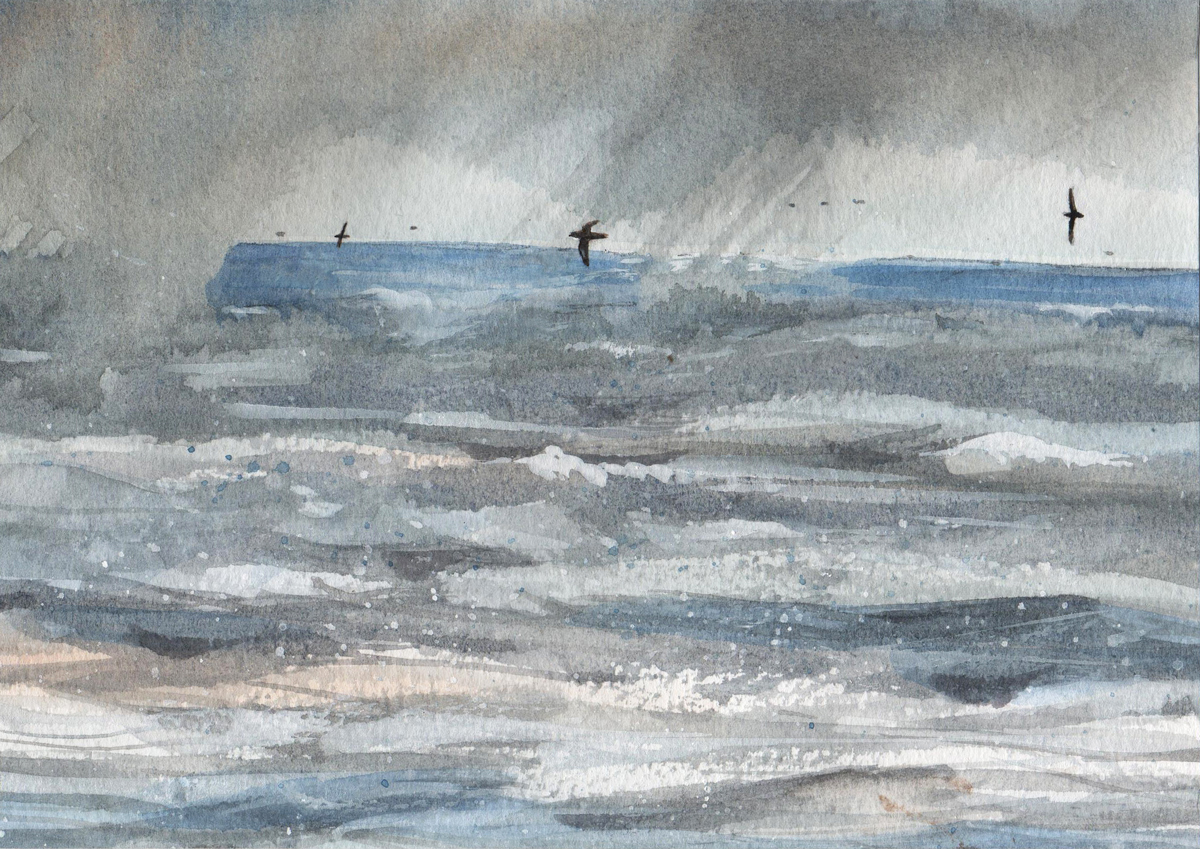 The wind swung North West on Thursday evening so I popped down to Craster in the car to check it out. It was raining heavily but I wanted to see if any birds were moving. As I've said here before, we are often spoiled by having a lot of seabirds to look at, so much so that we routinely ignore Gannets, Kittiwakes, Fulmars and Auks in the hope that 'proper' seabirds are out there.

As I scanned the grey lumpy sea, it was like the moon, but liquid. There were no birds. I don't mean no shearwaters and skuas, I mean NO birds at all. Not a Gannet or Fulmar in sight. It is as difficult NOT seeing Gannets at this time of year as it is seeing a Sabine's Gull here. It happens, but rarely. I have no idea where the birds were but I planned to try again at first light on Friday. Experience tells me, they won't be gone for long.

I was out on Cullernose Point at 7am and could instantly see a few Gannets moving through. I sat down and set up the scope. On looking at about three quarters range I was confused. The sea was alive with birds. Auks and Gannets in lines, but also dark looking shearwaters. The problem with early seawatches on the east coast is that if there is a sun rise instead of thick cloud the birds are just silhouettes on blinding water. The sun wasnt bright this morning but the sky was glowing making a lot of loose shadowy bird images. I could see dozens of stiff winged tubenoses but until I got my eye in some looked like Manx Shearwaters, some like Fulmars but most looked like Sooty Shearwaters. In their dozens.

Were my eyes deceiving me here? I took a breath and whilst being buffeted on the left side by a strong northerly, I could see these really were all Sooty Shearwaters. Then I had company, Mark Eaton arrived with Sam the Retriever. I suggested he had a look out there at all the Sooties. I had counted 40+ in only a few minutes. They were never off show. A North -South scan with the scope went, 1, 2, 3, 4-5, 6-7-8, 9, 10... it was never ending. I had not seen a Sooty movement like this since 2002 when we had 1700 North in a day at Newbiggin. If only we could sit all day, that county record would surely fall but I only had til 09.30 so I got counting.

By the time I had to leave, I had counted 463 Sooties N. Mark stayed on for a while upping the total to over 750.

The thing is, there was little else of note moving through the turmoil. I had 9 Manx Shearwaters, 19 Sandwich Terns, 2 Arctic Skuas, 1 juv Pomarine Skua, 3 Bonxies, 3 Red throated Divers, 2 Pale bellied Brents and a likely Long tailed Skua that was a bit too far off.

After work I popped back down for an hour seeing only 12 Sooties and by now the sea was too rough with birds just being blasted south.

The interesting thing about this movement was that at the southern Northumberland seawatching stations like Seaton Sluice and Newbiggin, Sooties scarcely made it into double figures? The mysteries of birds eh?

Sooty. Sweep. See what you did there...
Fantastic spell of birding Stewart, we live for times like these.

On my patch, the whole year nearly comes down to about 4 spells of seawatching! Love it...