The danger of seawatching...

Since the weekend in Northumberland we have been lucky enough to get a short spell of East and North Easterly winds. In the early hours of Sunday morning the wind here swung from solid west, to North. This came off a low moving straight across the middle of the UK, thus, the wind soon turned to the East on Monday then back North East today, increasing in the afternoon.

Despite the overnight rain, passerine migrants were in short supply probably due to the blocking low over Scandinavia, but at this time of year anything can happen.

On Sunday John and myself began by seawatching off my local headland, Cullernose Point ( see map in right hand side bar). This small whin sill headland is only 1km from my house, so its a good loocal patch place to add to my list.

From the start it was clear that we were not witnessing much pelagic passage. There were no Gannets for a start, well a few but I see more here on a sunny June day. A few Red throated Divers were moving plus single Bonxie and Manxie, 2 Arctic Skuas, a Puffin and a few other miscellaneous. Boredom set in.

It was now that we got our eye on a tern in the Howick Bay immediately to the south of us. It was quite close, certainly good views in the scope as it flew and hung in the wind above the rock edges and newly exposed kelp beds at low tide.

Before I go on, I must add that in Northumberland we see terns every day at the coast from May til October. They are bread and butter stuff and is something we scarcely give a second glance to after we have added one for the year. This lone tern immediately looked odd to both of us. I said it looked like a Gull-billed. Surely not, it will be a Sandwich after all you dont get Gull-billeds at sea? We stared hard. And stared again. In good scope views, this bird looked like an adult but it had a short stocky all black bill. Definitely no yellow tip. Only a very young Sandwich would show this, and there fore it would be reasonable to say it would have scalloping on the mantle and wing coverts. You follow?

This bird was plain grey. All over it had a very pale greyish pallor not like the white of a Sandwich Tern. We discussed various features as we watched it circle the bay with Black headed Gulls. There were both Arctic and Sandwich Terns offshore and a lone Common had gone north. This bird was not in their camp at all.

Some hastily scribbled notes were taken on site without access to references. By now I was convinced this bird was indeed a Gull-billed Tern.

As it drifted off south towards Boulmer, I decided to put the word out just in case someone else might pick it up.

Now here lies the danger. I am a cynic. If I had seen a message on WhatsApp saying Gull-billed Tern at sea in September, I would instantly have said 'Sandwich'. In fact I did this with my own sighting! I dont believe it myself. It cant possibly be a GBT, but it certainly looked the part....

Back home, I did some research.

Compared to our bird, I found the following -

Rump / Tail - Vinicombe states that this is the most crucial feature to seperate GBT from ST ( I'm sick of typing it). It should be grey and concolourous with the whole upper parts. This bird had an off white pale grey all over look to it, but the tail was certainly paler than the mantle. I percieved a greyish centre with white outer tail. John felt it was all whitish.

Primary pattern - Bird had greyish wedges up prmaries on upper and undersides. Apparently OK for September but should still be pale, which it was. There was a darker trailing edge line, quite defined.

Cap - By late Sept, ST shows a large white forehead up ro central crown almost. GBT has uniform white speckling all over the cap. This bird has a very restricted white forehead upper bill. No Crest could be seen at all. The rest of cap appeared all black.

Behaviour - Our bird dropped to the surface of the sea and caught a tiny fish. It didnt dive, more belly flopped. I did not know if GBT did this at all. BWP Text states 'very occasionally'. I wondered if a migrant out of habitat would do this for food more freely?

So this seems to be a bird that creates more questions than answers. I will write up the sighting... 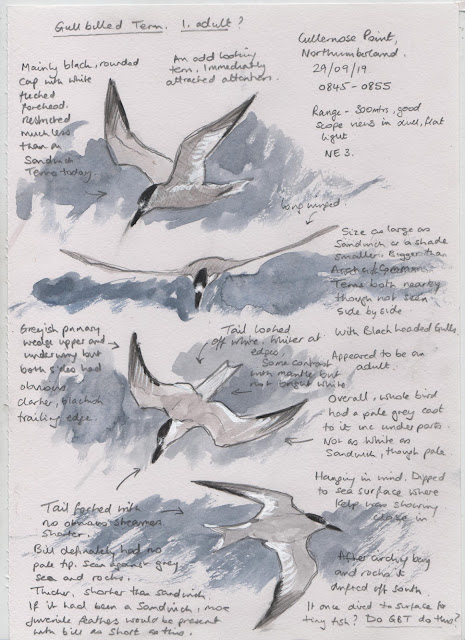