On Monday 1 hr 15 mins over high tide had a lot less than conditions indicated.

I hoped things would improve as the wind from the N increased.

Tuesday 1st October. Another day annual leave found me perched on the rocky outcrop again. Mostly I am alone here which can make spotting birds quite tricky. More  sets of eyes at places like Newbiggin assist observers, but I do like to make this spot my own.

Birds have picked up though still no classic there were birds in show constantly to keep the interest going.

Barnacle Geese 65 N
Bonxie 11 N
Arctic Skua 13 N
Manx Shearwater 13 N
Red throated Diver 17 S inc party of 12 close in, 8 N and 5 on the sea.
Teal 6 N
Common Scoter 26 N
Auks ( 1 minute count samples ) 6000 per hour N 90% Gullemots, the rest Razorbills and Puffins in that order.
Little Auk 1 N I hate early Little Auks! When they are claimed they are almost always puffins, but this one was typically very close in doing its side by side rolling flight along the breakers. Puffin seen nearby for comparison. 153
Long tailed Duck 1 fem N 154
Arctic Tern 4 N
Wigeon 5 N, where are all the wildfowl? In these conditions we should be getting hundreds of Wigeon.
Peregrine 1 imm glided alon the rock edges panicking everything.
Dunlin 1N my first patch sight record for the year.
The list above is in the order birds were added into the notebook.
Then, at 16.39 I was panning S and looked at two Kittiwakes going N. A few hundred metres behind was another bird low to the water. My thought process went like this...

As the Sabine's was lost to view, it was time to head home for tea. Not a bad day really... 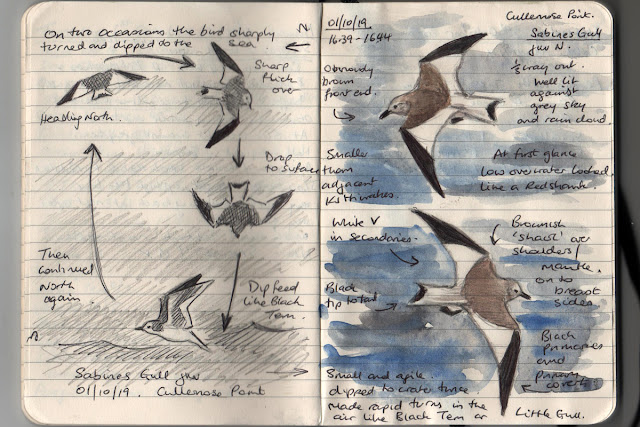