Its a funny thing to ask, but I see loads of people on social media the length and breadth of the country who's local patch is Spurn, Bardsey, Cley or where ever their county hotspot is. Most people have a nature reserve or a large inland water body, or a migration place where many sets of eyes scour it every weekend for the latest 'rare' but I only see a few people with a random place that very few birders visit. Steve Gale at ND&B has one such place here.

My patch is another. Before I lived here, I used to call in to the area occasionally, but only once did I come here to see a good bird - a juv Red backed Shrike found by Julie Roper about 12 years ago. Even the coast line facing east to the North Sea is quite mundane. It is a rocky shore with no areas for gatherings of birds. The landward side is just as bad, intensively worked, mixed farmland. It is scenic but not too bird friendly really.

It is this that makes it quite a task to keep to the patch when half an hour drive North takes me to Holy Island and another half an hour South takes in the ponds and wetlands of Druridge Bay or Newbiggin. But, I live here, so technically I can visit every single day, even if its just watching out of the window, so over the past 9 years I have stuck with it.

Maybe once a year, if I am lucky, is there a period of weather that makes even this place worth a look, and most often that involves Seawatching. Its the sort of activity that can put you on a level with some other places, at last. This weekend, proved to be my 2018 window of opportunity to add a few good species to the year list.

On Saturday and Sunday I spent 6.5 hrs, alone, glued to my scope and bins enjoying the conveyor belt of birds rattling through my mediocre patch. For once I felt like a contender!

All moving North unless otherwise stated.

Plus uncountable Gannets, Kittiwakes and Auks and a Short eared Owl and a few Starlings in-off right past me. Further south observers had Leaches Petrel ( one even on Howick patch per Ben Steele but I missed it along at Craster) double figures of Little Auks and Poms, but when sitting watching by yourself its easy to miss out.

I am not too concerned, after all I had a right old hatful of decent patch birds to boost the total but its high time some quality passerine action came my way. Fingers crossed. 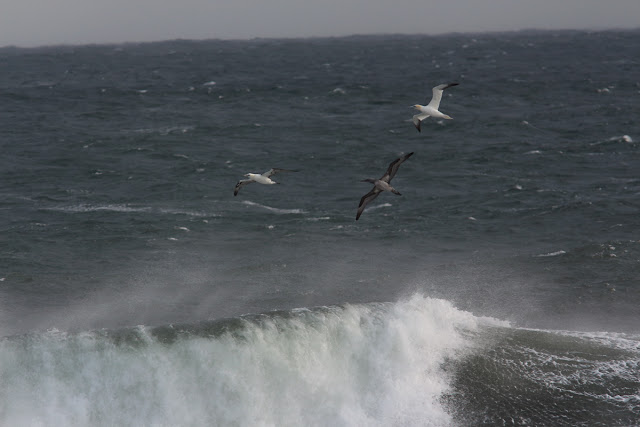 Together we plough that lonely ornithological furrow...

HI Stewart, I always read your posts! So you have at least one person that follows your blog....Your patch is at least two or three divisions above mine. I watch an inland gravel pit on the very edge of the Pennines in North Yorkshire. Few sea birds there (though we missed an arctic skua on Saturday which visited the next gravel pit up!). Waders declined greatly from when I started watching it 30 years ago; passerines similar, even species like pied wagtail have seen a great drop in numbers with spring passage virtually non-existent now. However we get the odd relative goody and those days make up for all the other more routine visits. We vis mig regularly and can get good mornings especially at this time of year, look for Hay-a-Park GP on trektellen. Keep up the blog - it's excellent, well written and brilliant photos. You have a great coastline up there to explore and enjoy. Stephen Root

My patch is Uig Bay up at the top end of Skye. I found a Yellow-browed Warbler last week (incredibly, the first Skye record was only in 2016) and today I added Little Grebe to my patch tally, which now stands at a mighty 106 species in a little under two years. There is one local birder, but he's crap. Oh, apart from his Marsh Warbler, two White-billed Divers and the Ivory Gull which loitered for a month. All before I moved up here, obviously!


I share my patch with dog walkers and sheep farmers (or inbred crofter types, as I like to call 'em - seriously they're all cousins. And married to each other. Go on, just check the finger webbing...) but at least they've stopped giving me funny looks when I wear my bins into the local shop. Acceptance no, tolerance aye! :)

Hi all thanks for the comments, I had missed them!
Steve - We do...
Stephen - Do you have a blog I can follow?
Seth - Been to Uig ( well, the cafe and the bogs) its nice...
Kev - Some great stuff there imagine if you got out more?

Hi Stewart, Glad my comment got to you eventually! No, no blog of mine graces the internet. I would find it hard to get the time and the inspiration - and have great respect for those of you that can so regularly find both. If I do one day start one I'll let you know.....
Stephen