As I have commented earlier on 'the big one travels alone' a comment by the late and great Tim Cleeves, Thursday 18th October produced news of probably the most unusual and best county record of the autumn. Way inland at an unknown spot called Haughton Strother Gravel Pits, Ross Ahmed stumbled upon the unbelievable. Not the one biggie but two - GULL-BILLED TERNS!

He got the news out early evening on the Thursday only to be met with an even bigger bombshell that these two first winter birds had been here since the 4th of the month! Two full weeks for a massive county blocker to be kept hidden away from prying eyes. Now, each to their own, I am the first to say that we dont have a god given right to bird news, but these two are viewable at a safe distance from a wide public bridlepath, so whats with the secrecy? I can only think it was due to the lack of parking out on the main access road which was pretty hair raising.

Anyway on Friday I took my kit to work, a full 38 miles from the site and awaited news. I had only been at work an hour when word came that the duo were still present and in a pattern of rest on the pits then flying out to feed in newly planted corn fields, so off I went to begin a 4 hour lunch break.

The road nearby was like a version of the Nurbergring, with lorries and luton vans speeding over blind summits and around corners, so it was disconcerting when I had to park the car in a layby, about a mile away, and walk along its pathless edge.

After dicing with death, the viewing spot was quite open and raised above the pits and the birds were easily seen. What a relief after missing one at Bothal Pond a few years ago and further back missing a pair that were tracked along the coast north from Whitburn.They sat and preened ona small gravel island beside a few black headed and common gulls then flew out to the fields and dip fed onto the ground, probably for worms. We aren't used to terns land feeding here in Northumberland...

These were my third British lifer of 2018 and my second county tick, taking the list to 416 and 344 respectively. I wonder if this autumn has any other surprises up its sleeve? 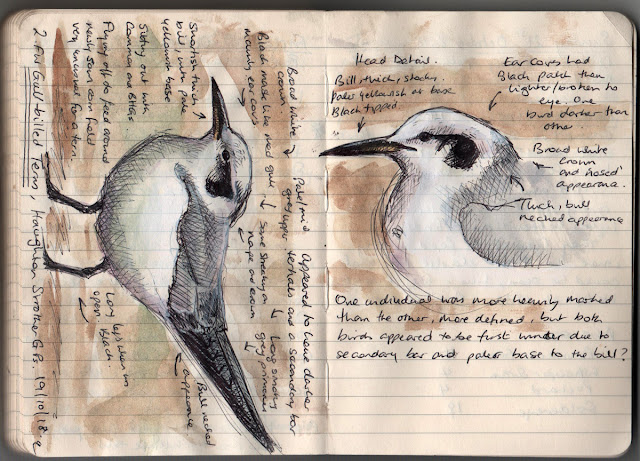 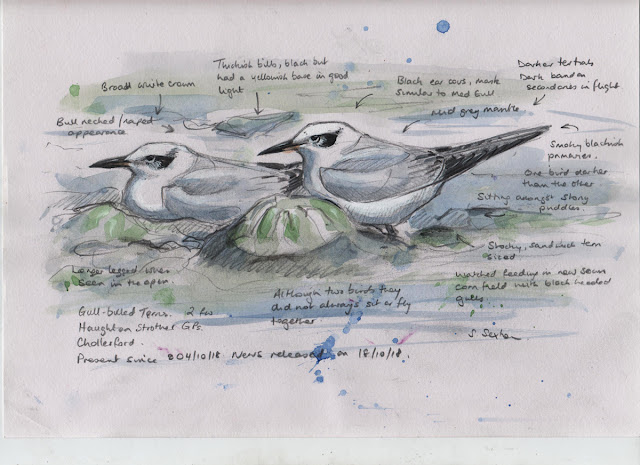 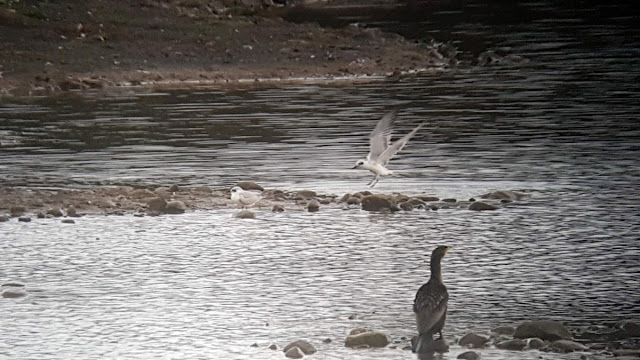