This morning I met John at Alnwick Homebase and we headed down to Lynemouth Flash to see if the Citrine Wagtail was still around. It only took 5 minutes to realise it had departed overnight, so we headed up into Druridge Bay. First stop was quite interesting.

As I pulled into the roadside next to the pool north of Cresswell Pond causeway, I said to John, its a good time for Temminck's Stint this. Also this morning I commented to John Atkinson on Twitter that the shower overnight was good for grounding waders...so we scanned the muddy edges. Soon John said, 'Theres a small wader over there'. I soon saw the white belly giving it away and it immediately appeared small, so I suggested we need to get the scopes on it and bailed out of the car.

As soon as I got on it I could see it was a Temminck's Stint! Worse though, it was crouching and looked ready to flush. After a few seconds, it seemed to settle and began to feed then preen and bath in the shallow water, so I put the news out. I looked up at John briefly and then back at the bird only to see an empty patch of mud where it had been. We hadn't even seen it fly off, but there was no further sign by the time we left...

Anyway, I managed a drawing and some notes, then added colour back at home - 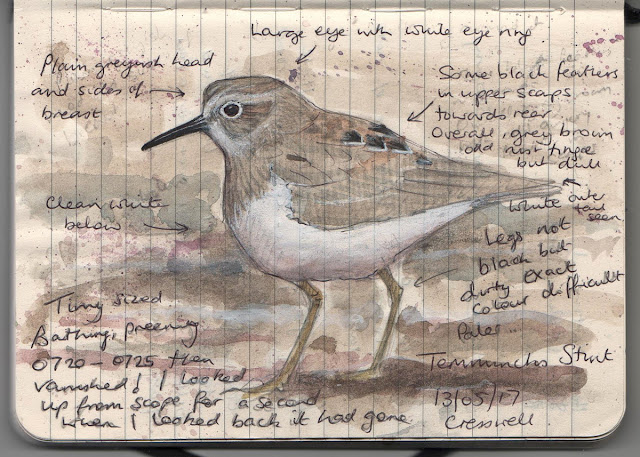 We celebrated with breakfast in the Drift Inn Cafe and very nice it was too...

The sun began to shine so we decided to have another look up Alnwick Moor for Green Hairstreaks despite not finding any here for a few years. Rather than checking just the known spot we ranged half a mile further over and were please to find a couple of males holding territories in the birch and bilberry scrub. Also here a Cuckoo showed well calling next to the car park. 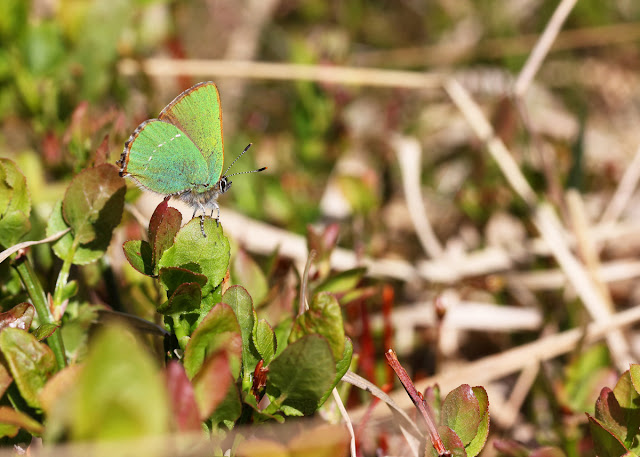 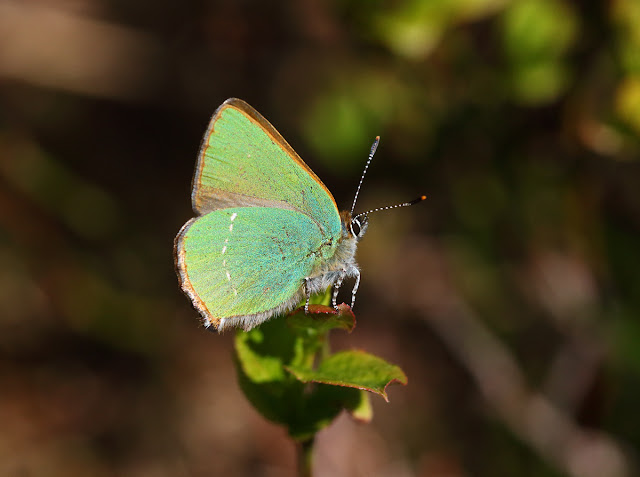 Was heading inland Sunday morning so didn't particularly want rain although we've been in need of some for a while now. Was picking one of the lads, who doesn't have transport apart from his bike, up in Ashington and having not seen the Citrine Wagtail chanced my luck that it might still be there...it wasn't, as you know Stewart. As i'm getting on i'm finding "stuff" I learned last year has seeped away somehow & I need refresher courses every spring and autumn on the birds I might come across & funnily enough I had been brushing up on my Stint recognition. Your artwork confirming unsurprisingly what the book said LOL. I might get something in the morning !!! (ever the optimist)
Nice bumping into your good self at Boulmer the other day. Always enjoyable.