The weather today was quite, er, inclement. At first light there was about an inch of snow and the wind was a force 8 easterly. I headed off to work, after meeting an electrician about some wiring in our house, and by the time I got to Amble I could feel a day's holiday coming on. This was brought about by my car skidding across the Hipsburn roundabout into the path of an oncoming car and only narrowly missing disaster. The return home was just as bad, especially the RAF base bank, where two vans blocked the road as they slid back to the bottom. You wouldn't believe so little snow could cause so much trouble. I dread to think what would happen if we got a foot of snow like the south east. WHERE ARE THE GRITTERS!

Anyway, before leaving Amble I stopped in at the harbour to see the sea coming over the breakwater... 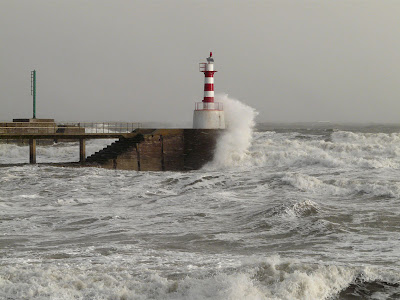 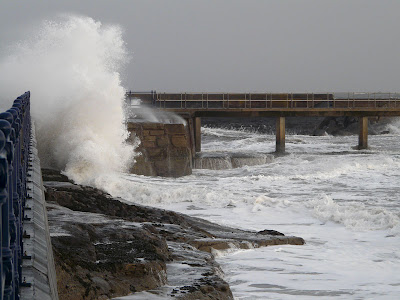 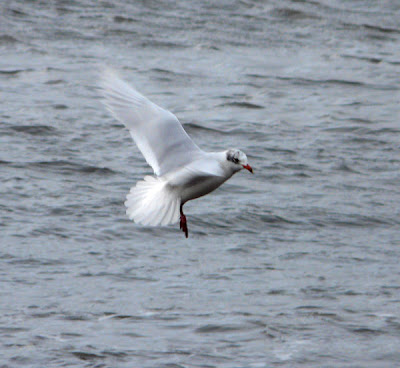 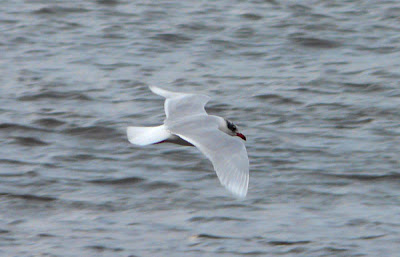 The Serbian-ringed Mediterranean Gull was loitering nearby.

Shortly after lunch I decided to brave the elements and have a wander around my new patch, the farmland viewable from our new house. 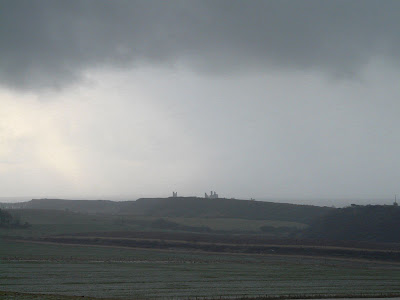 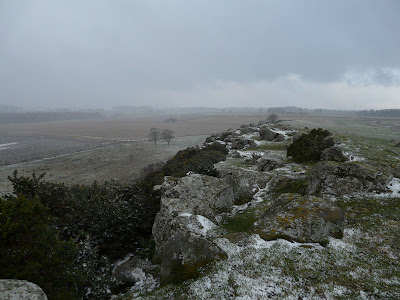 This is the view (above) from the trig point on the top of the Hips Heugh. Its only 58 metres above sea level but in the wind and hail it felt like a mountain top. In the distance, Dunstanburgh castle looks forboding...

Above - The only life at the top was a nice flock of about a hundred thrushes, consisting of equal numbers of Fieldfare and Redwing with one or two Mistle Thrushes and a few Starlings, trying to get out of the gale. 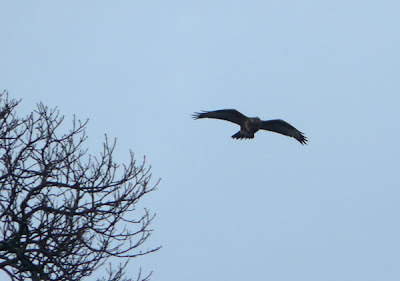 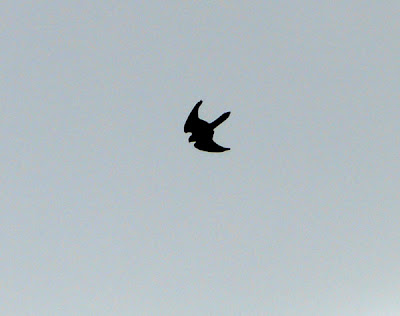 On the way down, a Kestrel was pointed into the teeth of the gale, while a Buzzard took the easier option and sheltered in the woods. 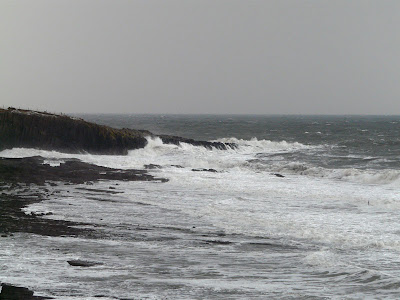 At the bottom, Cullernose point looking about as bleak as it can. The cliff with the waves breaking over the top are about 20 feet high at that point...

Off again tomorrow but will be working on some inside jobs at the new place.

It's not as bad down here as the news stories make out Stewart! Hardly what I would call cold!
Some great views there from your new Patch!

Sorry to hear that you had hijinks at the roundabout but glad you're alright! Looks as though you had a good day despite your mishap!

If you'd had a foot of snow as we had here Stewart, you, like nearly everyone else, would have not been able to get to work!! It's been great to have so few cars on the roads :D

Plenty of snow, here in Yorks and more to come overnight. The strong winds never materialised down here though, Stewart.

The Kestrel pic is a stunner.

Can you imagine if the the Canadian media went haywire or transport ground to a halt every time it snowed?

Ah Hipsburn rounabout, often thought of as the centre of the universe to some locals.

WB / Dean - Hopefully our gales will blow a Long tailed Duck or something your way...

T - Only a near mis but it sure wakes you up!

BB - Look at Wytchwood for some good winter weather I say...

Yes its me, been distracted for a while as me house got flooded by the Wansbeck so we're living in Gosforth.
Surprisingly quiet despite all the traffic, luckily we have a few trees behind the house so I get a regular visit from a flock of Long tailed Tits and a Great Spotted Woodpecker.

Hi Stewart, glad to hear you were okay with the near miss. Mind you it looks nowt butta spring day up there compared to the stuff we've had thrown at us in Somerset, had to put me cap on twice to fetch another can of lager from the shed, life doesn't get tougher!

Cracking shots of the BoP's too