Half past eight this morning was very poor indeed. It was almost dark with a strong SE7 blowing some sleet horizontally against the windows, but after lunch the wind dropped and the sun came out, making the day seem almost spring like.

Until 2pm we were working in our new house where I added to the garden list with a nice Reed Bunting calling from the buddleia on the drive. A couple of Yellowhammers were in the small copse next to the garden and a Grey Wagtail flew over.

As the weather was much better and our days work was done, I went to collect the dog and returned to have a stroll around the area. 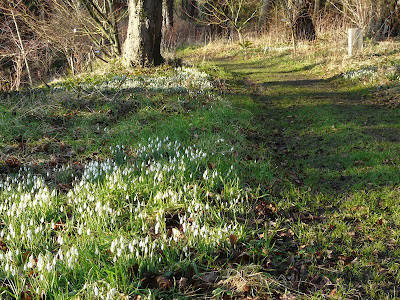 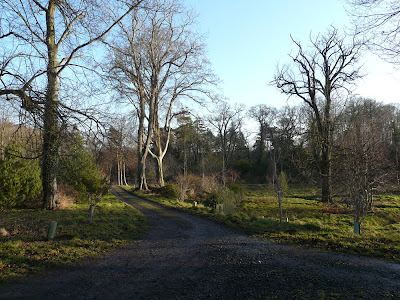 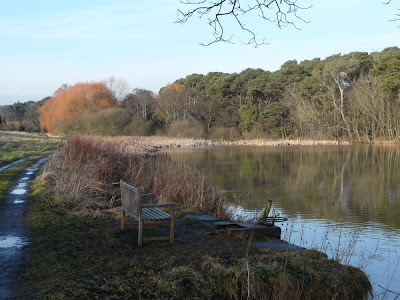 Unlike Boulmer, there are some nice wooded areas here, though they are more parkland than wild wood there are still good numbers of woodland species to be seen. The small lake holds a few ducks on occasion too, but today all I could see were 1 Little Grebe, a Moorhen, and the resident Mute Swan pair. A Goldcrest called and displayed its crest in the willows nearby.

Further on, 4+ Bullfinches were feeding on dropped seeds and a Jay was mobbing something in the pines. Back in the village, near our house, a Marsh Tit showed but proved too elusive to photograph.

We then did a lap around the road edging the coastal fields and had 153 Curlew, 157 Golden Plover, 29 Lapwing, 4 Mistle Thrushes and 2 Fieldfares. I heard my first Skylark of the year, but I still haven't seen one yet...

I havent had Skylark yet either, thanks for the comment sbout the Mull info.

Your new patch looks so good Stewart - not a case of what you will see, but what you wont!

PS our local foxes aren't immune from the odd 'hunter'. Some local Wan*er shoots them for fun. I sometimes bump into him on one of my walks.I hope I find him in this cold weather in need of help. I wouldn't p*ss on on him to warm him up.

Yellowhammers eh !!!! took me awhile last year to see any.Have you worked out the bounds of your new patch yet.
Brian

Thanks all.
Brian - No not yet. I will have it sussed by the time I move in though...

No Skylark for me either.

One half-hearted attempt to sing on Sunday near Cresswell is the closest I've got.

It looks as though you've chosen a great spot for your new home Stewart - all those wonderful birds on your local patch!!

Please let me know when you start doing B&B, or want some hired help! Lol

Well funny you should say that Tricia, there is a BnB and a holiday cottage in the village too...

What a beautiful place. I love the pictures.

Good seeing your new patch BB, will make a change to have woodland and fresh water to hand. You'll be sick of Coots by this time next year.

Will look forward to the next installment. BTW do you ever look at the Urban Extension blog, Jane there did a fab Google Map. I haven't worked out how to do this yet, but could be a good'un for your new patch...

Coots still scarce on the pond Andrew, though I think I have seen a pair nest here? It will be interesting to see if they still do...