How exciting is this!

Well to me it is anyway. Alan Thompson kindly sent me these photos of an Oarfish Regalecus glesne he found washed up on the beach at Druridge Bay, Northumberland. 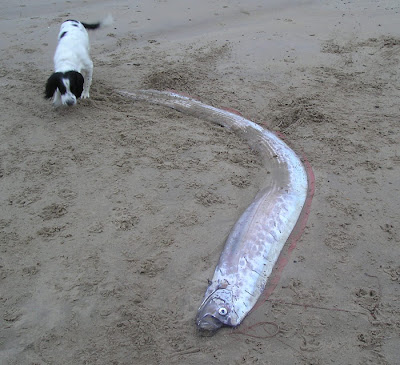 This is an extremely rare fish and was only filmed alive for the first time in 2001. As they live at depths up to 1000 mtrs they are rarely seen alive at all. See here for a few pics of a live one.

Believed to be the longest 'bony' fish on record, Oarfish grow to 36 feet in length and have been found washed up all over the world. They breed off Mexico, and are responsible for many ancient reports of Sea Serpents by ancient mariners. I don't know if one has ever been recorded in Northumberland before.

If I had time I would have twitched it, but I'm not too sure of its exact location. Chances are it has been washed away by now. 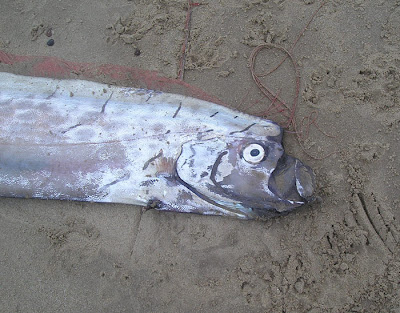 Interestingly, a Ray's Bream was caught at Newbiggin only a few weeks ago, another species rarely encountered alive...

PS. I've been 'Googling' this fish to find out a bit more. It seems they are very rare even in world terms with only a few being found washed up each year. Alan sent me another email yesterday saying that he has also found / seen Deal Fish, a species very like Oarfish but shorter and from the north, latin name arctica and Opah, a large, dustbin lid shaped fish like a Sunfish, but better coloured, both on Druridge beach. I might pay more attention to beachcombing in future...
Posted by Stewart at 7:21 pm

Wow, what an interesting fish.

What a find! If I found it I would have discarded it as large Eel or something. I'm interested in fish but I don't know much about them. I

ST - No. I think they just get stranded in shallow waters ( the North Sea!) and die.

Nigel - Yes its a goodun. Have a hunt on 'tinternet for them, its a great record for Northumberland.