Today was fair but overcast and cold. It was also the first free time I've had to get out and clear up some birds for the Quicksilver Festive List...

The first four stops added very little. On route to Linton from the Linton Roundabout I stopped to scan two pools in a ploughed field that were covered in gulls. Best here was a group of about 12 geese - 3+ White fronted Geese, 2 Pinks and the rest were Greylags. 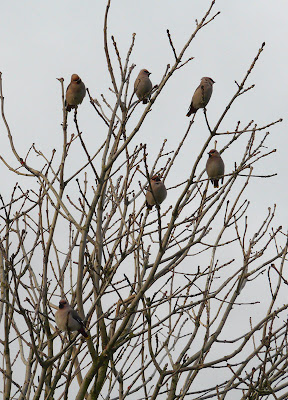 A hundred yards further on the straight road, a small Ash sapling was growing from the hedge. Distantly I could make out some dumpling like shapes in the branches... 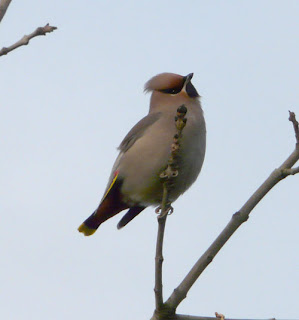 It had to be, my old mates the Waxwings! Six of them sat still while I took some shots and they were still there for Brian 'Northumbria Birding' over half an hour later on my return ( his pics are better than mine). One even looked down at me with a knowing eye... 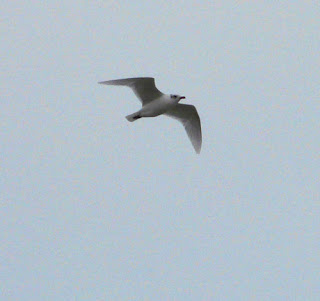 At Newbiggin a very brief stop and I soon had an adult Med Gull cruising up and down the prom...


After Newbiggin I took the coast route past Lynemouth to view the roadside flash. As I pulled up a chap was scanning from his car further up. A flock of gulls got up off the water and the chap leapt from his car and began waving his arms to me. As I got out of the car, he was shouting "Iceland Gull, up there!" and sure enough there it was, a second winter bird all ghostly white slowly flying off with the Black headed Gulls. No chance of a shot though, but have a look at ST's blog, its his bird...

Onwards and upwards, to Cresswell Pond. I stopped to tell a lady with an SLR camera and big lens about the Iceland Gull a mile down the road. She wiped me off her shoe with " No light"!!! Now what that's supposed to mean beats me, but the apathy of it all depressed me so I gave the Bittern and Water Rail a miss, they had been showing, and moved to Bells Links. I just couldn't face the hide and crack like that again...

At Bells, 5 Twite were on the roadside wires. 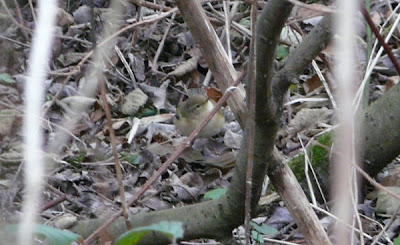 Biggest suprise of the day was this Chiffchaff in the willows behind the Budge Screen at Druridge. Its years since I had a Northumberland wintering Chiff. It didn't call at all and looked like collybita...

The list is progressing.
Posted by Stewart at 6:15 pm

Some goodies there, Stewart. A winter Chiffy would go down well, here.

Nice list you're heading up Stewart, are you including that fish though :-)

Dean - Yes I'm quite pleased.
BR - I might tick it, even though I didn't see it, it just depends on what the competition is counting! I've also got Muscovy Duck, Masked Lovebird and a free range oven ready turkey as subs....

Well that really was a mad dash - and some great birds along the way.

Whilst I can understand the comment (no light!) from the lady with the big lens - I would have at least wanted to see the Iceland Gull; particularly as it would have been a lifer.

A mad dash, with a knowing eye and local knowledge.
Bet you hovering around a ton.

Three stuffed owls, in the pub today and tommorow i will have to visit morpeth for the stuffed yorkie. as i'm now slowing.

And who drove straight past Linton thinking there'd be nowt new there from the day before......that'd be me then.

Hi Stewart,
Happy new year to you. My list for the festive period wont make 70!!

Thanks for the information. we will pass it on to our readers and we have a blog
that caters to blog readers in cheviot hills and Beverly hills. So well pass on out our senior club. Thanking you. cheviot hills homes for sale