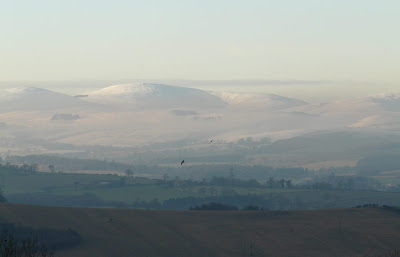 No proper birding today. I woke, after a late night at chez Biggs, with a wooly head so had a lie in. The rest of the day was spent catching up. I took the pic above from Corby Crags, west of Alnwick after I had been sent on a mission to collect greenery for Jane's wreath making exploits.

Bunty's morning walk was around the Howick woods. On the well flooded pond, a Little Grebe was the only thing of note, while 50+ Redwings, 5 Mistle Thrushes and 12+ Blackbirds were feeding in yews on the way back.

The afternoon stroll was at Boulmer. The only thing that merited a raised binocular was a group of 3 Red breasted Mergansers flying north.

Stewart - that's a stunning picture and so atmospheric!!

I don't know Alnwick at all but I'll have to put it on my "to visit" list!

Thanks Stewart for adding me to your blog list.

T - This is the view towards Cheviot from the road side a few miles west of Alnwick. We do have some great scenery within a radius of no more than 10 miles. The majority of my pics on the blog are from this area.

Nice shot Stewart, but can you get rid of that white stuff please before I venture north next week for festivities !!

BR - No probs Andrew, the forecast is mild and wet for the next week....I bet you'd like the snow though really ;)

Sounds like a good nite had by all chez biggs! Likin the new-look to the blog - like a crisp winters day!

A wonderful picture you have there.