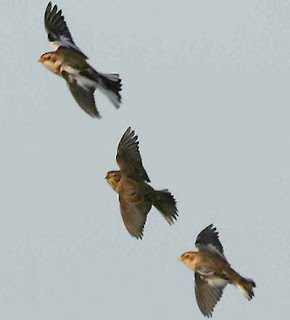 Today was a nice day. Generally bright with a light S2. It was made even nicer when I took Bunty out for her walk. The outward route was pretty much usual Boulmer fayre with 20 Grey Partridges, 48 Pink footed Geese S and a Sparrowhawk, but as we turned to come back something flushed the passerines in the stubble.

Lucky for me they reached the far side of the field then circled and came right back to me and showed over head. The calls were quiet but unmistakable. 5 Lapland Buntings! Calling a soft 'tuk' like a Brambling, then the 'prrrt' 'teu' at least one was a male with black along the breast band. Fantastic.

Although I have had Lap Bunting on the patch before, I have never had 5 together, a good count by any standards in the county today. They danced around in circles before landing again on the far side of the field where I left them alone.

I must apologise to the county lads for not putting the info out, but I didn't want people yomping over the farmland. There are no public paths over it but the farmer turns a blind eye to my tresspasses. What he would say if birders turned up through the day I don't know.

I will check them out tomorrow morning. If they are still around and can be viewed from a public area I'll put it out ( today I was on a public track when I saw them but unless they fly around you'd have no chance).

One of my patch highlights this year.

(Picture above stolen from web without any permission whatsoever...)

Nice find Stewart. I`ve not seen a Lap Bunt for many a year, or a Snow Bunt come to think of it.

I've got a lot of time photo usage without permission.

If they hoy it in the public domain what do they expect :)

Good records Stew. Always a delight to see or hear.