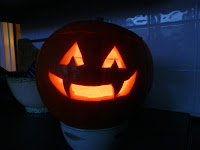 Each Hallowe'en a tragic phantom woman that gazes forlornly out into the crashing grey North Sea is said to leap from the edge to her peril near Cliff House at Amble. Her ghostly figure disappears before entering the water ( Maybe she has been seawatching at Boulmer?).


Another mournful Grey Lady walks through the front door and up the stairs into the drawing room at Craster Tower. Other spectres clash swords outside the building and the crunch of the wheels of an invisible ghostly carriage are said to roll up the driveway.

Warkworth Castle and the Hermitage are haunted by a knight, believed to be visitations from Sir Bertram, who killed his future wife in a tragic accident while Sir Guy the Seeker wanders Dunstanburgh.

The Deugar – or Brown Man – is said to inhabit the Simonside Hills protecting the local wildlife and nature ( he needs to do more work with Harriers...) while a black cat prowls under Rothbury bridge and a monk with no hands or face haunts the moors near Alwinton.

The gibbet up on the hills above Elsdon is haunted by the eerie presence of the murderer William Winter and spectral monks and a white dog are reckoned to be present on Holy Island.

In the 1960s a car's engine died without warning near the Otterburn battle site and the passengers found themselves surrounded by phantom soldiers that faded as they came towards the motor..."
Posted by Stewart at 5:29 pm

You forgot to mention the white-billed divers that haunt Newbiggin church point.

I missed them too.

And the birder that only appears out of the mist once every few years....

You forgot to mention those other Northumbrian mythical creatures - The Rothbury Cougar, The Bolam Lake Yeti and the South Tyne Honey Buzzards!