Despite the weather, or should I say because of the weather, a few visits were made to Boulmer today. The wind was a strong NNE7 with some awful hail and rain squalls. This morning I wandered the two stubble fields on the sea front, 1pm -3.45pm was spent seawatching and not seeing White billed Divers that were seen both sides of me! 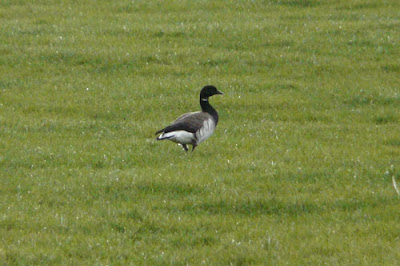 Above - This Pale bellied Brent was grazing in with the sheep opposite the pub.


The walk around the two fields had Buzzard, Merlin, Sparrowhawk and Kestrel, 21 Grey Partridges and quite a few seed eaters on the weedy edges - 7+ Yellowhammer, 12 Reed Bunting, 11 Tree Sparrow, 15+ Greenfinch and 30+ Linnet.


I reckon I missed a WBD when I had to go and 'assist' ( rescue is a better word, but we have to be humble...) a chap with two small children that had been cut off by the rising tide.

They had been wandering the rocky skeers with absolutely no regard to the tides or weather conditions. I watched them for a while assuming that 'dad' was in control. They moved out of sight under the cliff so I thought they had seen sense and gone on to the beach. I nearly had a panic attack when I saw them all walking back over the rocks out to sea even though only a narrow channel for escape was left. 'Dad' was about to paddle the kids to a watery grave into the deep flooding channel until I stopped him! By the time I shouted directions to the safest route this too was flooded, they were on an island. 'Dad' managed to carry the children over, getting himself soaked up to the thighs in the process. A close shave there...

No doubt tomorrow their holiday excursion will see them in the tower hut on Holy Island causeway while the car drifts off...

Ah, I've put a pumpkin on mine too ..... and I "missed" WBD but I think I stared at it and failed the id test. Rescuing Lemming Humans is a better reason.

Hi Stew, U had to look skywards for the second WBD! It flew along the dunes about 40' up when it passed Hauxley, if you were looking out to sea, u'd have missed it!!

Al - Maybe we were telepathically linked when we dipped the divers!

Ian - I bet it over flew the glass dome that covers Boulmer....