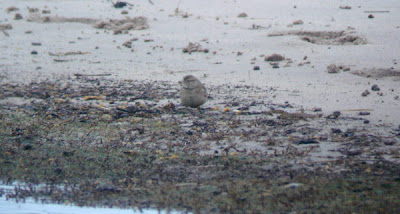 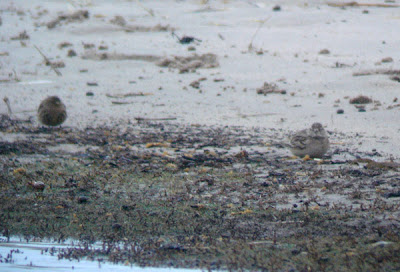 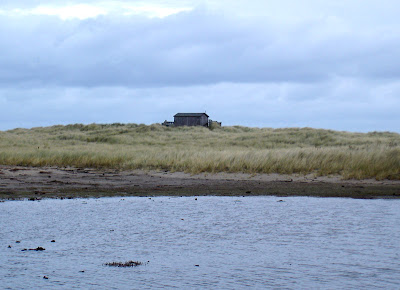 A cold NW3 this morning and overcast.

Stringy Newton rang me last afternoon to tell me about his find up there. As the time was getting on I decided to wait until today.Have a look at his pics on his blog.

At the Long Nanny, myself and Andy arrived shortly after eight am to find a small audience of three watching the Short toed Lark feeding in the saltmarsh slack behind the Tern Shed. It loosely associated with 20 or so Twite and flew when they flushed but did not appear to feed alongside and was quite independant.

This was an excellent find for our man in the north and a great way for local birders to end a flagging autumn. Short toed Larks are very rare visitors to Northumberland and were once a Farne Islands only bird. A few recent records have been on the mainland which is a pleasing trend. This bird was quite a drab female spuggy look-a-like and most likely originated from an eastern quarter. I suppose most of the north east Short toeds are eastern but the spring bird at Newbiggin a few years back was very 'orangy' and may have been west european.

A great bird, my third in the county.

While watching the lark up to 9 Snow Buntings flew overhead and a Merlin was on the hunt.

As we headed back to the car my phone rang and Gary was again one step ahead of the game, this time with a Firecrest just half a mile away at High Newton. We put a step on and soon had great views of the bird just overhead with two Treecreepers. An all too brief sighting though and the bird soon moved off into thicker cover.

A productive morning especially as I got an atlas square done too! This one was at Stamford only four miles down the road from Newton. In the hour count highlights were 26 Tree Sparrows and a nice Merlin perched on top of a roadside hedge.
Posted by Stewart at 6:14 pm

a good record for so far north and november

I nearly went but will wander up in a few day's. Any luck i may pick it up.