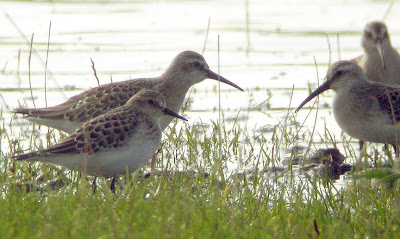 Above - Those were the days...Bairds and Curlew Sandpipers on the Bulls Mere. 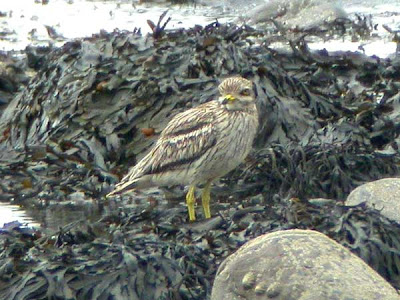 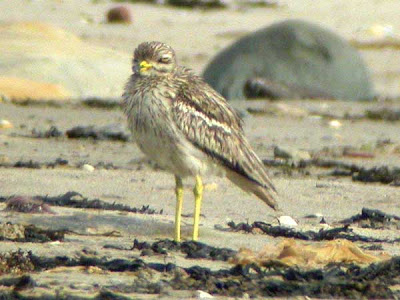 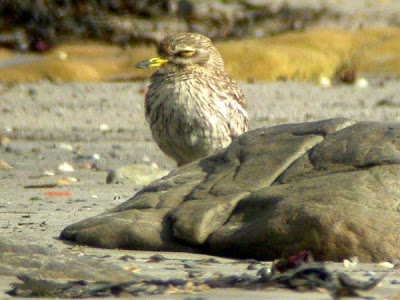 Above - Alan Gilbertson took these pics of the Stone Curlew and Bairds Sandpiper mentioned below. Even if you've seen Stone Curlew before, I bet you've never seen one in a rock pool. These birds normally like dry arid semi-desert. I suppose Boulmer was the ideal choice then!

Very mild up here at the minute. Yesterday was better than many we've had in the summer.

A morning stroll around Seaton Point yesterday had 6 Fieldfares, 5 Redwings and a few Blackbirds and Song Thrushes in the bracken. I could hear loads of siskins constantly over head but didn't see a single one. They are just too high up and too small to pick out. I did manage to get my eye on the two Redpolls that called overhead flying south though.

On the insect front I was suprised to see a Hawker Dragonfly, probably Migrant Hawker, patrolling the field edges at Seaton Point. They definately don't breed here, because apart from the sea it's like the Gobi desert, thanks to the excellent efficient draining system in place on the Boulmer headland. God forbid any moisture is allowed to gather for more than a couple of days. One thing's for sure, global warming couldn't flood Boulmer.

Now that's got me started.

Boulmer is believed to have originated as Bull's mere or Bow mere. There was a 'mere' in the field behind the pub next to the toilet block in years gone by. periodically, once in a while ( about as regularly as we win the World Cup), a pond gathers here. It only has to settle for a week and birds flock to it, and the farmer gets his draining gear out. The last time it was here was August / September 2005 when it held a Bairds Sandpiper, a dozen Curlew Sandpipers, Black tailed Godwits and even some ducks. It was probably responsible for attracting down a nice Stone Curlew ( mega rare up here.. nearly as good as the Baird's). It lasted a fortnight. The pond not the bird, before the farmer put in a field drain the dutch would have been proud of, and it has not held a drop since. To add insult to injury, the said 'pond' was mown and used as a five a side football pitch at this years Boulmer Fete.

Where was I. Oh yes, Seaton Point this morning. Today had a similar weather pattern but the thrushes have moved on and there was nothing much of note. Back at home, Siskins could be heard flying around all morning and I had two large (30+) flocks fly north, but as usual the rest were invisible. 90 Pink footed Geese flew S.

Tomorrow I'm out to do a BTO Atlas square or two. In Northumberland we are trying for 100% coverage of the county in both Winter and Summer so there's plenty to go at. I've signed up to 12 tetrads...so far.
Posted by Stewart at 8:41 pm

That's a sod, particularly when you think our taxes have gone to pay for the drainage.

We've fortunately had the opposite here in East Herts. A farmer has created a shallow pond (I think he's created it - there wasn't one two years ago anyway) primarily for shooting. We've had some smashing stuff; no Baird's, Stone Curlew, or even Curlew Sand, as its about 40 miles from the coast, but Wood Sand, Little Stint, Black-tailed Godwit; enough to keep us happy.

Green with envy...water water every where but not a drop to drink!