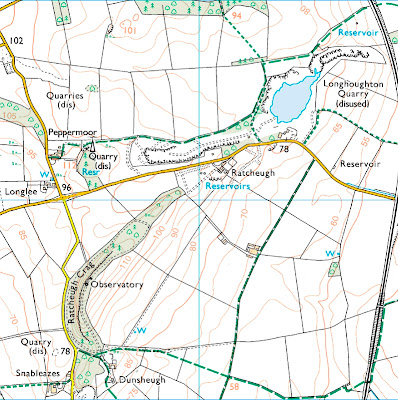 Above - The first 'tetrad' to count in my Atlas Squares. This is Ratcheugh, between Alnwick and Longhoughton, about a mile from home. It is officially known as - NU21-H. ( New map courtesy of Richard Dunn).

Over the next four years some of my birding time will be taken up counting the twelve tetrads I have handcuffed myself to in my area. A tetrad is an area on the ordinance survey map consisting of a 2 x 2 km square. Great Britain is divided into 100km, 10km and 1km squares on the maps. The one above is NU ( 100km sq) 21 ( 10 km sq) H (Tetrad Letter).

Two hours wandering around these 4 square kilometres produced 46 species. Not a bad total. Noteworthy were 74 Tufted Duck, 4 Buzzards, 17 Dunnocks, 16 Robins, 82 Blackbirds, 22 Redwings, 16 Siskins and 1 Lesser Redpoll. The other night a Barn Owl was hunting at this crossroads.

At home this afternoon, I was standing in our back yard when, in the space of about 10 minutes, a female Merlin dashed overhead followed by a single Waxwing. The Waxwing call alerted me to its presence above, then it obliged by calling another couple of times as it took its bearings before flying off strongly to the south. Nice one...

A single Peacock butterfly was still on the wing near the airbase. Only half an hour gazing seawards from Boulmer produced very little. 2 Red throated Divers south were the only things of note.

It looks like that's the autumn over for another year with not so much as a puff from the east ( now stop it, please...) I suppose there's still a slim chance of a very late flurry of activity. The wind looks to be a good cold northerly by the weekend.
Posted by Stewart at 7:28 pm