Low Newton by the Sea. 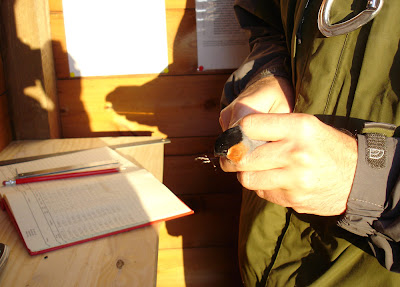 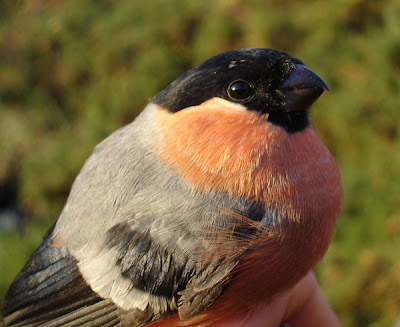 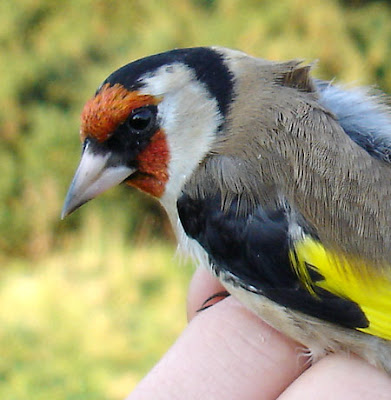 Above - Some ringing photos, Gary with a Bullfinch, and Bullfinch and Goldfinch just before release.

Today I decided to go poaching on Stringy Newton's patch. The first half hour or so was spent with Gary doing some ringing before heading down to the village and pool. The weather was nice and sunny with a sharp, cool tang to the breeze.

Going around Gary's nets we saw, but failed to catch, 1 Brambling and several Redwings. A single Fieldfare flew west.

Down at the village, two male Great spotted Woodpeckers were in conflict in the garden next to the square, and could well be of a continental origin.

The pool was well stocked with wildfowl compared to other summer visits. There were 4 Scaup, 1 Goldeneye, 10+ Wigeon, 6+ Tufted Duck, 20+ Teal, 1 Shoveler and 2 Gadwall. Moorhens were all over, I counted at least 34 and I'm sure many more were clucking from cover, there were 5 Snipe and 2 Ruff but best of all were the two Water Rails parading right in from of the hide in the sunshine. A bit like the 'KitKat' advert ( you know, the one with the bloke trying to snap the Pandas in the zoo), as soon as one decided to stay in the open for a good five minutes or more, my camera batteries dried up. Great.

A male Snow Bunting announced its arrival by calling before it circled the pool and briefly tried to land before heading away north.

I wonder what I missed at Boulmer? I'm on holiday now for two days so more posts will follow...
Posted by Stewart at 7:32 pm