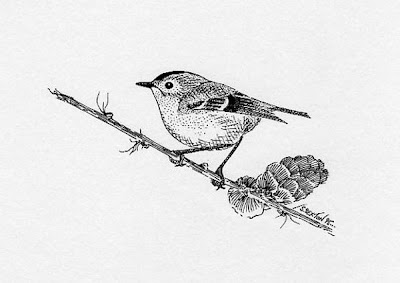 Above - Goldcrest. A drawing from some years back...

A nice day. Calm, quite mild and fine.

Walked Bunty around by the caravan site and Seaton Point. The calm, anti-cyclonic conditions meant that calling birds could be heard from quite a distance overhead, showing that some visible migration was taking place.

12 Blackbirds, 2 Redwings and a Song Thrush flew W from the caravan site while Skylarks could be heard unseen as they passed over. 2 Siskins flew N here, the first this year, and Tree Sparrows were buzzing about, mostly unseen, though several parties totalling 40+ were at Seaton Point.

Near Seaton Point House, 2 Twite flew S, another patch tick and 30+ Linnets were in the bean field. 7 Yellowhammers and a few Reed Buntings were feeding along the weedy edges as were 2 Stonechats. The latter were being chased around by one of those grey 'continental' Robins. At Sea, 1 Goldeneye and 9 Common Scoter flew N and 20 Wigeon flew S.

A Weasel showed well at Seaton Point House on a stone wall. It looked quite groggy as if it had just woken up and was even yawning in the morning sun. Great little things.

This afternoon we all took a walk through Thrunton Woods. The autumn colours were fantastic up here, pity I left the camera at home! We saw 1 Jay, 30+ Siskins, 1 Great spotted Woodpecker, 5+ Redpolls ( including one calling overhead in a very deep, crossbill like tone that was very probably a Mealy) plus plenty of Coal Tits and Goldcrests.