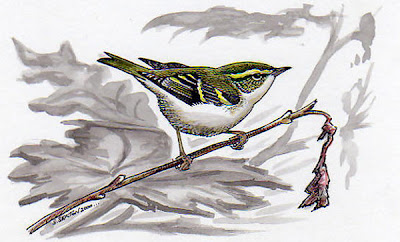 A proper October day today. Drizzly rain until 10am with a very light N1 and overcast.

Spent the morning giving Boulmer a thorough going over, getting soaked in the process. No Siberian Blue Robins or similar megas as suggested previously ( well what did you expect?) but one or two migrants around including a couple of patch year ticks.

After trudging farmland hedges and snipering illegally around caravan sites, being harassed by bullocks and almost hung up on barbed wire I felt I deserved the Yellow browed Warblers, yes thats right, plural, that were in the small housing estate, Bowmere, just before time for lunch.

I parked the car at the entrance to the estate and strolled in, not expecting much. The four trees on the edge had nothing so I wasn't hopeful. As I rounded the corner into the cul de sac, that familiar 'tsssweee' call rang out quite loudly from an isolated small Poplar in the front garden of one of the bungalows. I positioned myself not to be staring in through a living room window and was ready in case the bird flew, it began going ballistic, calling about 20 times in as many seconds. I figured that it had either found a mate or it had found a long eared owl. Just then a movement caught my eye in the foliage and a tiny stumpy warbler flew out, over the roof opposite and dropped. Being suspicious I waited a few more minutes at the Poplar. Sure enough, a Yellow brow was still there, and showing well. Keeping an eye on it I quickly checked the rear of the bungalows opposite and was pleased to find the second, brighter, bird in an apple tree, also seen well.

Cracking little birds, all the way from the siberian taiga. Or are they? Their numbers along the east coast in autumn now are so strong that they might just be living a bit closer. Scandinavia maybe?

Also today, 11 Redwings, 1 very late Willow Warbler, 1 Blackcap, 3 Goldcrests, 1 Brambling heard in the drizzle but unseen, 10+ Robins, 4 Song Thrushes, a dozen or more Blackbirds, 6 Reed Buntings, 1 Snipe flew W, 1 Sparrowhawk. 33 Dunlin were on the beach but there was very little at sea, other than 2 juv Common Terns still lingering ( and I had two Arctics midweek).

Enjoying reading the blog a lot. I had a walk around the area on Sunday morning without seeing much in the way of birds. However did manage 4 Otter together on the shoreline!! Caused a frenzy amongst the gulls so keep your eyes open.

I also like the doodle, my favorite bit, the withered lea.
Seriously stew you should do a lot more of this.

Smashing record, and very good drawing. Agree with st that you should do more.

I'm not convinced that Inornatus are getting closer. It may be that a local breeding population has found a new wintering ground in the UK, similar to the wintering Blackcap population from Germany.

Thanks all.
T - Where were the otters , I'm chomping at the bit for the weekend!
DD - I like a theory.The thing is, hundreds of YBW's arrive in autumn and maybe two are found in Cornwall in winter. Where are the rest?

well ... increasingly some are found wintering in the UK, along with Dusky warblers, and they may migrate onwards through the UK to Spain. A YBW in Weymouth last winter was v difficult to connect with, so many could go undetected inland

That is a marvelous drawing.
Pablo.

Cheers Pablo, but if you look at my art links you will see some 'real' artists at work...