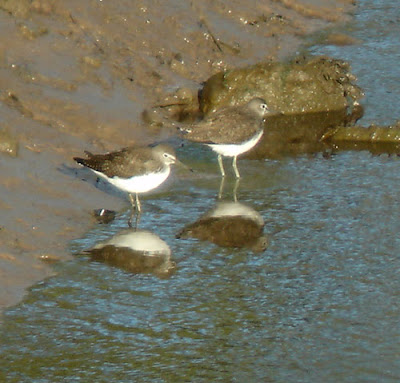 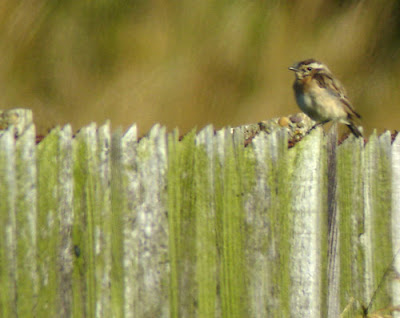 Today was sunny with a cool NW breeze off a high pressure in the atlantic.

Also around 2 Yellow Wagtails, 2 Stonechats, 1 Grey Partridge. The Sparrowhawk pair have successfully reared a brood for the second year, with 3 or 4 flying young begging for food.

River Aln, checked at Foxton Bends, the new flood workings at Alnmouth and the waterworks.

Green Sandpiper 2 on river flats. Quite unusual here unlike the more regular Common Sandpipers of which there were 13+ and 3 Greenshanks. A juvenile Little Ringed Plover was on the new saltmarsh scrape.

After this I had a check around by the water works where one or two migrants were attracted to the insects around the filter beds - 1 Whinchat, 2 Whitethroats, 2 Willow Warblers and 20+ Sand Martins. A couple of Snipe, 15 Goldfinches, 7 Mistle Thrush and a Stock Dove were in the damp field nearby. 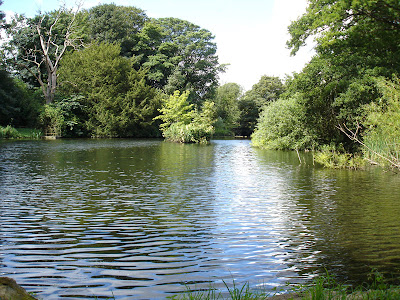 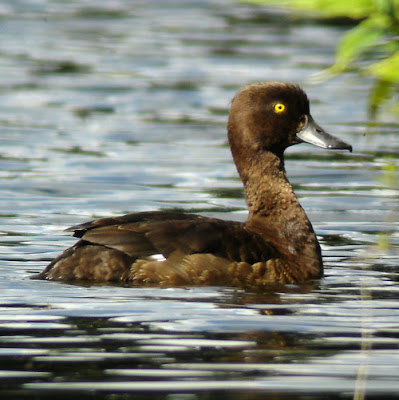 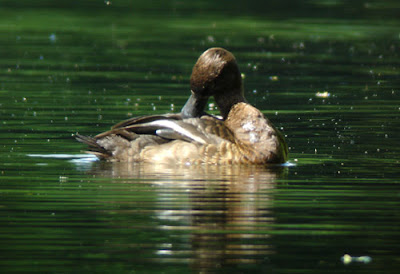 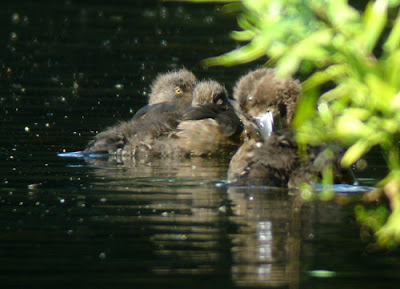 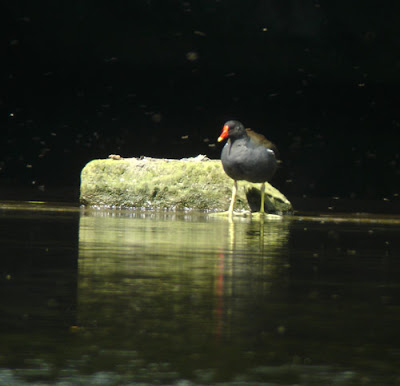 Above - Rock Village Pond, Tufted Duck with her ducklings and an illuminous Moorhen.

The village of Rock is about 4 miles up the road from home. It is very scenic and has a large village pond that attracts a few birds to breed. The surrounding farmland is managed organically so there are often good numbers of the common species plus the odd unusual thing like quail or spotted flycatcher, though I didn't see any this morning. Still it was a nice quiet way to spend half an hour.
There were 3 pairs of Moorhen, a Tufted Duck with 3 ducklings, Little Grebe and Grey Wagtail and a Chiffchaff had fledged young in the bushes over hanging the water.

You had a massive and unusual bird for Boulmer today. made it's way south to sunderland.
Chinook( prob spelt wrong) as well as the usual sea kings. must look at Rock next time i'm up your way.

Well S, Chinook is a regular visitor here, though it doesn't breed. A couple of times a year one spends a few weeks on site and can be heard calling before flying its display route up the Aln valley to the Cheviots...

Cheers BB ( BB2)? I used to have you as a link but I thought you had stopped posting. Good to see you back...