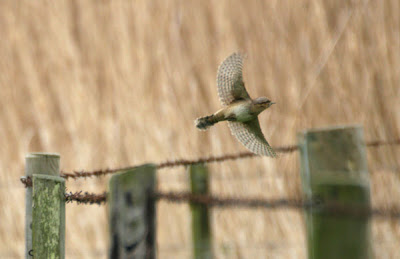 Above - Wryneck, Newton Pool, Saturday 12th May 2007. Found by Gary Woodburn, photographed by unknown, totally dipped by me. Some you win...Nice photo though, I hope its owner doesn't mind me using it. If you took this photo please leave me a comment and I'll either remove it or credit the picture to you. Cheers.

A catch up from bits and bobs through the week. On Thursday evening between showers a good flock of 140+ Dunlin dropped in to Boulmer beach for a short rest from their northward journey. All were in summer dress bar one that got the pulse going for a second until I got a better view.

Saturday 12th May 2007. The weather was cool and overcast with showers and a NE4 blowing. At Boulmer first thing, a Common Sandpiper was feeding on the rocky shore below the seawatch seat. 2 Swifts flew north from Alnmouth. Other migrants around were single Whitethroat, Willow Warbler, Whimbrel and Grey Plover while 2 Sedge Warblers were singing.

I stopped in at Chevington briefly at lunchtime for a chat with ADMc. A Reed Warbler was singing from the depths of the phragmites bed, 6+ Swifts fed with 150+ assorted hirundines of three species and 20 Sandwich Terns and a Common Tern were resting on the spit. When I was here, news of the Wryneck above came on the pager. Later in the afternoon I popped down to Newton hoping to see this, my favourite, bird. I met up with Les, Richard and Graham who were also looking for it but we were too late. It had disappeared over to the scrub at the back of the pond never to be seen again.

Today was overcast with heavy showers, cool with an ESE 4 increasing to 6.
I went to Boulmer fired up in the hope of a repeat Wryneck performance or maybe something similar. A walk from the village, south to Seaton Point, taking in some farmland hedgerows was mostly uneventful other than 1 female Whinchat, 1 Yellow Wagtail, 14 singing Sedgies ( a substantial increase since yesterday), 1 Whitethroat, 2 female Wheatears, 1 female White Wagtail, 1 Tree Sparrow, 2 pairs plus a single Grey Partridge, 1 pair plus a single Lapwing and 14 Turnstones.

A seawatch from the north seat was much more interesting with 1 summer plumaged Black throated Diver N, a frenzy of feeding birds not too far offshore had 1 Roseate Tern, 2 fs Little Gulls and 30 -40 Arctic and Common Terns plus a few Sandwich Terns, 1 Whimbrel, 3 Manx Shearwaters and 5 Swifts all N.

The weather stopped any attempts at photography.
Posted by Stewart at 7:52 pm