The return of the Mollymawk...

Dear reader, you might recall that last July we paid a visit to RSPB Bempton Cliffs near Filey to see the Black browed Albatross that spent the summer there. Unfortunately for us it was away that day leaving us to stand for 11 hours albatross-less.

Being a reluctant twitcher at best, although the bird returned to the great white cape and lived there on and off til September, I couldn't face the thought of another journey ending in a blank. A bit like the bad luck that befell the Ancient Mariner in the Samuel Taylor Coleridge poem I was doomed to failure.

Still, that autumn I had hopes that it would return to its favoured face in 2022 when, if I had recovered from defeat, then I would pull out all stops to see it.

Zip forward several months to earlier this week, much earlier than anticipated, the Albatross had returned to its cliff.

Time to get get back on the horse so to speak...


We arrived in the car park around 08.30 on a lovely bright, calm and cold morning. A short walk to the cliffs where some birders had gathered.
'Any news?' I asked. 'Its flown out to sea earlier' was the response.
You would think the clouds had closed above us. Gutted. Another long day lay ahead...
Or did it?
Heads down we strolled down to wards the view point. About half a mile offshore I could see some Gannets circling and landing on the sea so I thought Id scan with the bins. Straight away, there was the big stiff winged cross shape of the Black browed Albatross!  In a bit of a panic to get John on to it before it headed for the horizon some garbled directions such as 'There! There!' were given. It seemed to work as John quickly got on to it.
We need not have worried. The bird casually flew back in to the cliffs where it gave some great views flying around the Gannet colony for the next 45 minutes or so before retiring to rest on the cliff out of sight. We tried again after breakfast but it was a no show. A few birders arrived later and did not see it at all.  We knew how it felt.
Still, nothing could top the views we had. Our day was already made... 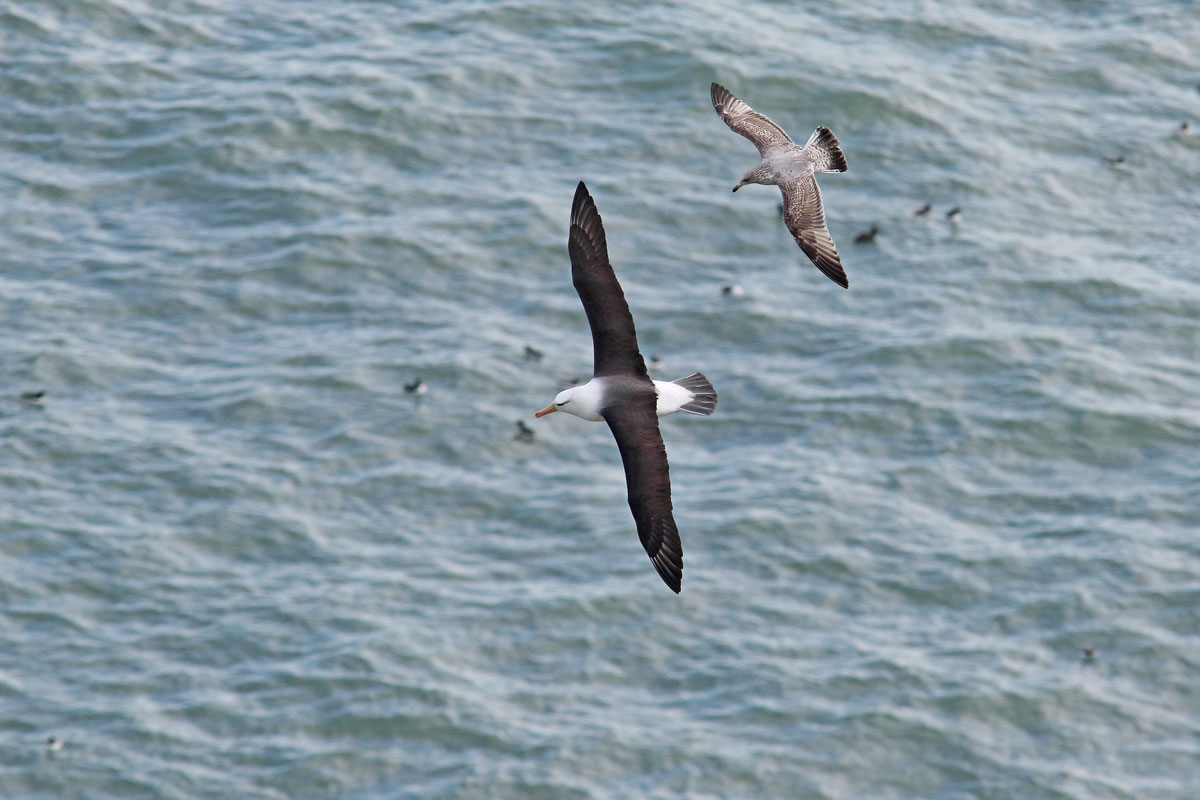 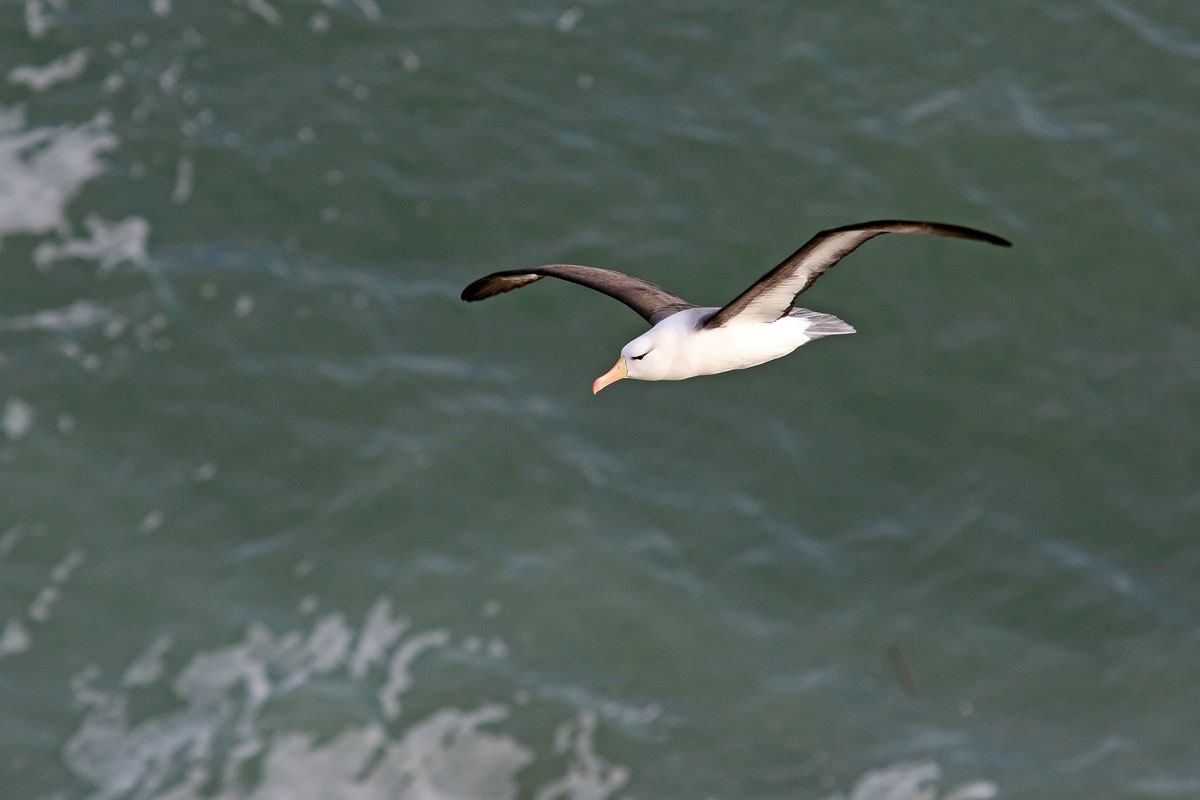 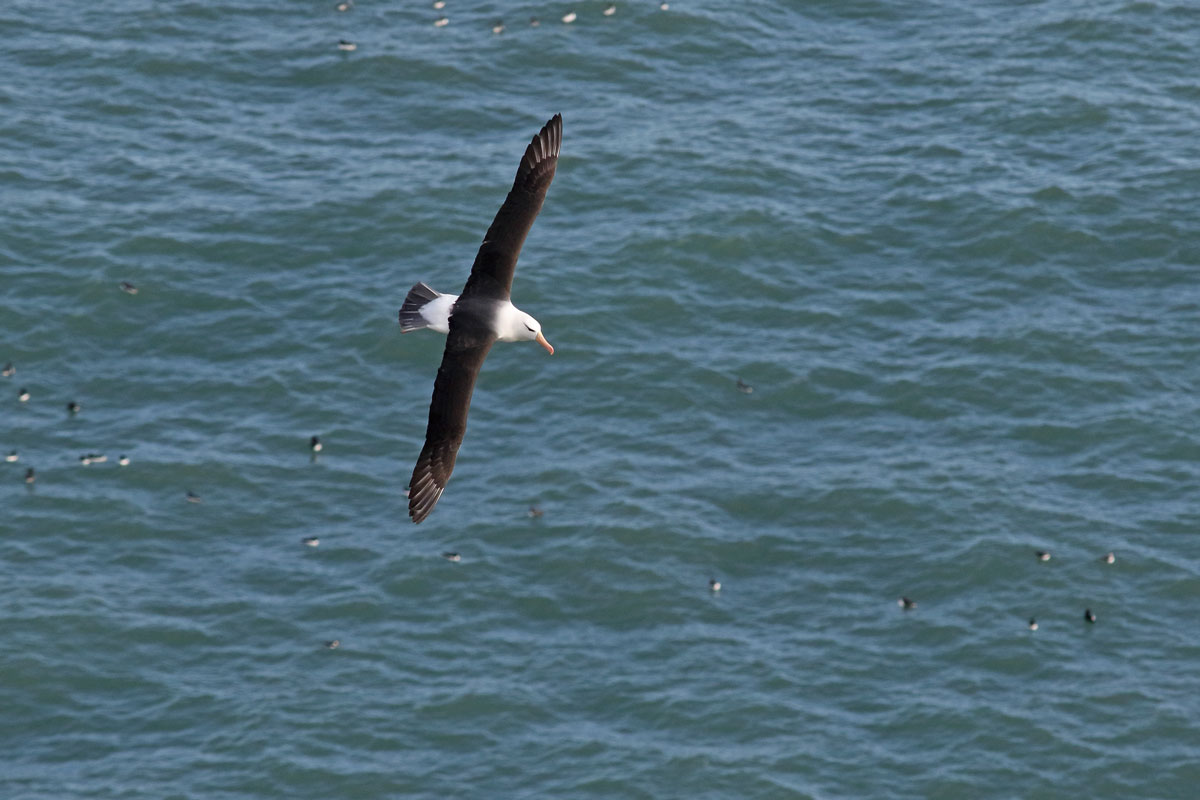 [ PS. Mollymawk is the name for the group of medium sized albatrosses such as Black browed, an American term I think?]

Glad you got it. I went twice locally for a an overwintering ring ousel and didn't get it and like you baulked at a third trip unable to face the disappointment. Never did get it and it has now moved on.

According to Wikipedia: The word mollymawk, which dates to the late 17th century, comes from the Dutch mallemok, which means mal – foolish and mok – gull.[2] Another etymology suggests that it comes from the German Mallemugge, a term used originally for midges or flies that whirled about lights.[3]
As it is a southern group of species, I suspect its origins may lie somewhere in the southern hemisphere - possibly South Africa. But that is speculation.

Hi Derek, thanks for the comment. I dont mind going to see things locally, its the waste of a day sitting in the car for 3 hours each way that does me in..I always think my time and resources can be better spent, but once in a while something special tempts me away....

Hi Ken, Thanks for the comment. Thats interesting, thanks, I did wonder about it being maybe a South American , South African or Australian term, after all, these birds do roam those oceans more than ours...

Great you connected on the second attempt! Happy daze!

Col, Have you seen one on a seawatch? You must stand a better chance than most....

Haven't had the pleasure of seeing one on a seawatch yet! There's a tale from Cape Clear of a birder seeing one on the water halfway out along the path to the seawatch spot. Another birder asked him if he'd got anything but when he replied "black-browed albatross" the birder assumed he was joking and carried on walking out to the point!

I did successfully twitch the Hermaness one in 1994 when I was living in Aberdeen - think that was its last season up there, from memory.

Can you imagine walking past one! ;)