Last week we finally got away for a week up in Scotland. After our June week in Suffolk was cancelled due to the plague we were thinking this might be a year without any getaways at all, so it was good to finally pack the car and head north.

As usual we headed up to the Ardnamurchan area where we stayed in a large, new house near Resipole on the side of Loch Sunart. The location was really nice, on a small promontory out into the loch with access over our own bridge across the burn. At home we live in a small old cottage with a tiny galley kitchen so narrow that I can touch both sides easily in an arm span so this house took a bit of getting used to. It had 4 sets of patio doors to two big decked areas plus two other standard doors as access. It took ages to lock up and turn off all the lights at night!  We tend not to look at the size of the place providing it is in a good location with a nice garden to sit ( and moth trap) in . Unfortunately this year my Robinson Trap chose the Friday night before we left on Saturday morning to pack in. I didn't have time to check it over so that was the trapping stopped.

I hope you aren't expecting a huge list of exciting wildlife finds with photos at this stage because to be honest it was a very quiet week with little of note seen. I think this was mainly because apart from one day of glorious sunshine the weather was wet and windy most days where we had to get out in gaps between showers.

But, never fear readers, I don't sit around off work all week seeing no wildlife at all. Although this weeks list would have been minimal, there were some stars of the show. Before I mention them, the also ran's were 1 White tailed Eagle that glided low right over the house one morning, 1 nice winter Black Guillemot off Kilchoan Pier and a Peregrine stooping on Rock Doves at Arisaig. The scenery was stunning and colourful too with Heather, Cross leaved Heath and masses of Devil's Bit Scabious in flower everywhere. 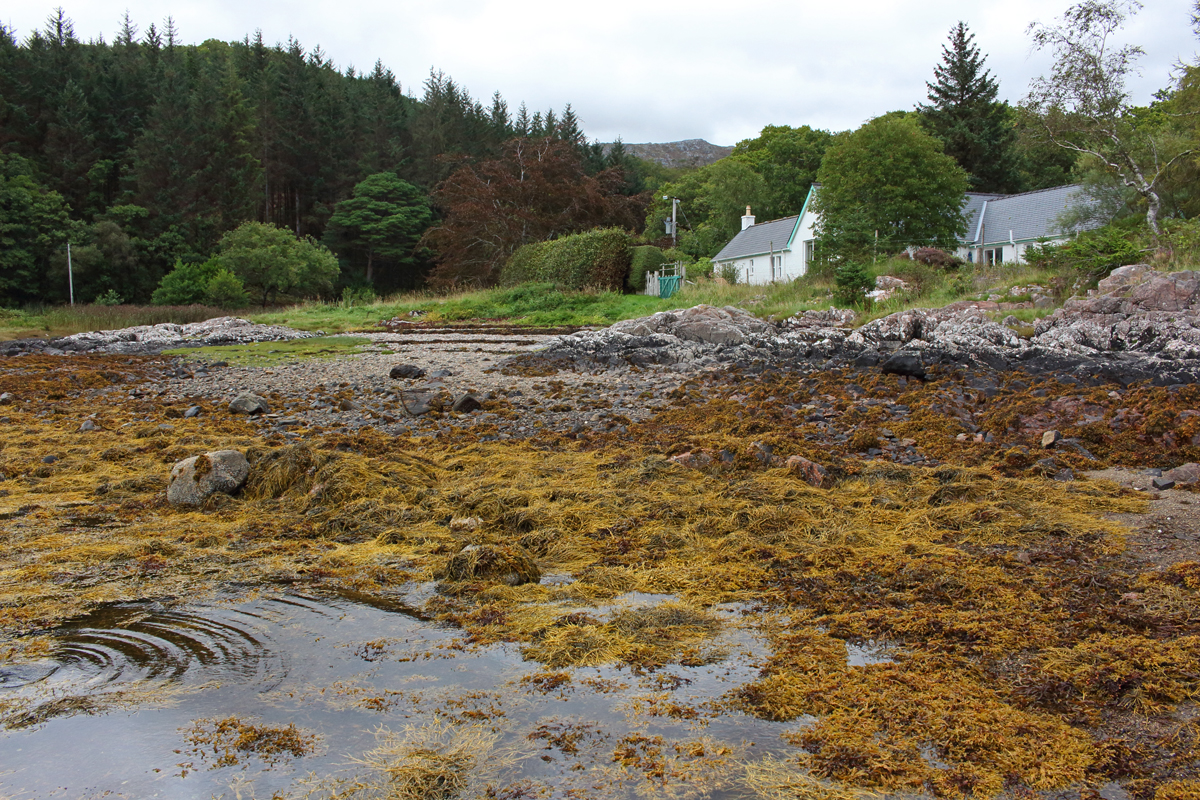 Now to the headline act. For me, up here, it has to be the finest land mammal we have in the UK, that I look for on each visit - the Pine Marten. We have been lucky over the years with some nice sightings of them but nothing prepared us for the show we would get this week.

First job after unpacking the car on Saturday evening was to get some bait out around the house to lure the sweet toothed mustelids in. I only put a few cubes of jam and bread around back and front on the decking and left it. Next morning a Robin was flicking the bread around with no sign of any mammalian visitors.

Sunday night. I mixed some peanuts, raisins and sunflower hearts into the jam and bread and dotted it in a few more places. On the bedroom window cill I dripped jam that ran down the painted stonework. I'll wipe it off in the morning I thought. Monday dawns and I get up early. There was no jammy bait at all and intriguingly, the jam run on the cill was gone too. A bird couldn't have done this, it had been licked off.

Right, now to up the anti. Monday. Bait was prepared and placed right below two outside wall lights that flood lit the decking, earlier, at about 8pm. We were watching a film after tea and I quietly popped into the room to have a look at 9pm. The food had gone! There was no movement outside, so I quietly slipped through patio door 1 ( the other three pairs were mostly left untouched)  and topped up the snacks and sat back. At about 10pm a lovely large male Pine Marten trotted up the deck in that snaky, lithe way that only a mustelid can do and began to eat. He wasn't bothered at all at our presence only a metre away behind the glass. He spent 40 minutes, leaving and returning and once even tried to get in the bathroom window.

On Thursday we put the bait out again and at 9pm not one big Pine Marten but two smaller ones came together to eat. It was pouring with rain and they got a soaking but kept dashing off to hide under the deck only to peep out over the top to see if the coast was clear and they would be back on the table top look for the sweets. I think they were siblings as they tumbled around each other even scent marking  each other.

At 6am on Wednesday we were woken by chattering and wickering Pine Martens still running around the decking but withing half an hour they had gone. What a great show they had put on.

On the Wednesday night the two girls came back together but seemed noisy and on edge looking out into the darkness and chattering. They ran under the decking and the big male appeared again, unfortunately for him they had eaten the food and saw him as an intruder and gave him short shrift, chasing him out of sight across the garden.

Thursday night was a repeat of the above and we left for home on Friday morning. Although not many birds were seen, the Martens were more than enough to keep us interested. If I was resident I would wean them onto more healthy food stuffs rather than jam, but needs must.

As an end note, the house cleaner told us to ensure the windows were all left nice and wide open to ventilate the propert when we left as a part of the COVID cleaning rules. Some gusts had not been opening them. So, as instructed the windows were pushed wide and we left. I know for a fact if they werent closed on Friday night, those cheeky monekys will have gone into the house to look for their missing supper! 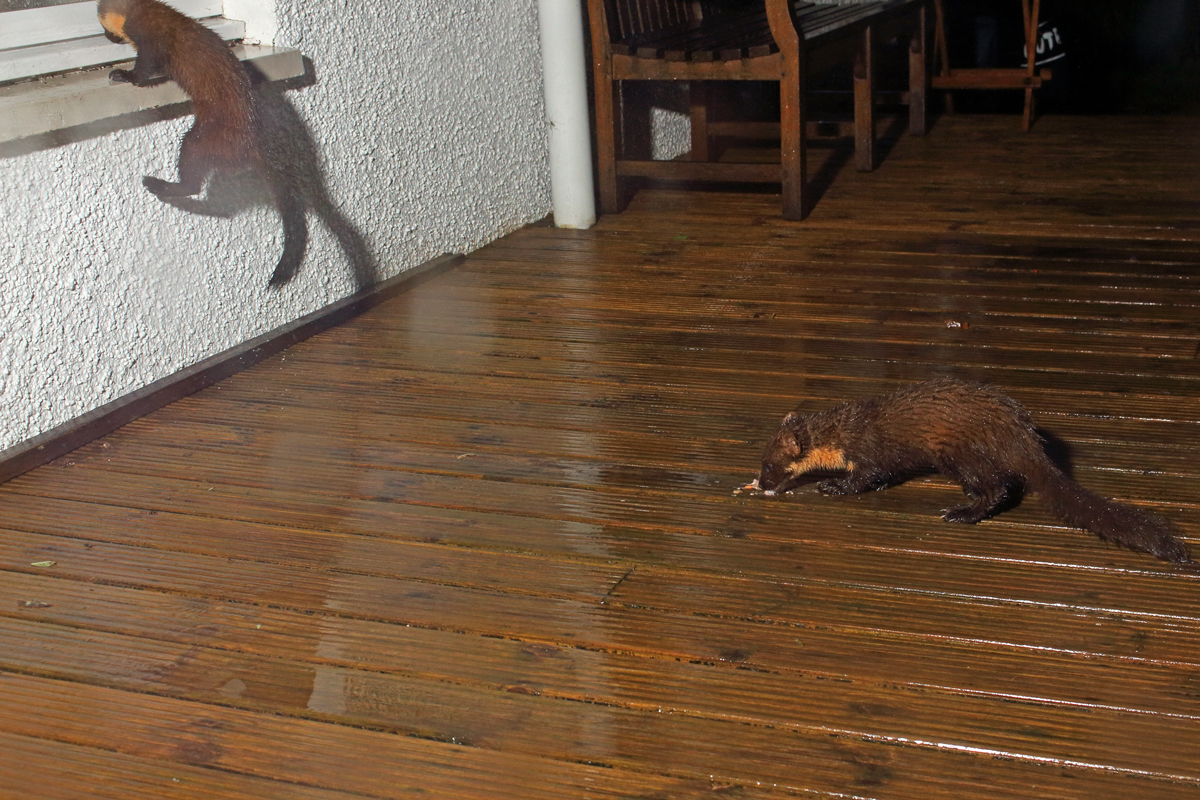 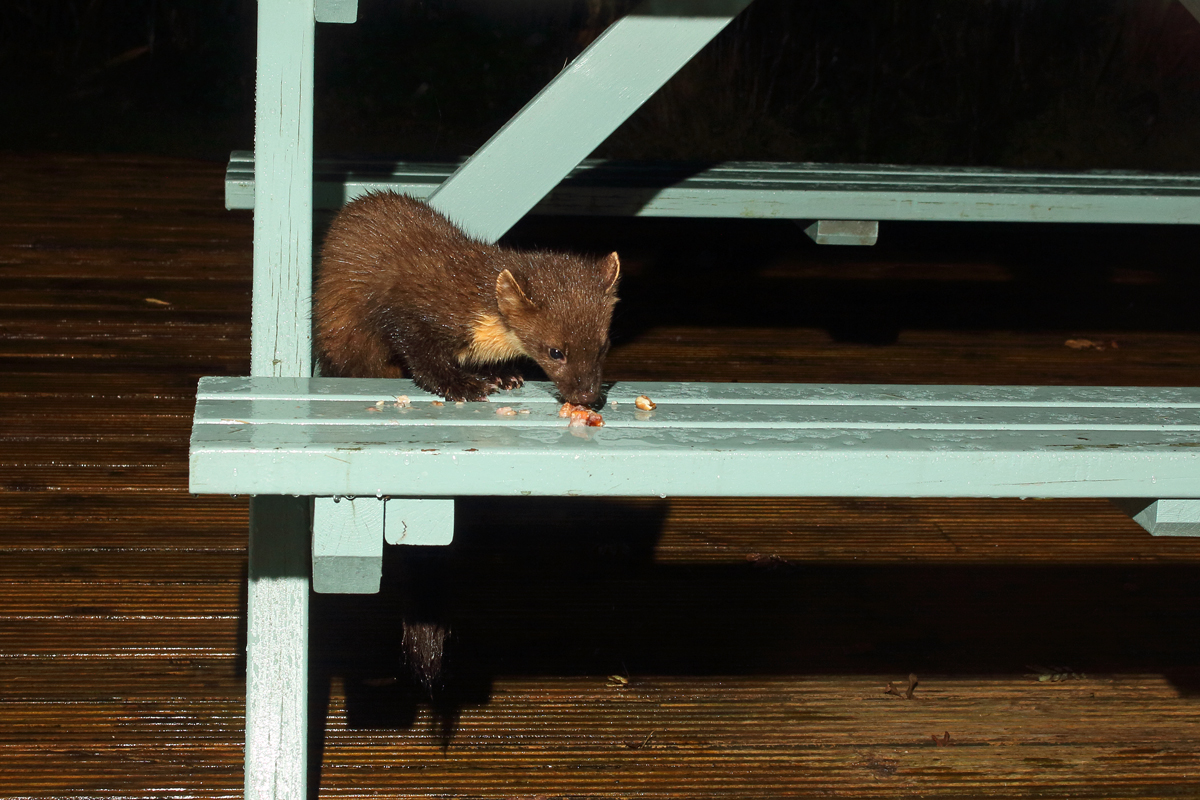 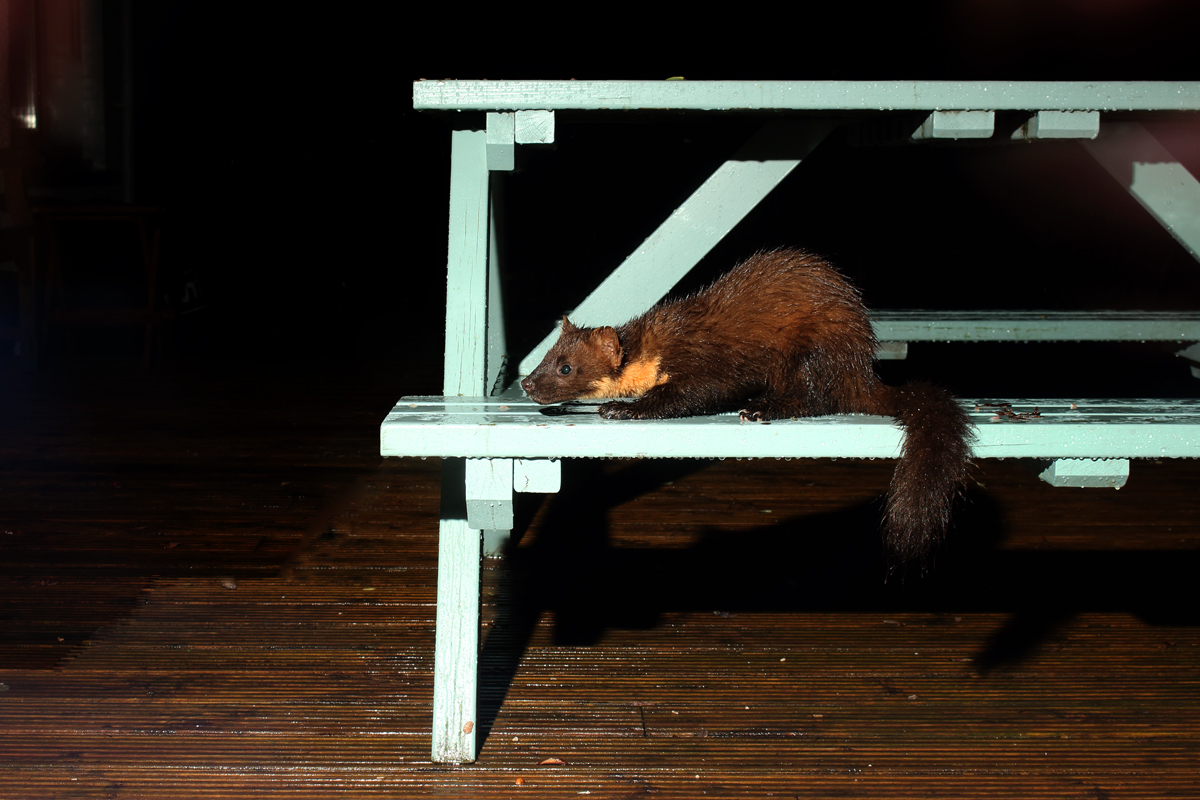 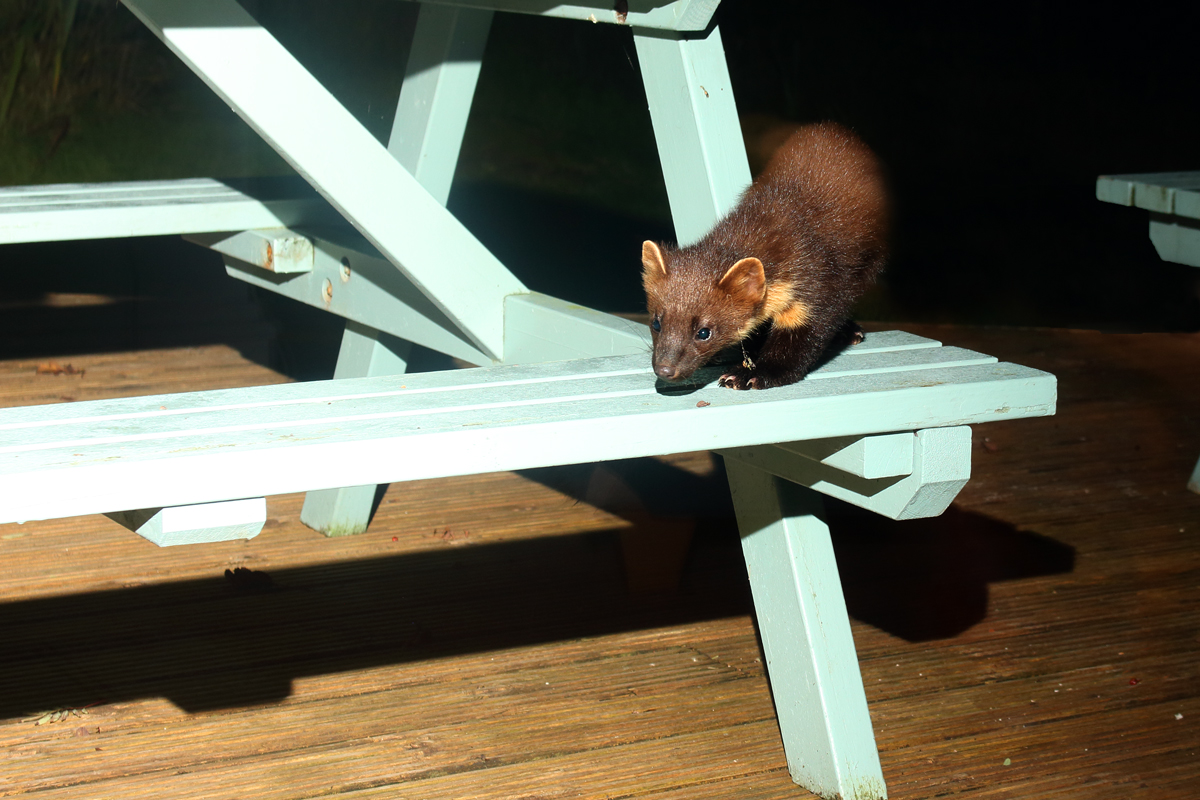 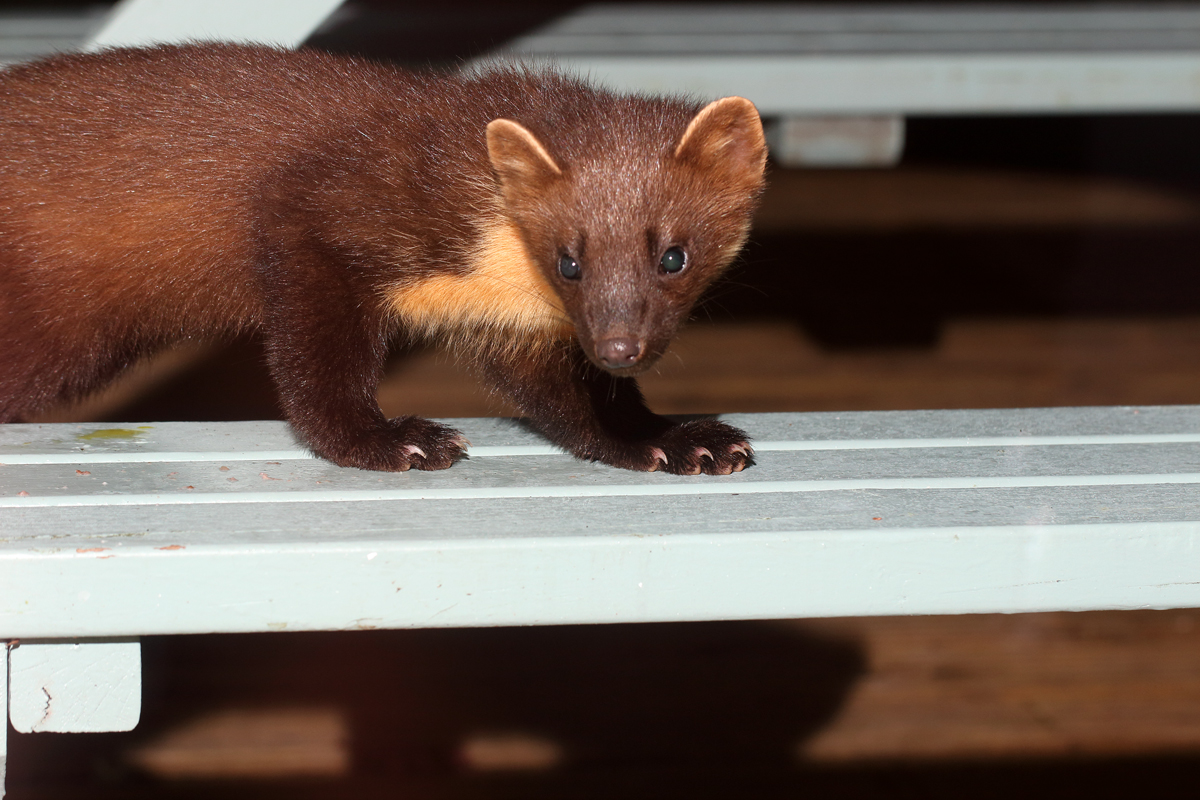 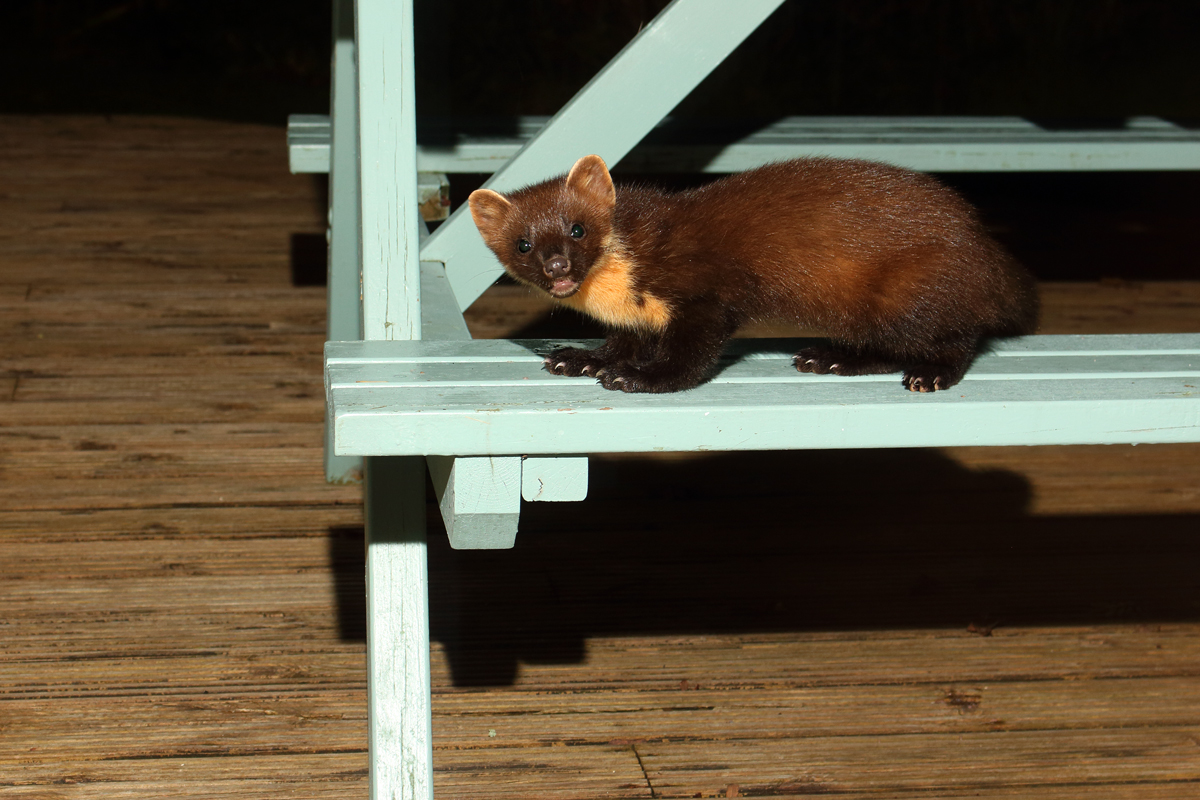 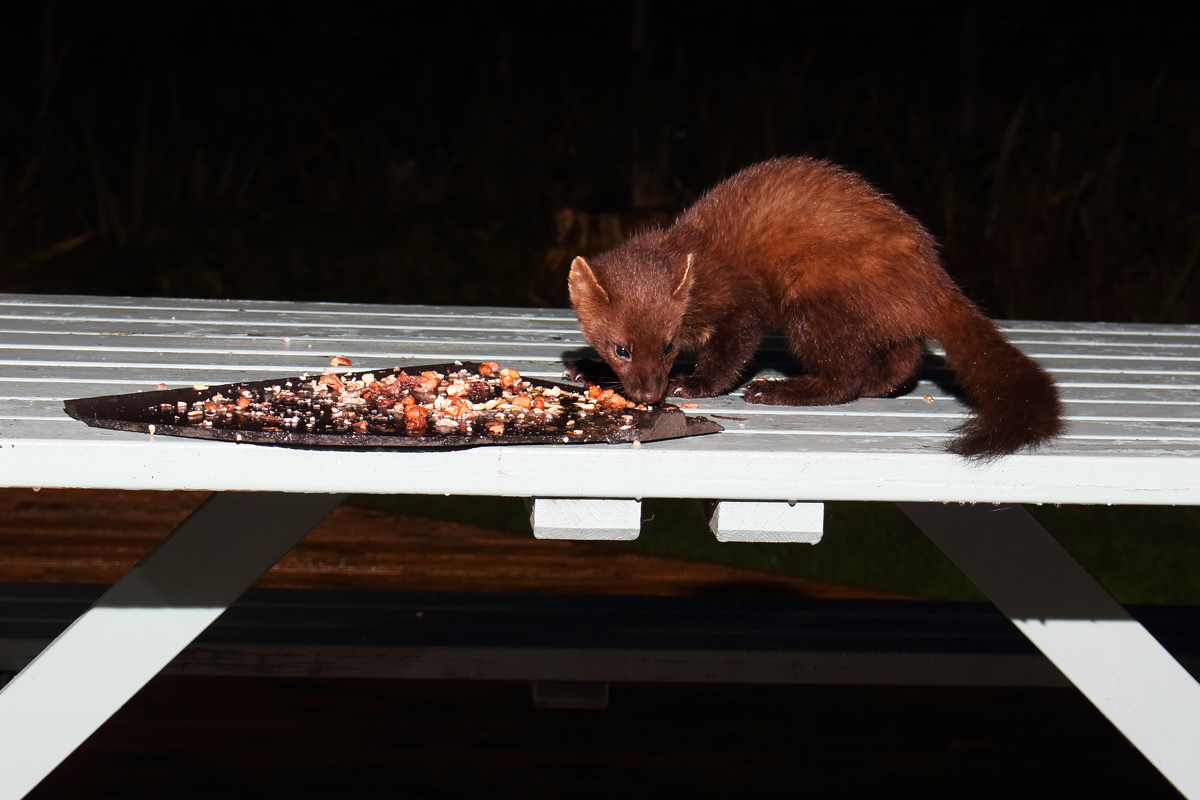 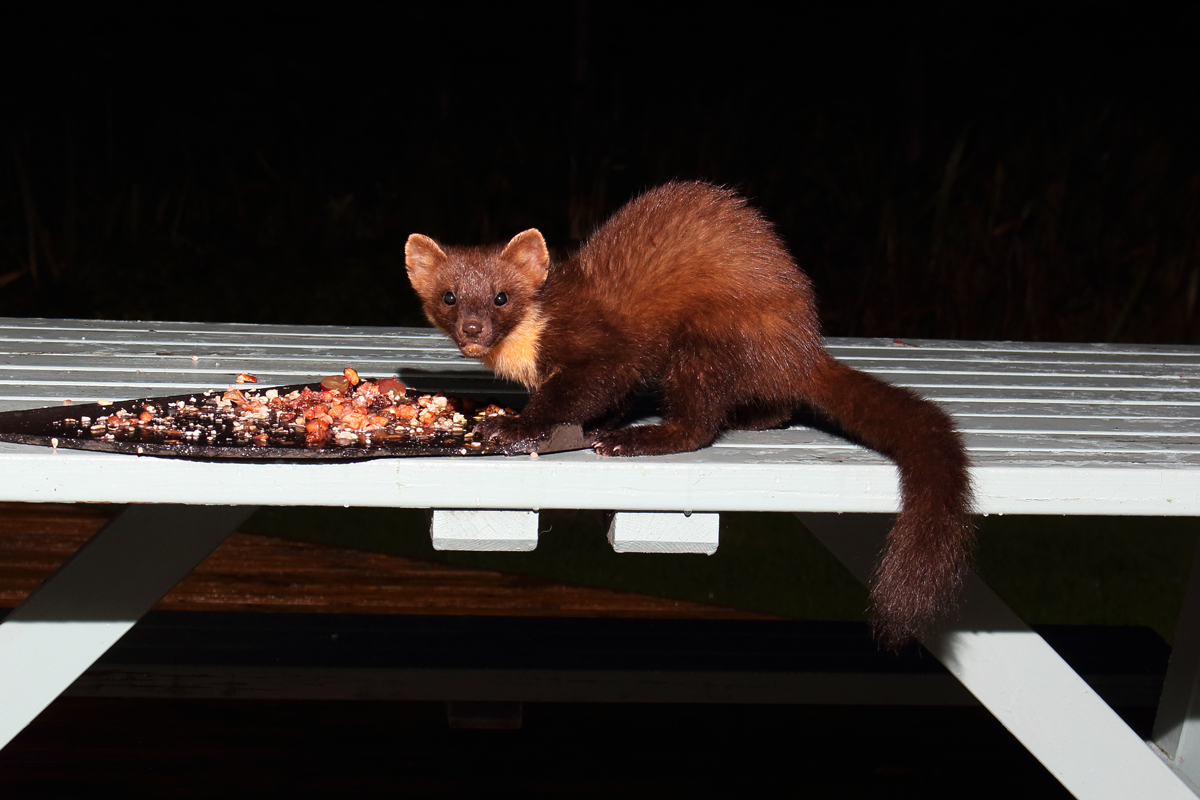 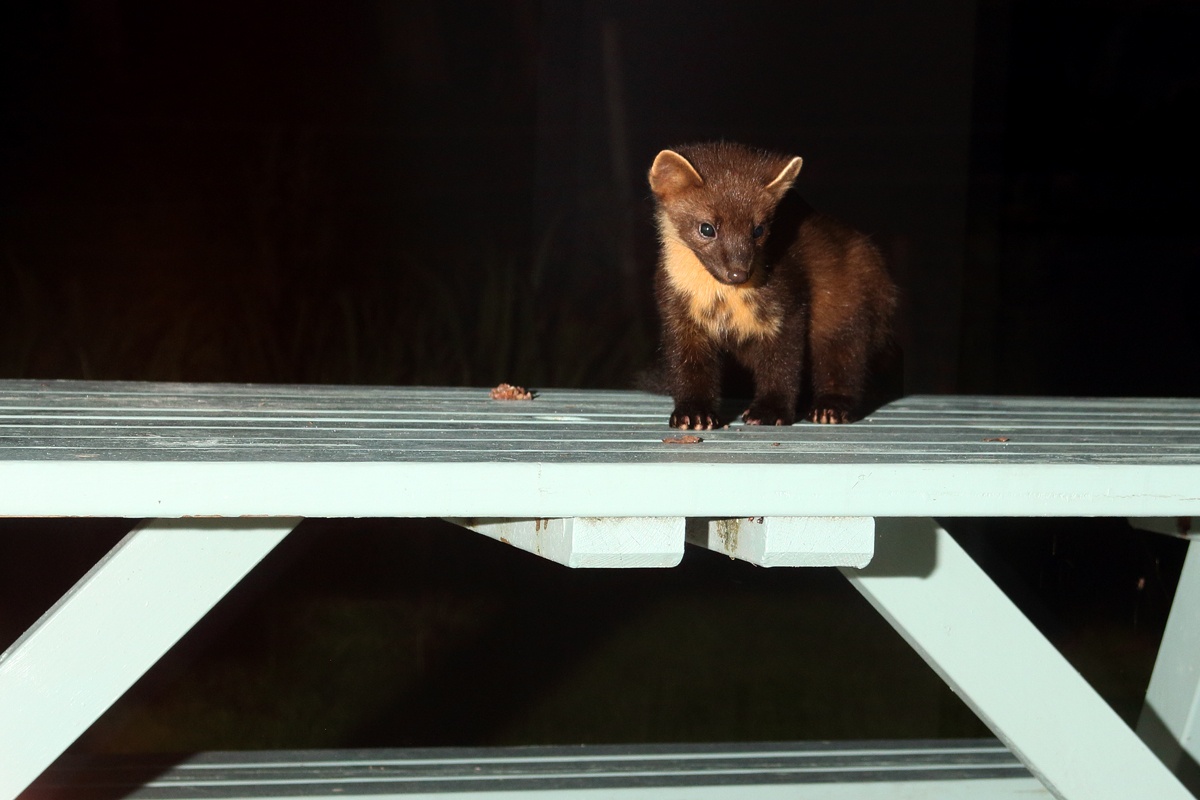 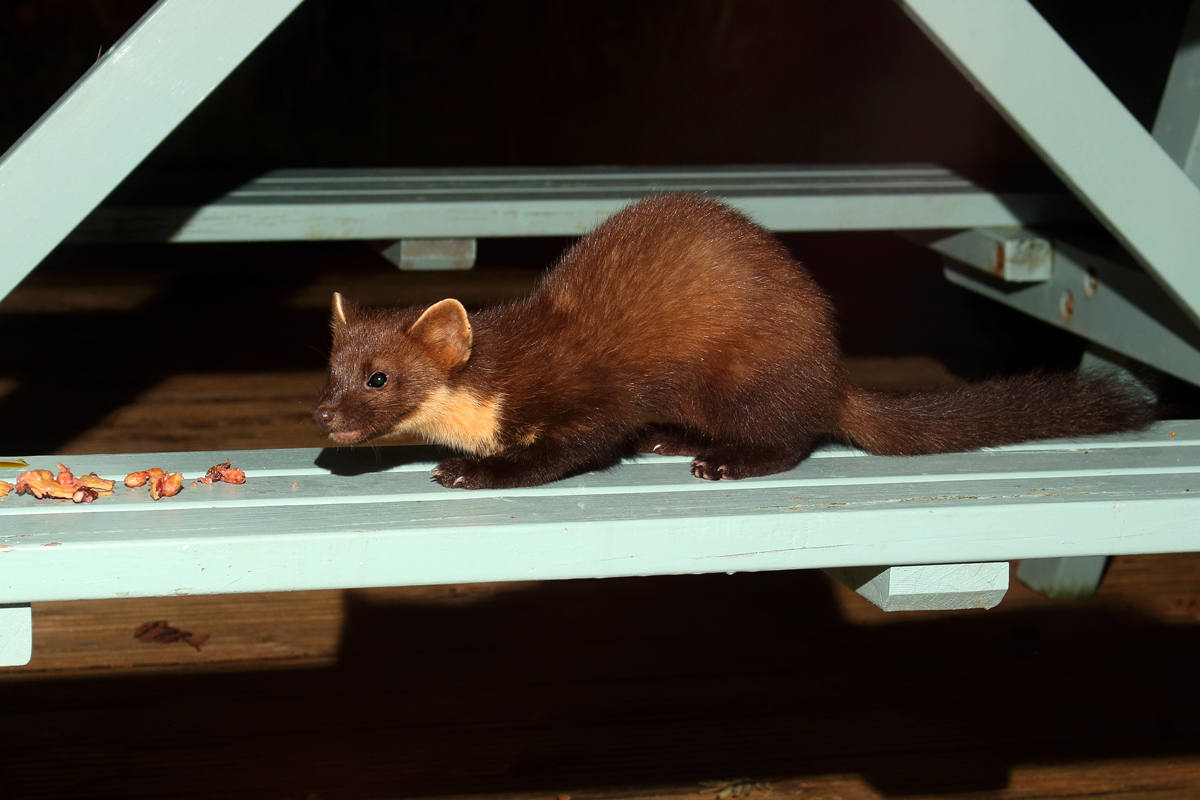 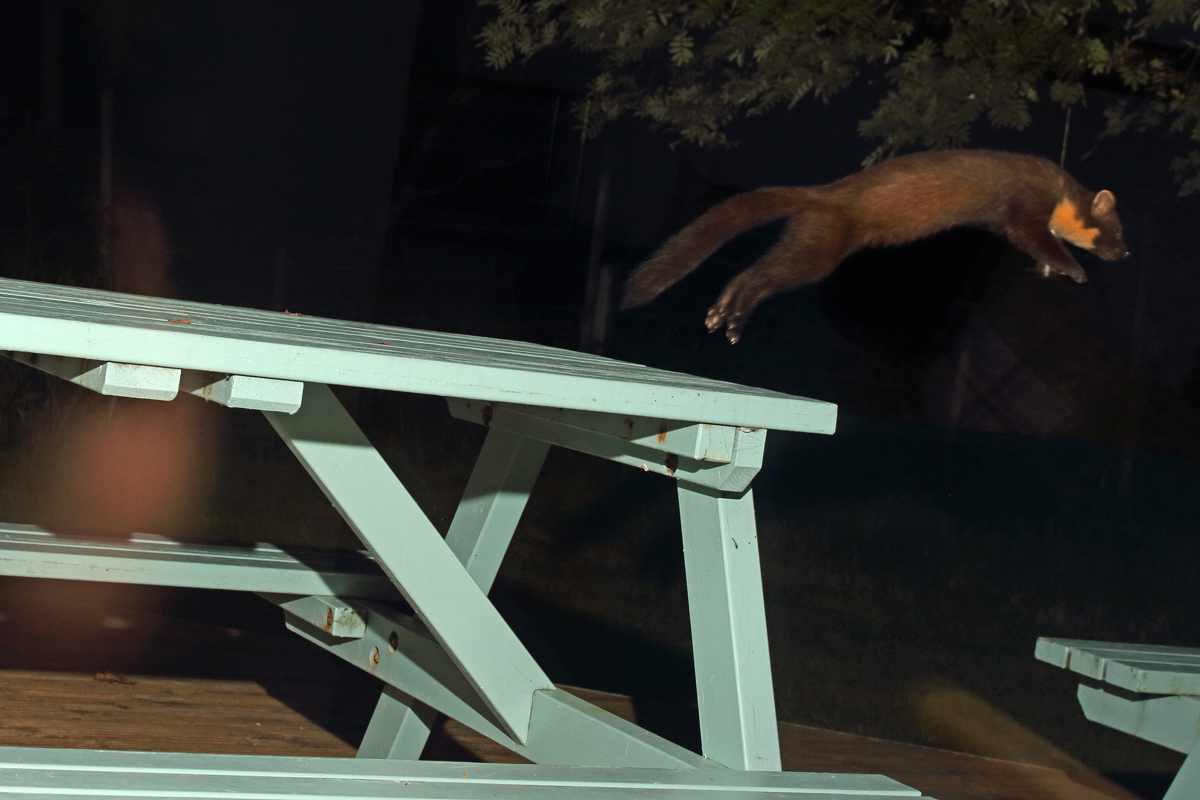 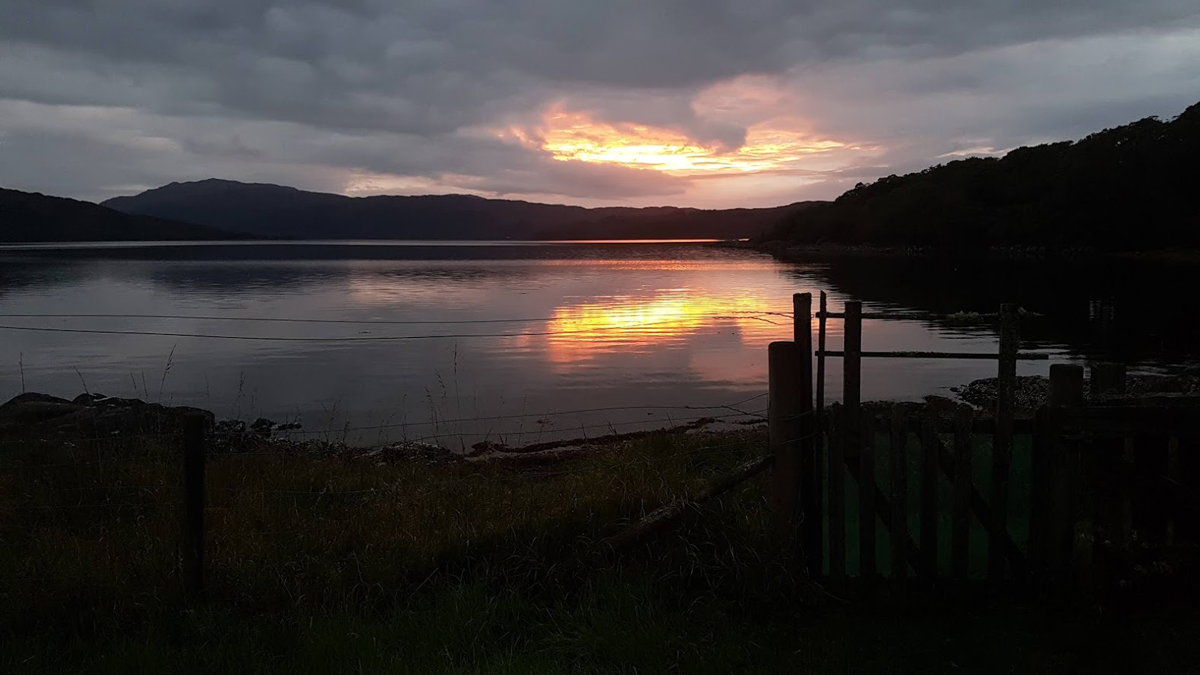 Your second to last pic, that's pure class that is! I saw my first Pine Marten on Ardnamurchan, though I baited mine with co-op super salad plus banana chunks (coz jam is just so passé. Plus I didn't have any with me...) Fantastic part of the world, glad you had fun between the rain.

Cheers Seth, it was a challenge getting pics with flash through double glazing!

We found it quiet too, Mull was good but otherwise the area was quiet. Very few invertebrates, passerines, mammals... dead jealous of pine martens though.

The area is better in June Iain, with some good butterflies like Chequered Skipper and moths like Argent and Sable plus short nights and dryer weather. All you need to the Martens is a cottage with a garden near some woods or craggy hills. They'll be there...