Well you couldn't make this up. Yesterday and today I have had a stinking head cold ( no, not the CV) with a snotty nose, runny eyes and a headache. If I hadn't been working from home I think I would have called in a very rare sick day, but as I spend the day on my computer in the bedroom, I just decided to sit it out.

I glance out of the window occasionally and pop the dog for a walk but other than that, there isn't much doing and on the bird front, the last few days have been dire.

Until this afternoon. The phone rang and as I answered, one of our neighbours, Julie was a bit out of breath and in a state of unrest...now Julie is a birder. Not a twitcher but she has always birded locally and does WeBs counts etc and certainly knows her stuff. She rang me once with news of a Turtle Dove in our Village Hall car park while I was on Holy Island searching for migrants. I have still not had Turtle Dove on my patch. So this call pricked up my ears.

'Stewart, there's a Golden Eagle over your house now!' 'I saw it getting mobbed by four Buzzards, great views!'

I dashed to the back window for a look, nothing.  I hung up on her, put my shoes on and ventured on to the drive. There was a still eerie silence with garden birds doing those small thin 'seeep' calls when hiding... after half an hour still nothing.

Then, it happened. I looked up to a great dark shadow low overhead. It was like one of the wraiths from Lord of the Rings only 50 feet up. An adult, raggy arsed Eagle glided, never flapping, low west towards Howick Hall and out of sight behind the small hill with pines on top. Luckily I managed to rattle off some photos as it passed...

I shouted to Jane who was working in our loft, that I had seen the Eagle but it looked like a White-tailed not Golden, but a few things didnt ring true. This is where confusion reigned..

A few moths ago a Golden Eagle was seen near Longhoughton which is 2 miles from us and again at Thropton about 20 miles west. I believe that bird was an immature with white in the wings and tail , so this is a different all dark bird. What is going on here I don't know. I couldn't see any jesses or tags or even an ariel ?

Looking at my images below the bird seems to have a long neck, secondaries pinched in at the base and narrower wings. Because of this I put the word out that it was a Golden Eagle, but something niggled.

Social Media in some cases can be a fantastic thing and this time it came to my aid in several ways. On Twitter, a Police officer contacted me to say my bird was 'Beaky C11' A Golden Eagle released in the southern borders in 2018 and he was satellite tracked. Detail would be sent to me in due course. Eventually it turned out not to be the errant 'Beaky'.

While this was going on, some eminent birders were chattering that the bird was a standard immature White tailed Eagle, maybe a second year bird as it was quite dark. Looking. First off with this assertion was Alex Lees who tagged in Paul French. Then a few others chipped in. Our very own Alan Tilmouth messaged to say he believed  it was an imm WTE too. Then Bryan Reins who lives on Mull and a few others all convinced of the birds identity.

So where had I gone wrong with this usually straight forward pair? First of all context. We are hardly knee deep in  Aquilas on the coast of Northumberland but I am familiar with both species. Of course, this habitat is more WTE than GE but who knows what happens with birds from reintroduction schemes, of which both species can be a part of.

I also had taken the seed of Golden Eagle sown at the start that should have been questioned more.

Still I was lucky enough to see it and get some passable record shots that helped in its eventual identification, and as Martin Garner would say, 'We are always learning' . On the plus side of this, not only is White tailed Eagle a mega garden tick it is also a claw back from several others on to my county list, so everyone's a winner!

White tailed Eagle goes on my garden list at Number 131 and is the first good bird I've had here in yonks, so I'm glad to have it! It almost beats the Rosefinch in to top place! 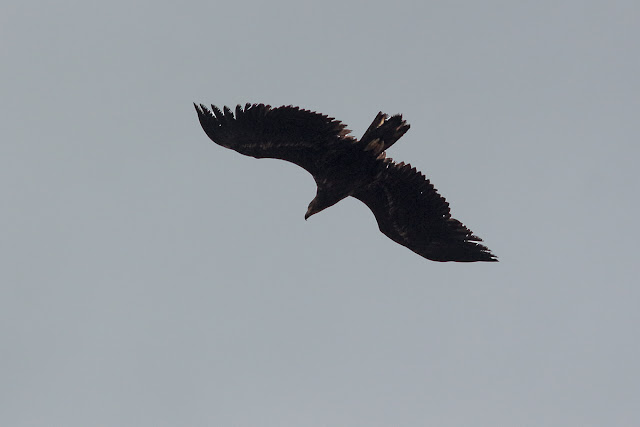 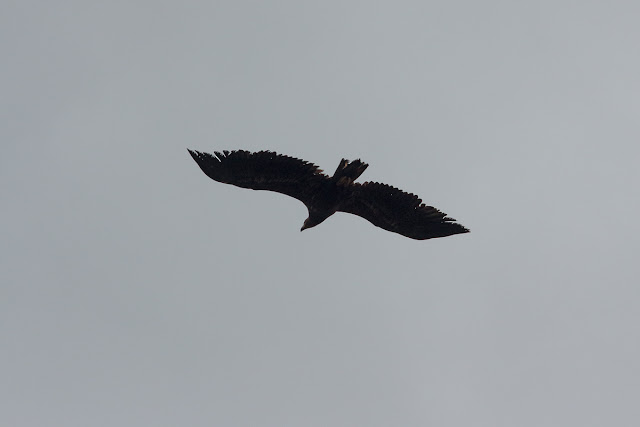 Seth - Im sure youll get one before I get another, its like you getting a Nuthatch!