On Tuesday we were lucky enough to have another glitch in the weather making the charts look particularly conducive to some patch seawatching again. This month has produced some decent spells of weather for being perched on a cliff top looking east.

The morning was cool with a moderate NE to E 4. There were some cloudy spells and a few light showers just enough to irritate.

I was on my directors chair at Cullernose for 0815 and set up, in position by five minutes later. The sea looked good with decent visibility and no glare on the water that can be a pain for any east coast, first light, seawatching aficionado.

Birds were constantly on show as they dashed past in a northerly direction. The movement was mainly wildfowl but there were plenty of Gannets, Kittiwakes in tight bands and larger Auks. The notebook page soon began to fill up.

It was at about 0845 that I had a real premonition. I was comfortable in my seat. The rain had passed, the sky was grey as was the water but it had begun to brighten up. I began a pan with the scope. Seawatching for those who don't know consists of a pattern of scans with the telescope or bins sometimes when the glass is pointed around the North East line then is slowly moved south into the on coming birds until you get as far south as possible. This is then repeated for the duration.

Don't get seawatching confused with looking at the sea. Its not that. You can stand on a sand dune or pier with scope at full height just looking around the waves for birds on the water. Things such as seaduck, divers and grebes are located like this all year round.

No, seawatching is the long game. You are waiting for birds to come to you that were not there when you arrived. They were miles away, in flight. To do this you must be sat down in relative comfort for at least an hour, often much longer. I can remember being sat at Newbiggin, in August, back in the day with more clothes on than I could carry. Sitting still for hours in a northerly, even in summer, is a chilling affair. Three hours had flown past and some birders would arrive. They would be wearing trainers, shorts and a T shirt. Scopes at full height. In our books would be 100 Sooty Shearwaters, a few Poms or a Long tailed Skua maybe. glancing at the new company we just knew they would be there no more than 20 minutes and away because it was getting chilly. No birds seen.

Anyway, I digress, at 0845, during a slow pan south, the waves looked a lovely smooth grey colour and I thought, if I keep my observations to a reasonable range, this looks ideal to pick out a petrel passing. Petrels are rare birds here and it is a red letter day if you strike lucky. Leach's Petrel in particular is always my elusive goal. I'd only seen two in the last 30 years, and only one in Northumberland despite countless hours looking.

My scope was coming around to a SE direction when it appeared. A tiny flicker of black above the wave then nothing. Had I really seen something? Or was it an eye floater? Oh no, I paused and out it came, a delightfullly graceful LEACH'S PETREL!

It hung, momentarily, on horizontal wings, did a few flickering wing beats like a little tern, flipped sideways, sheared around flapped again, dancing over the waves. Occasionally I could glimpse a white rump, not as extensive as British Storm Petrel and overall the bird appeared sooty black. As the hazy sun popped out the upperwing seemed more grey with dark primaries, then in dull light it looked all black again. As it came to its closest, it was powered past by a Guillemot, and a few Gannets. It couldnt care less, and continued on its path north, watched all the way until at the last minute it dipped into a wave trough and I couldnt see it again. 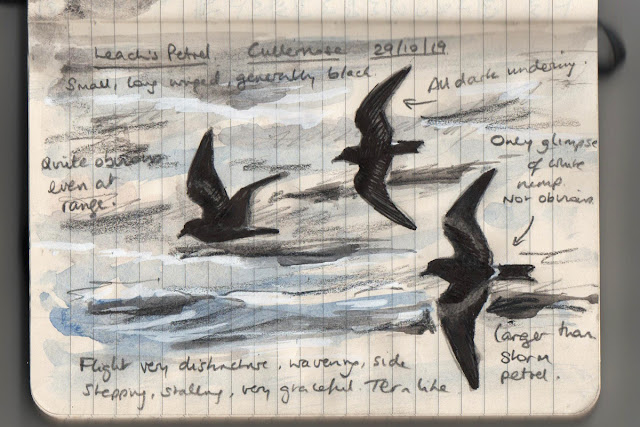 Well, what a great little bird.  A real ocean wanderer and a first for me on the patch. It is the second record here after Ben Steele had one last autumn.

After this excitement I relaxed into more standard fare, the full list below...

At 11.20, 3 hrs after starting, passage rapidly died off with only an odd auk passing.

Great account, Stewart. What a prize!
Scaup is the species I've never seen locally. Leach's only once (2 birds) - unless you count one in a box - and Long-tailed Duck only once.

Cheers Gavin, up here Leach's is a true rarity while Long tailed Skua, Little Auks etc are expected every year. Great birds. Scaup on my patch is wholly reliant on northerlies or north easterlies in October. In other areas of the county they are found regularly on the coastal ponds rather than the sea, in Tufted Duck flocks...