Autumn 2018 is looking like becoming a classic for all the wrong reasons. You would have to look back 13 years since we had a September in Northumberland without a Yellow browed Warbler, but here we are into October with the clock still ticking or should that be, the west wind still blowing.

That would have been tolerable had there been an early autumn fall or two with Redstarts, Pied Flycatchers and Garden Warblers mixed with an odd Wryneck, Barred Warbler and Red backed Shrike, but even these have been relegated to rarity status this year. On my patch I've not had a single one. The best I could manage when it comes to drift migrants is a lone Whinchat in early August.

With all of this creating an atmosphere of futility, it was time to totally rethink our birding. Even the mothing is dying down for the season so no succour to be found here, so there was only on thing to do - go twitching. Hopefully that will give us the fix we are looking for.

On Sunday, with a mega seaduck and a couple of scarce southern padders an hour or two to the north, I met JWR at Homebase for a pre-dawn drive up the A1. Starting off at Barns Ness where both Woodchat Shrike and Rose coloured Starling had been present and showing well for a week or more and even up until 3pm on Saturday our hopes were high for a good day.

Soon, the best laid plans and all that began to shine through. The long stayers had only done an overnight bunk. The only thing of note seen in a couple of hours searching was a Merlin dashing over the headland.

The wind was increasing, so after breakfast at the car, we headed off on the 30 miles to Musselburgh sea wall for our headline act.

Success here was much more straight forward thanks to a huddle of twitchers a few hundred yards away hunched up over scopes all pointing in the same direction. This site is easy going, a long wide flat track behind a sea wall facing north onto good numbers of northern sea fowl. Today we had 70+ Velvet Scoter, 6+ Slavonian and 1 Great crested Grebe and a few Eiders, over flown by a Bonxie and 4 Sandwich Terns.

Our cryptic target lurking amongst the basically similar Velvets was an American White-winged Scoter. Fortunately it was one of the closest birds to the wall where all of the seperating features could be seen. This is maybe only the 4th UK record of the bird, recently given specific status rather than being a race of Velvet Scoter and very nice it was too with its lolly pink bill tip and white war paint eye makeup.

We were so pleased with the line up here, our previous dipping stop was all but forgotten. As for this Autumn? Well.... 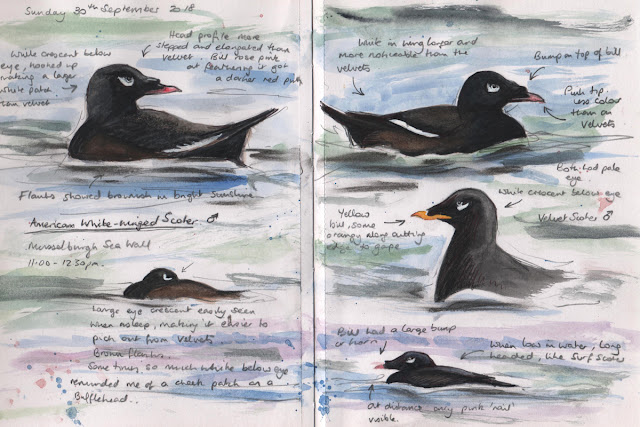 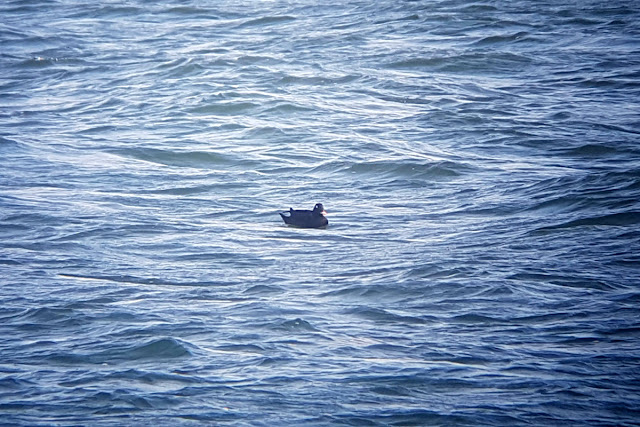 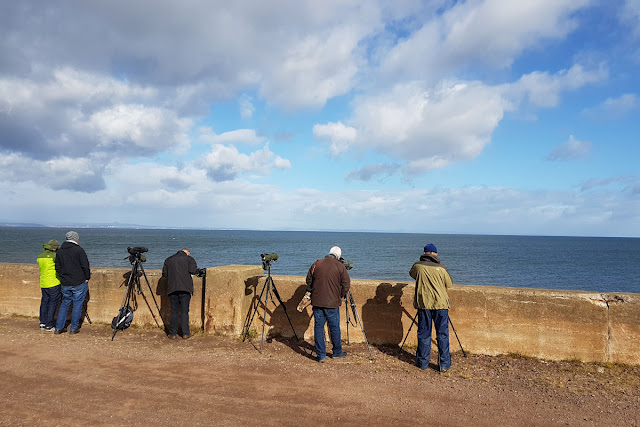 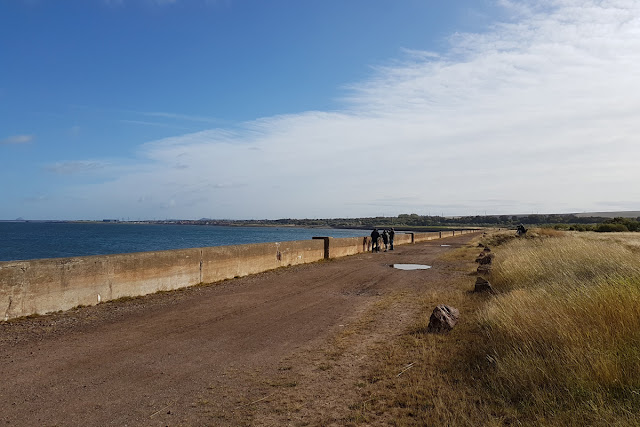