I cant remember the last time we had a Bank Holiday weekend with wall to wall sunshine for three days in a row. Long may it last I say.

The weekend started well, on Friday night with a trip to Alnwick Playhouse to see a Kate Bush tribute act called Cloudbusting . Now, I am not really a big Kate Bush fan, but it was a night out, so off we went. We weren't disappointed. What a singer this lady is! Anyway, I digress, if you fancy a listen, try YouTube....

Then it was an early start on Saturday morning as I was leading a Dawn Chorus walk around Howick Hall gardens from 5am - 7am. The tickets included breakfast in the Hall Tearooms. 32 people came and we enjoyed a lovely fine morning stroll listening to the birds.

Most sightings were of common birds you would expect to find in parkland / farmland but 2 Whitethroats were my first of the year.

Back home at 8am after getting paid ( a free breakfast) and it was off to bed for an hour to charge the batteries, not knowing what excitement was to follow...

At lunchtime, word appeared on our local WhatsApp bird group of a possible Squacco Heron up the coast at Waren Mill, near Bamburgh. Whilst Squacco is an excellent bird, I have seen a few over the years and wasn't going to face the bank holiday traffic for another, and wrote it off. Then the next message was a photo from the non-birding finder... a mass of tree cover above a stream, and there, in the far left corner was a tiny brown blob. I just had time to think, hold on, I cant see any white on it and it looked very small, when Alan Curry responded with 'Little Bittern!'

Its awful when this happens. Its Bank Holiday, you have jobs to do and family commitments and a UK and more importantly, a county tick turns up 15 miles away. There was nothing left to do except, throw the gear in the car and with gritted teeth join the tourist throng to Bamburgh. Adrenaline had kicked in making it all quite stressful ( why do we do it?) so I decided I wouldnt faff about with my camera, and just go for the sighting then straight home. What a bad decision that was! Note to self - always, yes ALWAYS, TAKE YOUR CAMERA.

When I arrived at the cottages along the Waren Burn, ADMc had the bird in his scope, sitting low in some ramsons above the burn. It sat for a while then turned and wandered out of sight into the vegetation, soon to reappear a few yards along on some open mud. From here it flew upstream a short way, out of sight. Its small size was very obvious when flying, it was like a moorhen or even smaller.

A change of view point was required so we walked to the next bridge along into the caravan site. After half an hour, it appeared as if out of nowhere, only 20 yards away on a branch over the burn. What views! Literally scope filling. It flew across the water and ran around like a huge footed Corncrake, coming even closer, before flying under the bridge and our feet and along into thicker cover under trees.

What a fantastic bird. If only I had brought my camera gear I would have gotten some great images in good sunny weather too. Chris Barlow got the best pics, see one here on Flickr.

I made do with a phone scoped shot for the record... 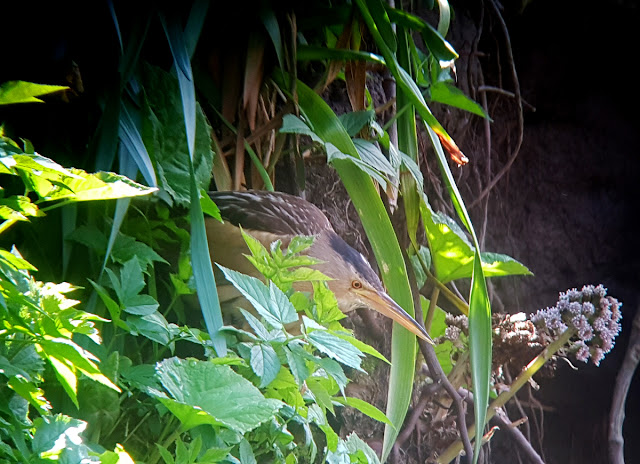 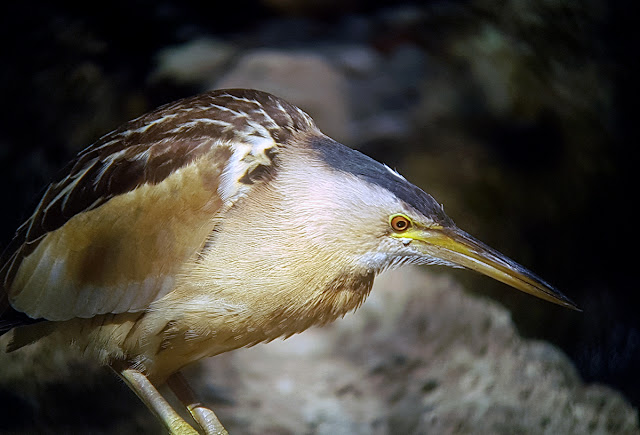 After dipping the Gosforth Park bird on 26th June 2014, I never expected to claw it back. This is only the second twitchable bird in the county and completes my set of herons on the Northumberland list.

Sunday was sunny and clear. I met John at Homebase, and as he could not get away yesterday, we headed up to Waren Mill for the Little Bittern. This time I had my camera. Unfortunately, the camera remained unused as our diminutive friend had departed. All we had of note were 2 Swifts and a Common Sandpiper on the burn.

We left, and headed up onto Alnwick Moor to look for Green Hairstreak and Emperor Moth. I had just bought a small pheremone lure to see if we could find Emperors on our local moors even though we have not seen them there before.

At site 1, I hung the lure out in a sunny spot and retired to the car for a cup of tea. I only had a sip, when the first male Emperor Moth flew in like  bullet to investigate, closely followed by a second.

After 15 mins, we had our target photographed so the lure was sealed away so as not to cause further distraction and we went to walk the moor for butterflies. At a site about 1km from the first I set the lure out again just to see if our first try had been a fluke. No, as before 2 male Emperors arrived within minutes allowing great views. It was now time to put the lure away for the day. I believe in using these sparingly to avoid disturbance, its a bit like tape luring.

As we walked back, John put up a Green Hairstreak, then another came in to spar with it on territory. This is a new site for us, so we were well pleased. There is a lot of good habitat here for them and we soon found another three giving good photo opportunities.

While we took photos,a nice Cuckoo flew in and landed on wires nearby. 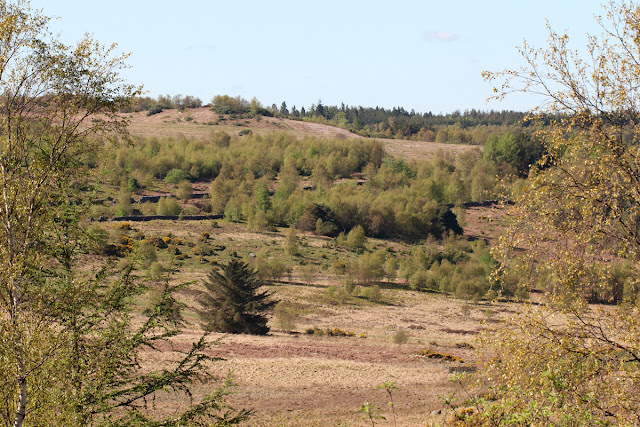 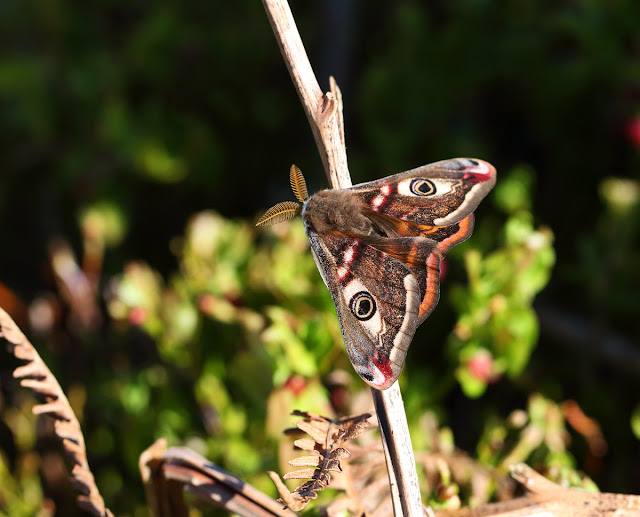 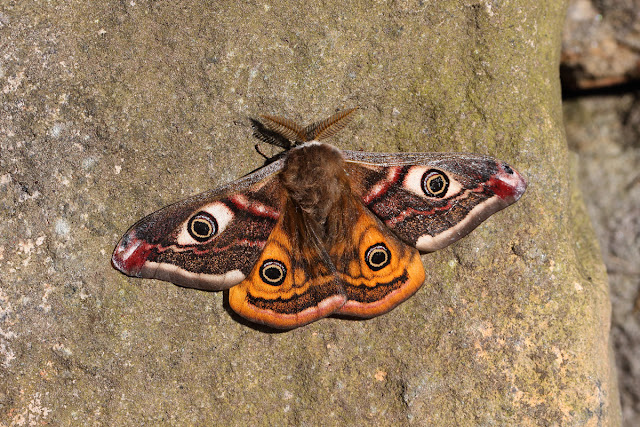 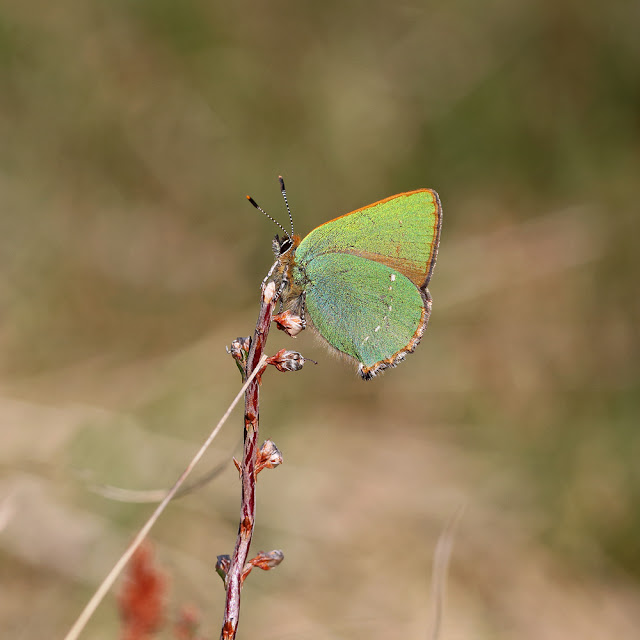 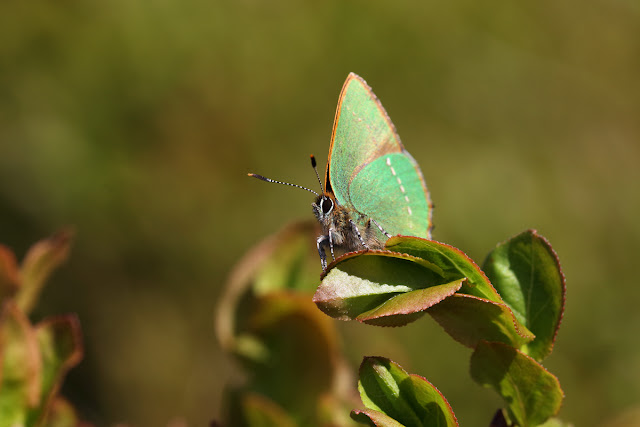 Bank Holiday Monday was the same regarding weather, though a touch cooler on the coast. Jane, Peggy and I headed off inland, west of Alnwick where it was 20 degrees compared to 14 on the coast. We checked a couple of different sites for Emperors, finding up to 6 at one site and a single at another, all the while being serenaded by Curlews, Skylarks and Meadow Pipits with a few Redpolls and Cuckoos thrown in.

A brief stop at Calally failed in seeing Birds Nest Orchid but did find Redstart, Tree Pipit and another Cuckoo, rounding off an excellent weekend.