This morning was spent down at Warkworth with John.

We started in the gloaming with a nice Barn Owl hunting the car park. I had seen a second bird up the road near Hipsburn on my way too.

While there, it would have been rude not to have a third look at the Coues's Arctic Redpoll at Birling ( which is just one field from Warkworth Golf Club). How pleased am I that John wanted to give it another go, because today it gave us some great views. Early on, we were the first ones looking, and sure enough the little flock of Redpolls were feeding in the usual spot down at the SE corner of the field. Using a little field craft, we stood on the field edge near the fence, with the light behind us. I took my scope but didnt think the light was any good for photos, a mistake I won't be making again in a hurry.

As we stood quietly, the birds arrived from the south just over our heads chattering away to themselves before dropping in to feed only a few yards from us! Despite quartering the ground with the scope we could only find three birds, a Mealy and 2 Lesser Redpolls. As is their way, they got up again, danced around a bit and dropped back in. On one occasion though, when they got up, they all landed on the fence line only about 30 feet away where they could be seen very well indeed through the scope. 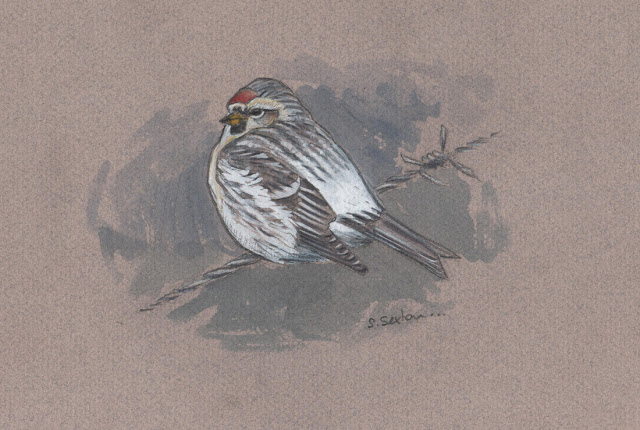 A rapid count gave us about 26 birds - 1 Arctic, 2 Mealies and 23 Lesser Redpolls, but they dont sit around and off they went across the field into the hawthorns, where we could clearly seen the Arctic and 3 Mealies! So a finally best guess gives us 1 Arctic, 3 Mealies and 22 Lessers. A while later we managed to get more good views in the beach car park as they flew in for a wash and brush up. This time I suspect there were even more Mealies, but an accurate count was impossible as they hopped through thick thorn cover.

I think John got some shots of the flock on the fence, so when he sends me one I'll add it to the post ....

On our way back to the car, a male Merlin hunted a Skylark over head, frightening the poor thing into song, though I didnt see any kill right till both were out of sight high over the sea.

Back home, a second Chiffchaff was feeding in the ditch along the lane, while the first one was still in the garden.... 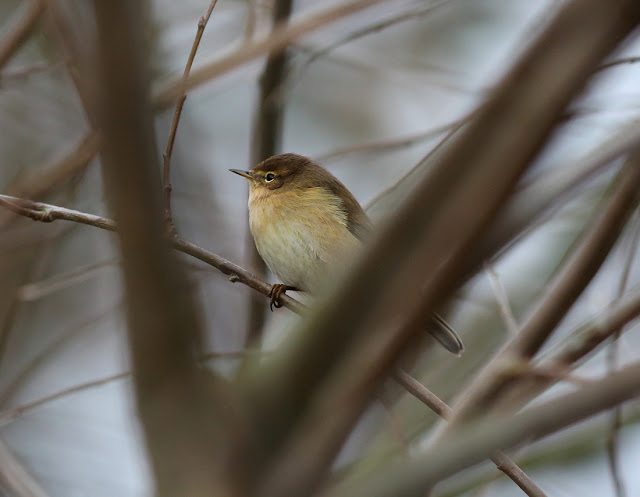