Despite the steady north easterly breeze and the fact that Norfolk is grid locked with rare sibes we still managed to get out this morning and find little in the way of 'good' birds. John  and myself covered the whole of Warkworth North Side - Birling area but it was rather quiet. Still, after a dull start, the day turned out to be very pleasant with some nice autumn sunshine.

As there were no birds, our attentions drifted elsewhere. In the dunes, this Red legged Shield bug  Spiked Shieldbug ( thanks to Graeme Lyons...)was doing something despicable to a small caterpillar. The photo has come out quite well with the 300 lens. 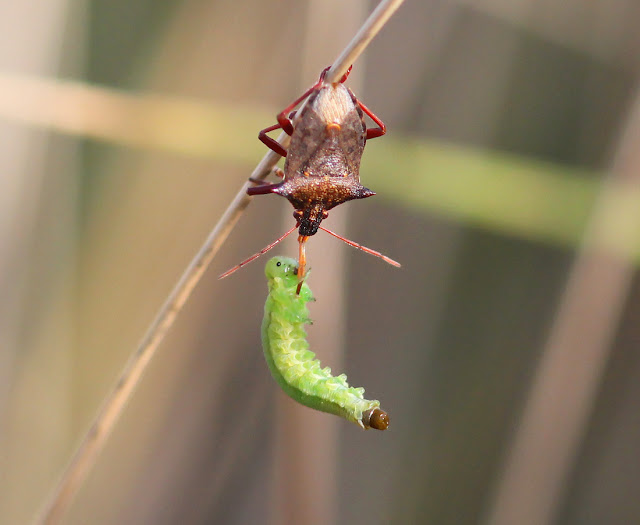 Up at the car park, the wildlife took on a 'big game' feel when we were disturbed from our morning cuppa by some distressed squealing in the picnic area. Now, in a car park like this, that could have been anything, but this time it was a seriously myxied rabbit doing its best to avoid being eaten by a young Stoat. After some 'Benny Hill style' chasing around and wrestling, the Stoat ran off and the Rabbit left by another exit. I bet the Stoat tracks it down again later...

So, with all this carnage around, I was pleased to get back home to do the moths...Lately rather than just trying some voucher shots on slate, I have been trying to show some off on some nice surfaces...

Yes we said that Warren, pity the stoat didnt kill and eat it...

Thanks for that Graeme, I was being lazy and making assumptions without checking....its a lifer for me too!

Great shots of the stoat and rabbit encounter Stewart.