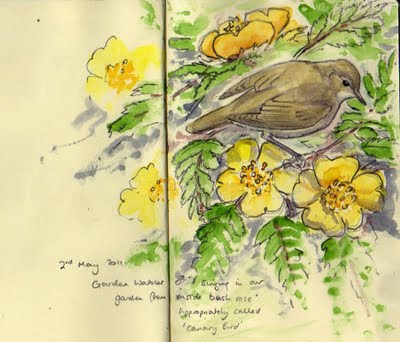 This morning while I fed the birds a 'blackcap' was singing from the copse nearby. As I dished the seed out it was apparent that the song was coming from a tall shrub rose in our garden so I waited a short while for the bird to show. It was a surprise when the 'blackcap' emerged and was a Garden Warbler! Now I know these two have similar songs but I have them sussed, you know, the short, more melodic, Blackcap ending in the usual flurry of notes, while Garden Warbler is more prolonged with a hint of mimicry in there. Obviously this one didn't know the rules.

It sang on and off while clambering about various shrubs for a spell but I didnt see it again after mid morning. Maybe this is a new arrival using a shorter sub-song until it gets on breeding territory where it can settle in to a more usual vocal rendition... oh, and the shrub rose? It is a variety appropriately named 'Canary Bird'.

At the village road end, a large female Greenland Wheatear hopped about the sheep cropped turf  catching unseen prey in the grass.

On 'the drive of activity' a Red Admiral was a new arrival.

7.30pm Update - Just walked Bunty along the lane, when a single Waxwing flew over head, calling, then landed briefly in the garden of the Old Rectory before being chased off north by a Starling. My latest one by a mile, but outside here tonight is cold enough to be November...
Posted by Stewart at 5:48 pm

Hi Stewart, the same thing happened to me recently. I was working one of my coastal patches and heard a Blackcap sinigng; jotted it down in my notebook and then it moved into view and turned into a Garden Warbler. And I too have them sussed, so I was mightily confused!

I'll give the druridge 'blackcap' a thorough grilling tomorrow!