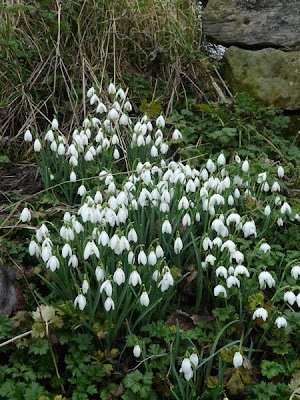 Above - Drifts of Snowdrops fill the woods at Howick Hall and there are odd small clumps at any bit of roadside...

A day off work today to wait for the kitchen delivery and an electrician.

While I waited I finished some wallpaper stripping then after the rain stopped did a bit of garden tidying. The new garden is much better than our current one. There is actually proper soil with worms in it as well as plants! Now, we have clay and hardcore in a nougat type consistency. I'll be able to do some planting again soon.

I had a visit from Nigel (Abbey Meadows) and the kids who were at a loose end on their school holidays. While we chatted, our attention was distracted by 3 Buzzards over the field behind the house as they 'mewed' and generally were belligerent with each other. 2 males and a female I think? The males squabbled as the female ran around like a pheasant looking for worms ( or moles) between the mole hills.

Two pairs of Mistle Thrushes were in dispute too, with one male doing a proper song flight over head. I cant recall ever seeing a thrush singing in flight for such a prolonged spell, it ws like a giant skylark in some ways...

Later on I walked Bunty over the fields up the hill called Hips Heugh where nice views over the farmland and sea can be had. We came back by the cliffs near Cullernose Point seing 35 Fulmars sat out on the grassy cliff ledges, while 40+ Curlews were feeding in the cliff top fields.

A pleasant day off work ... 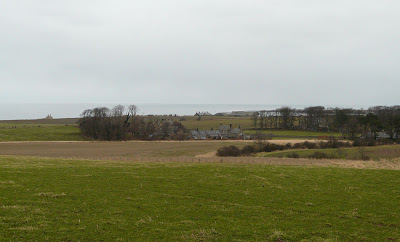 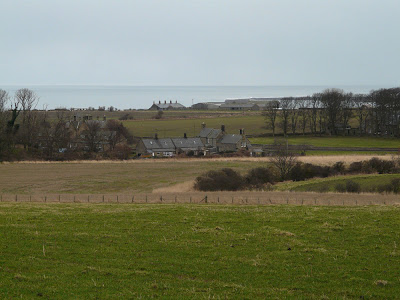 Above - The view to our house from Hips Heugh. You can see the sea and Longhoughton Steel in the background...
Posted by Stewart at 10:18 pm

"You can see the sea", presumably that's for all your landlocked visitors ;)

Is your seawatching boundry going to be the 3 miles or the international 12 miles out for Feas etc:, actually is there any good seawatch point ?
Brian

AT - My specialist subject o Mastermind is 'the blatantly obvious'...

NB - Yes, Newbiggin! Otherwise I'll make do with Cullernose I suppose ( theres a song there somewhere)...