I managed to escape Homebase for long enough today to help JWR do the WeBs count at Cresswell Pond this morning. There were loads of wildfowl, the best being 466 Wigeon, 86 Teal, 4 Pintail, 3 Red breasted Merganser, 2 Scaup and 122 Pinkfeet. Although there were 5 Goldeneye, I couldn't see enough difference to make a female into a Barrow's ( a possibility indicated earlier this week by someone). Not a claim I would like to make without point blank views despite having seen a some in Iceland a few years back...

On the way back north, a short stop had 2 adult Mediterranean Gulls on Amble Little Shore, behind the harbour. I had left the camera in the car, so this sketch gives an idea what they were like.

Finally, Homebase caught up with me, but not before I stopped at Denwick church to appreciate my first spring flowers of the year. I like Winter Aconites. They really brighten the day... 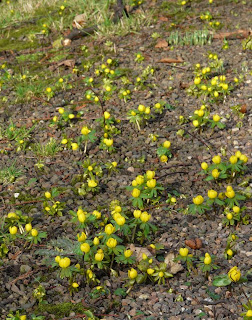 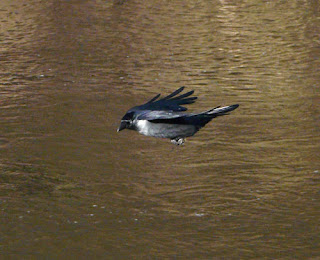 Same Med Gulls as last year perhaps, can't be too long before we get a breeding record. Is the Jackdaw a Viking?

Winter Aconite is on my want to see list, Stewart. I think the nearest ones to me are at Gib Point.

RV - Yes I think the Meds are the regulars. The Jackdaw wasn't wearing a horned helmet, does that matter?

WB - Yup it certainly does.

D - I'm not sure if any Winter Aconites can be considered wild, they are more naturalised. There are a few spots around here to see them, lovely in with Snowdrops, one of my favourite sights.

Aconites already - nice! I need to seey some snowdrops though..

There's a roundabout near me that has daffodils in flower every January and they're out now. In a couple of weeks the whole area will be yellow!

Lucky you to have spring flowers already. They're lovely.