I took a day off work today and headed the 70 miles, or so, south to see if I could catch up with the adult Glaucous-winged Gull in the Saltholme Pools area. ADMc and myself arrived at Saltholme at 10am, knowing that the bird had gone off the the tip to feed sometime earlier. Figuring we had some time to kill before it returned I suggested that it was time to get the flasks out. No sooner had I stepped from the car, the pager sprang to life with the news that the bird was showing at Dormans Pool half a mile along the road... 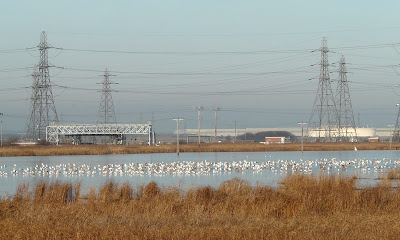 Above - The scenic splendour of a frozen Dormans Pool on Teesside.

Here we met up with Richard Dunn and we soon had the bird in our sights. It paraded around the ice for the next half hour before flying off back to the tip to feed. I didn't get any good pics this time as it kept dipping behind patches of reed.

We decided to wait for it to return, busying ourselves with an adult Glaucous Gull, below, a nice Short eared Owl and several Pintail 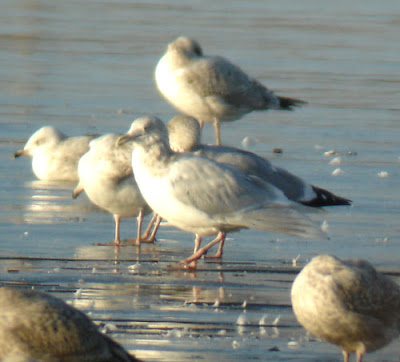 We waited until 3pm before Richard called that the bird had returned. By now we had been accompanied by Brian, Northumbrian Birding, Bullough and Janet Fairclough.
This time the Glaucous- winged Gull sat out in the open for all to see, though this time the low evening light made the primaries look darker than they really were. 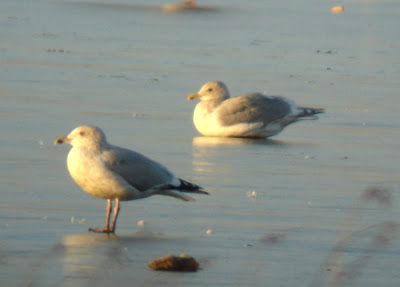 Above - Right, Glaucous-winged Gull lying out on the ice with a Herring Gull for comparison.

Below - A neater version of my field notes... 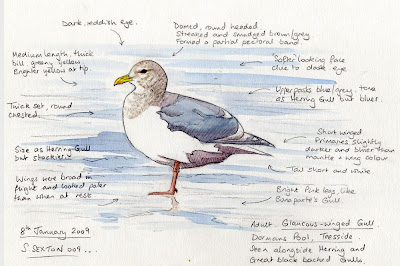 Thats that then, a good day all round. The GWG was the second for Britain after one trapped and ringed in Gloucestershire in 2007 and about the 4th for the WP. A nicer bird than I had envisaged...

PS - Richard Dunn shows how to take a picture of the GWG as it flew from the ice this morning - below... 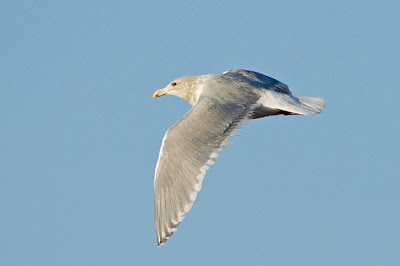 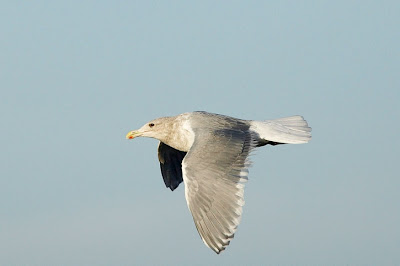 PPS - Remember, these pics aren't mine so please don't take without permission...
Posted by Stewart at 7:51 pm

i was down there today from 1 till it flew off arpund 15:45. all the birders panicked including me as a load of gulls flew off just as it was resighted on the ice but luckily the GWG decided to stay a little longer for some great views.
crackin bird!

Nice tick there Stew. In a month or so I wonder if it will make it's way north and visit Ashington tip for a few days and call in to Linton for a bath!

Like the sketch, what a totally differant bird in flight , cracking shots from RD.
Brian

Hi all,
RV - Yes when relaxed the bird had a nice domed egg shaped head, but it streamlined flat in flight...

I bet people look out for these in winter now...

good posting Stewart.... gulls remain a mystery to me, not sure why as they're a lot easier to see than some other birds... guess that's the reason, easily overlooked as a child for being common. I'm getting better, but still struggle, so your handy tips guide keeps me on my toes, and update my knowledge.