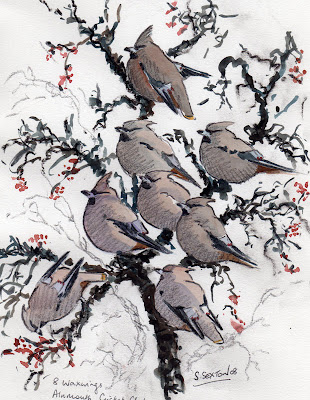 After last nights splendid Christmas do at Tom and Mu's I went to collect my car from outside theirs at about 9.30 this morning. I took Bunty and decided to give her a walk near the Alnmouth and Lesbury Cricket Club. As we were late to bed last night - this morning - I was a bit groggy and didn't attempt to take bins or camera, and was pleased that the wind was blowing the cobwebs away.

As we got out of the car, a Redwing flew overhead, calling, and I was deciding which direction to take when they shouted at me 'look here' in that elfin high pitched trill they always use. A glance right and there they were, 8 Waxwings in a twisted hawthorn only yards away.

Even though the light was hopeless giving them a dirty brown colour, their squat bodied crested shape was a welcoming sight. Not for long though, as this bush was apparently 'owned' by a large belligerent Mistle Thrush who was keen to protect his larder...
Posted by Stewart at 12:38 pm

(and if you could arrange for the Waxwings to follow me - I'd be ecstatic!)

Haven't seen any Waxwings down here in Dorset yet, but then again I'm not a supermarket user and I hear they like the car parks.
I just blogged about a bird I saw today while out dog walking that I thought was an Osprey but wondered if that's possible at this time of year....I read your blog and decided you must be the person to ask! Merry Christmas, Goosey

RV - Could be anywhere near you...
W - Ta....
T - I hope some make it to all of you...
G - I have heard of very late Osprey's Goosey, but not overwintering? I would look again for it if I were you. Its not impossible, with these newly reintroduced birds at Rutland who knows...
OC - Thanks, I might 'upgrade' the drawing to something a bit neater...

There's a touch of the Ennion in your artistic style Stewart!

Oh man Steve, if only. The man was a genius....Thanks very much anyway....