This week gets better... 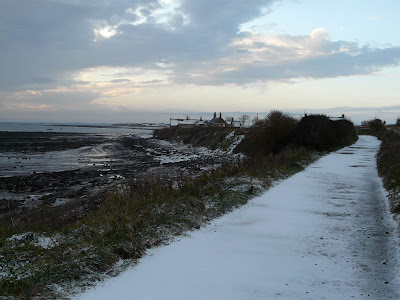 Out at 8am this morning. There had been another light covering of snow and the wind had swung to a W3.

As the weather was a little bit different to the norm I decided against doing an atlas tetrad in favour of a morning at Boulmer... 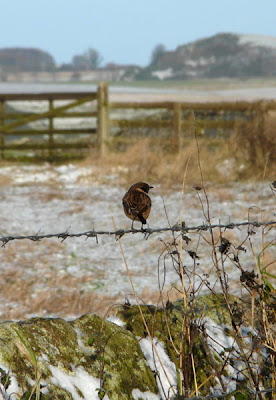 The walk north towards the Low Steads seemed very quiet, as if all of the birds had cleared off but I persevered. At the tip of the headland I was pleased to flush a Woodcock from under my feet, my only one this year. It circled around showing well against the snow then flew off high to the south. A pair of Stonechats fed from the track side, while 6 Skylarks flew south and another 13 circled the stubble field. 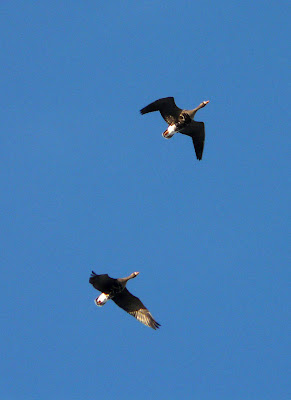 As I checked the cattle feed area for buntings etc a party of 14 Greylags came in off the sea and left to the west. Looking around, another two geese lifted from the field and began circling. I very nearly didn't give them binocular time, Pinkfeet, thinks I. As they did another lap, I put the bins on them as they were going away and saw massive black bars on the belly. Now that makes things alltogether different. There has never been a record of White fronted Goose on the patch and I was getting a rush! Sure enough they banked around showing the white blaze and I scrabbled for the camera to get this shot for posterity.

Back at the car in the village, a Merlin flew south over the haven and 9 Long tailed Tits came through the gardens. There was no sign of yesterday's Glauc though.


At lunchtime we took Bunty for a walk through the Howick grounds down past the small lake. Again, no sound of small birds until that very distinctive trill met my ears... 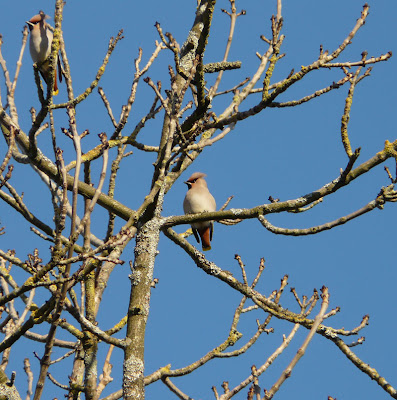 ... looking up, 18 Waxwings were singing and flycatching from the top of a tall ash tree. Nice to see they all haven't moved on. Later they were feeding on the berries of some ornamental rowan trees. On the way back a party of Snow Buntings were calling strongly over head and moving north but, unfortunately, I couldn't get on to them.

Another good day. I think next year I'll save some holidays for November, its better than October.

I agree BB - November is the "new" October. Quality birding for the past three weeks.

Its always a treat when a new patch tick turns up, nice one Stewart.
It's true down here as well, November has been outstanding

I took the Journo's down the long walk yesterday and didn't hear any waxers (ya spawny get!), looked for your glauc along the coast too, but no sign,had a nice peg come of cullernose point. One at Dru today took me to 160.

Nice pics of the whitefronts, looked wild too - unlike historical, some say mythical, geese you added to your hsitorical Dru list. :-))

I'm thinking of moving to Boulmer Stewart, I'd love a patch like yours. Would you and your villagers take kindly to a 'cockney' in their midst?

If you're making room for the Cockneys you have to let the Canucks come too! Spending time in Boulmer and the north-east was added to my things do list since I first found the BB blog. Great stuff Stewart.

Ipin take note of Susan's comment. She is being nice.

Thanks Susan you're welcome. If you do come on holiday let me know...

I try and check the blogs everyday if I have the time but I missed these two posts. Great photography Stew. Linton's birds are making their way slowly north!