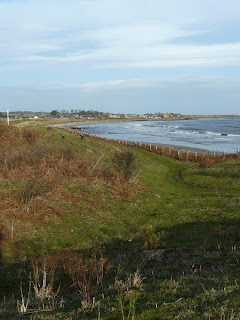 I took a holiday today to dog-sit. After Bunty's walk, the weather looked quite good so I thought this would be a chance to try again on the Seaton Point atlas square that was rained off last week.

This is the view from Seaton Point to Boulmer village...

Only two tetrads are exactly within my Boulmer patch, this being the most southern.

As the tide was almost high I walked from Foxton beach, north around the point to count the waders first. A good number were feeding and roosting along the shore.

Alongside the usual Turnstones and Redshanks there was a good count of 46 Grey Plovers and 2 Purple Sandpipers. 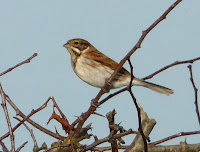 From here I moved into the fields behind the point. There were no Snow or Lapland Buntings today but the large group of small birds were back on the set-a-side land - 87 Linnets, 25 Reed Buntings, 15 Greenfinches and 8 Tree Sparrows posed for a count when they lifted up into the boundary hedge. 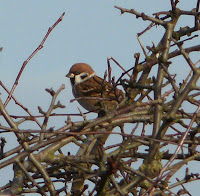 The fields had a few Grey Partridges and 3 Skylarks but 58 Lapwings on the plough was a reasonable number here. 4 Red breasted Mergansers were in the haven but I could only find 3 Eiders, the rest must be north of the village.


On the return journey along the road I took in both caravan sites. It was here I came across the bird of the day. As I skirted the gorse 2 Yellowhammers were to be expected but then a Long eared Owl flushed at point blank range, flipping over the scrub and out of sight. My first here, though I have heard of other records. The Owl's departure caused a flurrie of action from mobbing passerines in the bushes, 2 Goldcrests were buzzing then, almost as unexpected as the owl, a Treecreeper came by at ground level feeding on the low gorse trunks.

Funny, Stumpy and I had a Treecreeper feeding low on Hawthorn trunks on the Golf Course here on Sunday.

Thanks for the picture of the Oystercatchers. At any time of year, I would have to travel over 2500 kilometres to see one. 47species in 2 hours is great birding at any time of year. We have lots of spuggies, House Sparrows, as well. They are quite hearty and usually remain throughout the winter, whereas most other sparrow species including White throated, Savannah and Song migrate to warmer climates.

Good posting BB, great photo of the Tree Spuggie, I'm still waiting to see one here. You beat me too with the House Sparrows, 120, is brilliant, I only get about 20-30 max here these days.

Never mind a ringtail HH earlier in the day was a top find on the Somerset Levels.

G - This is only my 3rd Treec on the patch and the very first in the coastal strip..
S - Hi Susan Where do you live? 2500km would take me to Rome! Our House Sparrows are very sedentary too. Ringing recoveries show that they rarely stray more than a couple of miles from their birth place.

BR - I have seen unusual plumaged Chaffies resembling the african races. I dont believe they are from that far, but are just unusual forms of our own birds...

'I haven't had a Green Sand at Boulmer. Or a LEO for that matter...you've inspired me to look a bit more closely...'